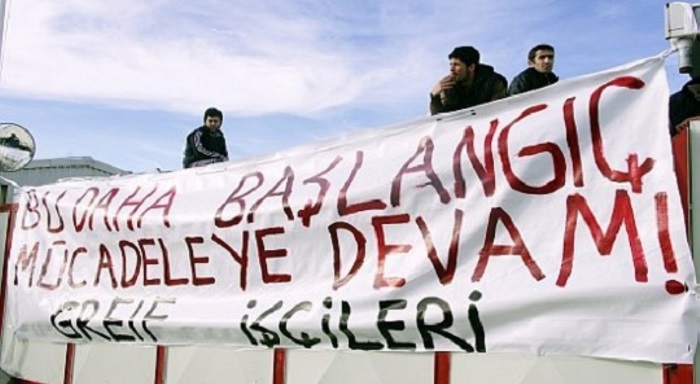 Since February 10, the workers of Greif, a manufacturer for packaging products, occupy one of the company’s four factories in Istanbul. Since March 14, the growing group of workers who support the strike also occupied the rooms of the Turkish Textile Trade Union (DISK/Textile) and demand active support from union officials. One of the workers was interviewed by Suphi Toprak (Revolitionary Internationalist Organization, German section of the FT-CI).

Suphi Toprak: Could you please introduce yourself?

Engin Yilgin: My Name is Engin Yilgin, and I am a representative for the DISK/Textile in the region of Eseyurt. (DISK: Confederation of Revolutionary Workers Trade Unions in Turkey. DISK/Textile: Union branch for textile industries.)

S.T.: Are you working for Greif, in this factory?

E.Y.: Yes. I have been working for Greif for six months. In that period we started organizing the workers. But I had to give up my job because of health issues, so I continued to participate in the process of organizing from the outside. Because of my experience with organization, the trade union offered me an opportunity to continue this process. This is how I became a regional representative of DISK/Textile. S.T.: What are you fighting for at Greif?

E.Y.: Just like in every other factory, our wages were very low and a lot of us were employed by a subcontractor. No less than 44 (!) different subcontract companies were working for Greif. Those were the most urgent problems. Also, we had a lot of workplace accidents and the workers’ rights often were dependent upon the foremen. That is why we started organizing as a Union and our colleagues used their constitutional right to become Union members. The active fighting started when the managers refused to negotiate about our problems. The workers initiated actions without waiting for the interim period that is in the law and occupied the factory, according to the principles of self-organization and the factual power of the workers.

S.T.: Did all of the workers participate?

S.T.: How does the democratic process work within the group?

E.Y.: There are 14 subdivisions in the occupied factory, each of which has its own committee. Then there is one extra committee that reviews the discussions and decisions of the other 14. Every decision has to be introduced by the workers. Since the beginning of our occupation, our all-factory committee comes together every other day.

S.T.: There was a dispute between the people in the factory and DISK/Textile, could you explain it? E.Y.: We were with DISK/Textile for one year. With the help of the core of the workforce we had a solid majority for all the decisions and we also succeeded in organizing the people from the subcontractors. With this majority we started the negotiations. But instead of giving in to our demands, the management threatened to close down the whole factory and fire the workers. With the help of our organization we could press them to re-hire one of the fired workers. Meanwhile DISK/Textile introduced a resolution against our just fight. After that, we appealed directly to DISK and asked them for support. We see us as part of the confederation and think that DISK should honor our fight according to their commitments. The heads of DISK told us that they won’t interfere with the internal affairs of their subbranches. We told them that they have to stand on our side and take concrete steps, but unfortunately they decided just to observe the situation without taking any action.

S.T.: What has happened at the party for 47th jubilee of the establishment of DISK?

E.Y.: We wanted to make our voice be heard against this form of modern slavery, i.e. subcontracts, at this event. We wanted to be the voice of the strike and make sure that DISK celebrates itself as an organization by and for workers and nothing else - but they did not give us any opportunity to speak, so we had to spontaneously occupy the stage. Unfortunately, the party was then over pretty soon.

S.T.: Did DISK change their minds after this?

E.Y.: We went to the headquarters of DISK in Åžişli and gave a public statement for the press. Ten days later they visited the strike. In order to give that visit a more official character, we again gave a press statement about our goals at the factory gates. Some of the other branches of DISK have visited us and supported us financially. But there has not been an official statement or campaign of solidarity by DISK as of yet.

S.T.: What exactly are your demands?

S.T.: What is your position regarding daily working hours? You work up until twelve hours per day, i.e. piecework. Are you demanding an 8-hour work day?

E.Y.: We work three shifts piecework with a lot of pressure. Wages are very low, that is why we need to work overtime. This is a widespread problem for all of us. Only with higher wages and a more individual rights will the workers be able to spend more time with their families.

S.T.: You occupy the factory for 30 days now. Are you planning to start producing again on your own? Which difficulties are you facing with that?

E.Y.: If the management continues to refuse all of our demands, we will continue our resistance. Until then, we want to make plans and assess, whether or not autonomous production is possible or if it would be an option to sell the factory. We cannot really anticipate the conditions right now, but we definitely think about continuing the production under our own regime.

S.T.: You will need a big network of solidarity to support autonomous production of such a magnitude. Do you have any experiences with such networks? Do you know if there are solidarity committees in other cities? What kind of measures are taken to expand the struggle?

E.Y.: The existing committees are organized according to the needs of the strike. A lot of important solidarity work has been put up, in various cities. Internationally, our network BIR-Kar supports us through campaigning and donations. On the other hand we receive a lot of support from the various forums of the Gezi-movement. Just as you’re saying, solidarity helps a lot with the production process.

S.T.: There are examples for autonomous production in Argentina. The ceramics factory Zanon, which now has been producing without bosses and bureaucrats for 13 years, stands as an important achievement for the working class. There are demands for the nationalization of the factory under workers’ control. But the continuation of the production process is very costly. Only when the state supports the process in financial terms sustainable solutions can be found in the long term.

E.Y.: The experiences of Zanon are very important. Zanon is an example from which we can learn a lot.

S.T.: Boycotting capitalist enterprises only works with financial means of the state. Furthermore, a factory under workers’ control cannot keep up the 12-hour day, the practice of using subcontracts, decreasing wages etc. to keep up the much needed profits. Also, it is almost impossible to attain credits from banks. Therefore, the state has a central position. However, it is absolutely crucial that the control remains with the workers. But this would also mean a transformation of what the concept ‘state’ means. Do you have any expectations, especially towards DISK, that go in this direction?

E.Y.: DISK has a honorable history in supporting the Turkish workers movement. DISK has lead workers resistance movements. We participated in these movements and helped with the organization. But in spite of that, the fighting sectors of the workers movement did not receive a lot of support. This is why we chose to put some pressure on DISK and DISK/Textile. In our view, the Trade Unions should belong to the workers, and nothing else. This struggle will continue until the workers finally conquer the Unions.

S.T: Are you pressuring DISK to call for solidarity strikes in the organized factories?

E.Y.: Yes. We demand strikes in all the factories that are organized in DISK and we press DISK to put together a course of action. We demand that DISK organizes an international campaign. We also put started a call: “Donate one day’s salary to the fighting workers of Greif!”

S.T.: To activate the DISK-Conferedation would support your self-production politically and logistically?

E.Y.: Of course. The actual passivity Supports only the bosses and damages the workers. To overcome this situation we have to demand the support of DISK.

S.T.: How are the negotiations going?

E.Y.: THe bosses hired a advisor for the negotiation.s. Greif is a international company and wants to avoid losses on the stock exchange. This is a real multinational as a emery. The last time we negotiated was the 10th of march, when the meeting failed because they don’t response to our jemands.

S.T.: With whom negotiate the bosses? With you or DISK?

E.Y.: The negotiations are going on indirectly over DISK/Textile.

S.T.: What is the actual situation and how do you think will it go on?

E.Y.: Of course there are lots of difficulties who are coming with a long struggle but we stay convinced like the first day. We will be a active part of the process. We have connections to other fabrics of Greif at the other site of Istanbul at the asian site and we meet us with the workers there. We will fight until the end!