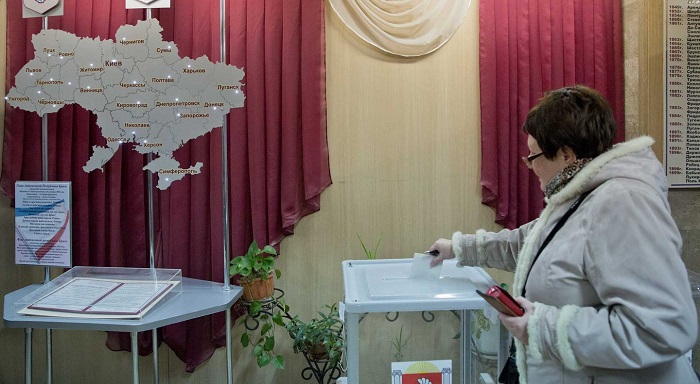 The dispute between the imperialist powers and Russia over defining the destiny of Ukraine, took a new jump with the annexation of Crimea and the city of Sevastopol – the base of the Russian Black Sea Fleet – to the Russian Federation, after 97% of the population of this strategic peninsula, with a Russian-speaking majority, an autonomous Republic of Ukraine since 1954, voted to return to Russia.

The "reunification" of Crimea with Russia is Putin’s first move as a response to the overthrow of Yanukovich and his replacement by a government allied with the United States and the EU. In the ceremony of annexation carried out on March 18 in the Kremlin, the Russian President used a strongly nationalist tone and compared Crimea’s situation with that of Kosovo (recognized by the West as an independent republic). He explained that he has no intention of continuing to advance on Ukraine’s eastern region, but, at the same time, he repeated his commitment to defend the rights of the Russians who live both in Ukraine and in other countries, that formed part of the former Soviet Union, by using "diplomatic, political and legal means," which was read as a threat of continuing to escalate.

The United States and the EU also showed their cards: as was to be expected, they condemned the annexation of Crimea and approved a series of sanctions directed mainly at individuals – a list of officials, military chiefs, and some Russian and Ukrainian oligarchs – that do not touch the heart of Russia’s economy, nor Putin’s intimate circle, while reserving for themselves the possibility of increasing the punitive measures. In addition, the United States tried to give an indication of its military power, by reinforcing the security of Poland and the Baltic countries (Lithuania, Estonia and Latvia), currently under the aegis of NATO. This escalation appears to fall within the logic of negotiation as a last resort.

Although Putin’s move sets out a challenge to the imperialist powers, in modifying the borders for a second time (he had already done it in 2008 in Georgia, with the independence of South Ossetia and Abkhazia), his intention is not to declare war on the Western powers, but to improve the relation of forces, in order to negotiate.

For their part, neither the United States nor the EU is willing to go to an insuperable break with Russia, even less, a military confrontation. But even if it remained in its current dimensions, the conflict in Ukraine has already put the relations between Russia and the West at their lowest point since the dissolution of the USSR, and it has started an international crisis that could potentially change the coordinates of the international system that emerged after the Cold War. If it is perceived that the Western powers and, especially, the United States, are not capable of prevailing and keeping order, other actors, from North Korea or Iran, up to China, could be encouraged to advance their own interests.

Up to now, the crisis in Ukraine has highlighted both the limits of the Western powers to respond to the Russian challenge and the weaknesses of Putin’s regime to reassure Russia even of its closest zone of influence.

On the imperialist front, both the United States and the European Union have agreed on imposing a first round of limited sanctions; however, they were not able to come to an agreement on a joint list of individuals affected by these measures, revealing the rifts opened up by the divergence of interests.

Despite the frictions between the United States and Russia (like the Snowden affair) and Obama’s more aggressive attitude, Russian collaboration is vital in the main conflicts in which US imperialism is still involved, like the occupation of Afghanistan, where the occupation troops depend on the use of Russian airspace for their supplies, or the possibility of keeping the prospect of a negotiated solution to the civil war in Syria.

In the case of the EU, their original flaw was exposed, to have a joint foreign policy: as the daily Le Monde summarizes, "Southern Europe pulling in one direction (nothing against Russia), Northern Europe in another (an immovable bloc against Putin) and in the middle, Germany, France and Great Britain, incapable of making a clear choice." To these differences within the bloc is added the energy dependence of the EU in relation to Russia, and its vulnerability to measures that could seriously affect the commercial ties with Moscow and worsen the consequences of the capitalist crisis. The EU imports 85% of the oil and 67% of the natural gas that it uses (some 30%, mainly that which goes to Central and Eastern Europe comes from Russia). One of the countries that would find itself most affected is Germany, that had trade with Russia of 77 billion euros during 2013, in which it exports machinery, automobiles, chemical products and other goods, and where the German businesses have an investment calculated at 20 billion euros. That explains Merkel’s position, of trying to strike a balance between condemning the Russian position and preserving these economic positions.

For his part, Putin is risking "winning Crimea" – a relatively secure position, given the presence of the main Russian Black Sea military fleet– at the expense of "losing Ukraine," the biggest country on Russia’s western border and one of the pillars of its geopolitical strategy of recreating a sphere of influence that will buffer the offensive of the United States and the EU, stop the advance of NATO, and guarantee Russia’s status as a regional power with a real impact, to have an influence on international conflicts of strategic importance. A prolonged conflict with the West would be a blow to its economy that is virtually at a standstill, with anemic growth of 1.3% during 2013. Right now, nationalist demagogy for annexation of Crimea has strengthened Putin domestically; his popularity has climbed to 70%, and he retains the support of the oligarchic elite, but that situation could be reversed, just with his sanctions, to which the main Russian millionaires, that have their property overseas, are exposed; the Western powers are seeking to undermine Putin’s domestic base.

Both the Western powers and Putin are using the card of nationalism to advance their interests, diametrically opposed to the Russian and Ukrainian workers and groups of the poor.

Ukraine’s pro-Western government – an alliance among neo-liberals, parties of the extreme right, and neo-nazi groups – encourages ancestral anti-Russian hatred, founded on the historical oppression suffered first under the czarist empire and then under Stalinism, for its reactionary ends of allying with the imperialist powers and agreeing to its submission to the IMF and Brussels, in favor of the deals of the local oligarchs. Putin is using nationalism and the Russian ethnic identity to establish in Crimea a position of strength in his relationship with the Western powers and to reassert the interests of the Russian capitalists.

Meanwhile, the workers and the groups of the poor, both in Russia and in Ukraine, are suffering ever-worsening living conditions, and they will be the ones that will pay the costs of the capitalist crisis. The integration into the capitalist Russian Federation, under the regime of Putin and the oligarchs, will not mean an advance towards the liberation of Crimea’s workers and groups of the poor. Although it may now seem a distant perspective, the only progressive solution will emerge from the united struggle of the working class against its local exploiters and their imperialist partners, on the road to imposing a workers’ and popular government.