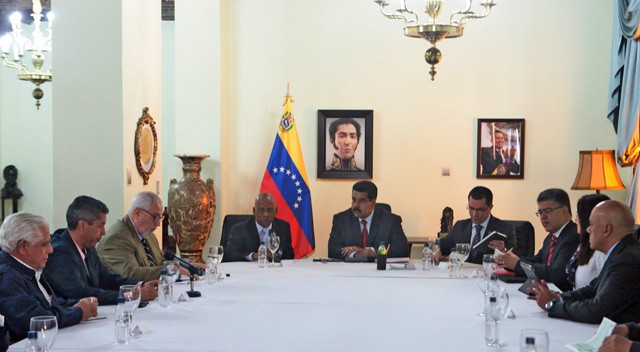 With the mediation of UNASUR, there is an advancement in agreements and negotiations with the right wing

They are preparing a reactionary solution to the crisis in Venezuela

The conversations and agreements with the big business groups by Maduro’s government are accelerating in the country. The government has been giving in on everything they are seeking, from the price increases, constant devaluations of the currency, the widespread backing so that businesses can freely fire workers, up to the now known exonerations from taxes and other advantages for big capital. The government has decided, with untrue talk in the middle of a macro-economic adjustment, that working people will have to take responsibility for the economic crisis that is attacking the country.

The government is beginning to move forward, to the beat of these agreements with employers, also in the conversations with the groups of the political opposition of the Democratic Unity Committee (MUD) with the mediation of the UNASUR chancellors, more precisely, the members of the troika composed of Brazil, Colombia and Ecuador, and the representative of the Vatican. After the most recent arrival at the end of March of a vast group of representatives of South American countries, in which they met with most of the national political spectrum, both from the government and from the opposition, the tension in the country was continuing, marked by the political impasse of a situation that it was not seeing sort itself out. But the arrival in the last two days of the UNASUR chancellors, and their meetings, at first separately, both with the government and with the groups of the MUD, and then, with everyone together this Tuesday, April 8, concluded with the agreement to begin a process of dialog that, according to the government itself, will start this Thursday, April 10. The Foreign Minister of Ecuador, Ricardo Patiño, quickly stated that "excellent conditions for dialogue in Venezuela" exist, in the middle of statements in which everything appears to aim not only at getting out of the political tension of the moment, but at agreements of longer duration. At press time for this edition, in the Palace of Miraflores, Maduro received the Governors of Lara, Henri Falcón, and of Miranda, Henrique Capriles, together with other leaders of the MUD, the Vatican’s Apostolic Nuncio, Aldo Giordano, and the UNASUR Chancellors, a meeting that is greeted as "a step for peace," but the result of which is uncertain.

On the other hand, Leopoldo López’ party, "Voluntad Popular," and also the member of the "hard" group of the opposition, María Corina Machado, have gone out to state that they will not participate in any meeting with the government, setting out that it is a matter of "a political show using the UNASUR Chancellors as interlocutors." This is not about a minor piece of information, since, as we know, it is exactly this "hard" group that has been setting the agenda of the country’s political tension since last February 12, and they have been the biggest promoters of all the marches and political actions, with violent street actions in between, this whole time. The future of the agreements to which they can advance, between the government and the bulk of the right-wing opposition, will depend, in large part, on the political movements of this group domestically.

The role of UNASUR, useful for US imperialism

The former President of Brazil, Lula Da Silva, is beginning to exert right-wing pressure on the national government, setting out that "Maduro must try to diminish political debate, to dedicate himself completely to governing, to establish a coalition policy, to construct a minimum program and to lessen tension. I am making an effort so that a solution may be found in negotiation, because Venezuela is strategic for Brazil" (El Universal, April 8), at the same time that he congratulated Capriles Radonski for not having been a part of the "extremists." This, over and above the fact that Maduro went out to answer him, that "We have not ceased to govern, not for a second," and that "I have nothing to negotiate with anyone; what there is here is a debate, a dialogue."

US imperialism has not remained motionless; rather, with the presence of Colombia among the mediators and the strong influence of the Brazilian government, and, seeing that its policy through Panama and the OAS has not yielded results, it is hoping that the UNASUR mediators will manage to make the parties advance in agreements tailor-made for it. It is not by chance, nor an act of the State Department’s benevolence, that Kerry guaranteed that "his country will not take measures relating to the situation in Venezuela, while steps, like the one that UNASUR is taking, are underway, so that the government and the opposition will maintain a dialogue," since he knows that it is a good thing that the representatives of these governments will do the work useful for his imperialist interests, that is, beginning to reduce the spaces of true and relative political independence that Chávez’ government had achieved, beyond the fact that it never managed to break with imperialism, nor even seriously to affect its interests.

It is about a real conspiracy against the working class

Although negotiations with the business groups have been carried out for months, the result of which is to demand money from working people, these have been accelerated by the pressure that the demonstrations and actions have been exerting since February on, led by the bourgeois opposition, and specifically by its "hardest" wing, supported by US imperialism. They are the same corporate groups that have always been with the right-wing opposition, as is the case of Lorenzo Mendoza, from the Polar Group, and of Fedecámaras itself, and that were at the front in the 2002 coup. What is new in the current situation is the negotiations with the majority of the political sector of the right wing, united in the MUD, with the mediation of UNASUR and the Vatican, where they will surely begin to discuss the frameworks of a less traumatic transition than the one being experienced, and that they probably reached an agreement on, beyond the fact that Maduro denies it, agreements where the only ones harmed will end up being the workers and the poor people. For that reason, we maintain that all these agreements and negotiations, in truth, what it is about is a real conspiracy against the working class.

From the LTS, we set forth that only the overwhelming intervention of the working class, in alliance with the groups of the poor and impoverished campesinos of our country, can stop the anti-worker and anti-popular course that the national situation is taking, to prevent them from continuing to unload the economic crisis on us, and prevent the right-wing opposition and imperialism from capitalizing on the political crisis.

It is necessary to demand of the unions, federations and headquarters that they organize assemblies in the workplaces, that they convene workers’ meetings to bring together the struggles of the different enterprises, with a view to a national meeting of workers in struggle, where we will pass a workers’ and people’s program and confront the adjustments agreed upon among the government, the businessmen and the right-wing opposition that are on their way. We must get mobilized, with our own methods of struggle and our own demands, with complete political independence from the government and the opposition, and give a solution that is the workers’ own, setting out quite clearly that the capitalists must pay for the crisis.