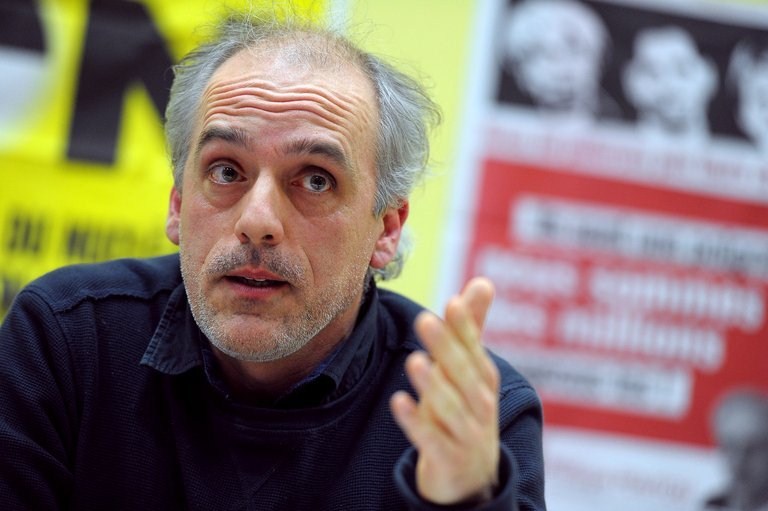 By: Revolutionary Communist Tendency, Platform 4 of the NPA

On April 22, the first round of the presidential elections in France took place, in which, with 28.6% of the votes, François Hollande, the candidate of the reformist Socialist Party (PS), turned out to be the winner. He will go to the second round with the current President Nicolas Sarkozy of the UMP (27%). Other than these two candidates, Marine Le Pen, candidate of the right-wing and xenophobic National Front (FN) gave the "big surprise," as the FN won 17.9% of the votes, becoming the third electoral force. The Front of the Left (FG), that aspired to get more than 15% of the votes with its candidate Jean Luc Mélenchon, scarcely reached 11%. For the "far left," Philippe Poutou, candidate of the New Anti-capitalist Party (NPA), got 1.15% of the votes, and Nathalie Arthaud, of Lutte Ouvrière, 0.56%.

The high vote for the National Front is an expression of anti-Sarkozy feeling, given the devastating effects of the economic crisis (that cannot be capitalized on by the PS, which has among its assets several governments that imposed measures as neo-liberal as those of the UMP) and is also an expression of the betrayal by the union bureaucracy that led to the defeat of the movement of struggle against the pension reform in 2010. Whether it is Hollande or Sarkozy that wins in the second round, both are preparing to implement bigger austerity plans. It is necessary to prepare to respond to the attacks by the future government, to the employers’ plans for layoffs, and to resist the racist and xenophobic policy of the National Front.

Below, we present an article about the dangers that the FN represents and the need to confront it, as well as about the limits of the Front of the Left of Mélenchon, who was presented as the “new figure” of the French left, and the debates that have begun within the far left of the NPA and Philippe Poutou’s candidacy.

By Juan Chingo, Revolutionary Communist Tendency of the NPA

The big advance of the ultra-rightist National Front (FN) is an alert for all the militants and voters of the left, and, especially, for the tendencies of the far left. The problems that were revealed in order to build a workers’ force counter-hegemonic to the UMP-PS duo, that has governed France for decades, that was responsible for the neo-liberal offensive, and now, for austerity policies so that the workers pay for the capitalist crisis, are of enormous importance for the inevitable class battles that are coming, whether Sarkozy or Hollande wins in the second round.

A front within the frameworks of the regime

In spite of its strong rhetoric and symbolism, the Front of the Left (FG) is an option within the frameworks of the degraded French imperialist democracy. It appeared as a more radical variant of the institutional left, with the aim of creating a better relationship of forces on the electoral terrain, in order to change its dynamics. But how can an alternative of the left, that seeks to pressure a neo-liberal center-left, represented by Hollande & Co., responsible since the 1980’s for flexibilization and the privatizations in France, Europe and the world, be credible? Whether Mélenchon ends up joining a possible future PS government or not, his politics are subordinate to the institutional "camp of the left," that, some time ago, ceased to be viewed as an alternative by neglected groups of the working class and impoverished groups of the middle classes. Mélenchon has had a long career within the institutions of the regime, as part of the Socialist Party, since he obtained his first important public job in 1978, until he broke with that party three years ago. His "political fathers" are none other than Mitterrand and Jospin, the first, responsible for the neo-liberal turn in France after the crisis of the 1970’s; the second, Prime Minister of the most privatizing government. For that reason, he is not attractive to broad popular groups, for whom the PS is synonymous with social counter-reform, and certainly not to those completely desperate because of the crisis, who seek a radical solution, and who, lacking a real choice on the left against the system, end up expressing their rage by voting for the FN or abstaining.

In other words, the absence of a real revolutionary choice against the system, that the relative strengthening of the FG as a reformist option seeks to block, does not allow a real alliance of the exploited to express itself against the France of the employers and their parties. Likewise, the fact that the FN can penetrate these social strata, is explained not only by despair and polarization, but mainly by the role of the historic and current leaderships of the organized workers’ movement, that always present the defense of employment, not from the angle of the interest of the workers, but from the angle of French capitalism. Mélenchon’s “republicanism of the left” fails to break with this philosophy, as could not be otherwise, owing to his position as a responsible politician of the state and the French nation, which led him to claim the heritage of French colonialism, the opposite of the internationalist values of the workers’ movement. It is clear that many of Mélenchon’s voters are seeking a leftist alternative to the PS. But the issue is that, without overcoming these limits of the project of the FG, the building of a workers’ and popular force counter-hegemonic to the two-party system of the Fifth Republic is impossible, which gives the FN time to present a right-wing alternative to this rotten and reactionary regime, a danger that, we all agree, must be fought and defeated.

Poutou: A good candidate, but without a party

Faced with this, the campaign of Philippe Poutou (NPA) showed the workers’ enormous need for a voice that really expresses the population’s heartfelt demands. The fact that, amid enormous internal obstacles to his candidacy and the emergence of the FG as an intermediate force, his discourse managed to make itself heard at the end of the campaign is an achievement. That it was not more audible, and, especially, that he did not get more support, is not owing to the “archetypally 1970’s” or “workerist” character of his candidacy. The chief culprits in this situation are the leaders of the liquidationist tendency within the NPA itself, who, impressed by the election dynamics that the FG was apparently acquiring, fled from the party to support Mélenchon openly. Against their opportunist blindness, the self-proclaimed "dynamics" of the FG has shown its limits: far from the 15% announced by some surveys, with a universe of votes to the left of the PS relatively stable since 1995, the votes for Mélenchon essentially express a transference of votes from the Trotskyist far left to a reformist regroupment. There is all the dynamics! But what shows that the drift of those groups goes beyond an “error of interpretation” is that, even after the election percentages have become known, they are talking about Mélenchon’s “honorable outcome,” which conflicts with the disappointment of the voters and sympathizers of the FG, in view of the votes obtained, below expectations.

If Poutou’s campaign failed to have a greater impact (beyond the reduced number of votes that it got), it was not because of any of the false reasons enunciated by those who, unfortunately, preferred to mix their program with that of the anti-liberals, but because it did not express the existence, in the NPA, of a tendency of revolutionary workers attracted to its ranks because of its role in the 2009 strike wave that used tough tactics, or in the widespread fight in fall, 2010, against the pension reform. Since its foundation, the axis of the NPA has not been on organizing a party in the main bastions of the industrial working class and of strategic services, but in the electoral “magic” that is now turning against it, with the rise of the FG. As the very history of the NPA with O. Besancenot has already shown, electoral success is not enough to relaunch a project of counter-hegemonic construction, if that is not an expression of a change in mood and combativeness of the movement of the masses.

And it is there that one must seek the main explanation of the deficiencies of Poutou’s campaign and why Mélenchon was able to channel the votes to the left of the PS: when the French workers and high-school students showed their intention to struggle to the end against Sarkozy’s government, their energies were channeled by the union leaderships towards a strategy of pressure “in extremis,” that they only sought to negotiate what was non-negotiable. And the most tragic thing is that, faced with this role of the union leaderships, neither the NPA nor the rest of the far left, like Lutte Ouvrière, was capable, not only of offering a real alternative to their policy of conciliation with the bourgeois regime and the neo-liberal offensive, but even of explaining their politics in front of the vanguard.

For a workers’ and revolutionary alternative

The NPA is now paying for these shortcomings connected to the strategic conception of a broad party without a clear class demarcation, and with an ambiguous program, that is, of having thrown overboard the Trotskyist legacy, in order to build a new party without a “strategic hypothesis,” breaking the indissoluble relationship between the strategic means (a dictatorship of the proletariat or a workers’ government) and the aim or “political end” (the classless society, that is, communism). Resolving this strategic impasse is the only “vital decision” that the NPA should make, if it wants to get out of its crisis. While the leaders of the NPA that left with the FG insist on their politics of making a strategic political bloc with variants of the bourgeois regime, like Mélenchon and the reformists, in order to “confront the FN,” our best weapon against the extreme right is our anti-capitalist and revolutionary program, that says loudly and strongly that there is another, radical alternative to the UMP-PS, that of socialist revolution. That counters xenophobia and patriotism with a proletarian internationalist discourse. That explains to the workers that the only “strong state” that will be in their favor is the one they themselves run democratically. From now on, the struggle for this anti-capitalist program, that is not Mélenchon’s program, goes hand in hand with the the need for a bold policy of a united front for action with all those who oppose austerity, but without mixing up our banners. The rise of the FN, in a setting of acute crisis, like the one Europe is experiencing, that could strike France more openly and catastrophically, makes the discussion about the type of party that is needed for future confrontations, urgent. Our fight is for building a far-left party linked to the class struggle, a revolutionary party, capable of overcoming the deceptions of the union leaderships, in the face of Hollande’s method of austerity, a party that will prepare strategically for a toughening up of the regime, if disappointment with the PS leads to a government of a new right wing, recomposed around the FN. This is the challenge for the exciting and dramatic period that is opening up for us.