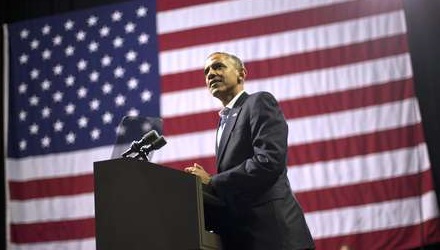 The November 4 midterm elections gave the Republicans an even more overwhelming victory than the opinion polls predicted. The Republican Party increased its power in the House of Representatives, got the majority in the Senate and kept several governorships. It even managed to re-elect the Governor of Wisconsin, Scott Walker, who imposed profoundly anti-worker and anti-union legislation.

This outcome is a disaster for the Democratic Party and a harsh setback for President Barack Obama, who will have to pass through the final two years of his term as a "lame duck." This will probably push him to a conciliatory policy with the Republicans. At least, all the signs point in that direction.

Some peculiarities of US politics contributed to making the defeat of the Democrats more spectacular: In the legislative elections, the number of voters is falling, and the percentage of the electorate that is male, white and older than 40, traditionally the base of the Republican Party, is rising. To this is added the fact that the Senate is replaced by thirds, and the fact that in this election, the seats of states with strong conservative tendencies predominated.

But the fundamental explanation is the profound dissatisfaction with the Democratic administration and President Obama, who rose with the promise of "change" and governed as the guarantor of the status quo, in the service of the imperialist interests of the same corporate, financial and political elite as his predecessor, George Bush. Not by chance, the main contributors of the campaign, that cost no less than 4 billion dollars, are the big companies, like the Koch brothers (owners of the second-largest industrial group of the US) or Paul Singer (the vulture of Elliot Management), who generously contributed to make the Republican victory possible, just like the tycoon G. Soros had contributed to the Democratic Party.

The Republican Party quickly understood that running a "negative" campaign against Obama could turn it into a vehicle of that dissatisfaction, given that the two-party system only allows the game of the alternation in power of the main capitalist parties. Another lesson that the Republican Party leadership drew from previous defeats, is that, in order to win, it had to tame the Tea Party, the wing of the extreme right, and adopt more moderate speech, especially in racial matters and on Democratic conquests, like the right to abortion.

For that reason, as a first definition, more than a turn to the right, what the elections expressed is the end of the illusions in the Democratic Party. This mood is expressed in the fact that only 38% voted (voting is not obligatory). The Democratic Party vote continues being the majority among women (especially single women), young people, the minorities (African-Americans, Latinos), those with lower incomes (up to $30,000 a year), and the intellectual elite, traditionally progressive and liberal. But those groups did not find valid reasons to go to the polls, and they stayed home.

There are other curious data that show weariness and the lack of enthusiasm for voting: the same exit polls that registered 59% dissatisfied with Obama, also found 61% with an unfavorable opinion of the Republican congressional leaders.

Obama won the presidency in 2008, in the middle of the crash of the Great Recession and after almost a decade of disastrous military adventures that led to the defeats in Iraq and Afghanistan. His big promise was putting an end to Bush’s wars. However, during his two terms in office, he increased the military presence in Afghanistan, from where the United States is still unable to withdraw; he continued the "War on Terror." And, as if history repeated itself as tragedy or as farce, he will end his presidency with the United States fighting a war, for now only from the air, in Iraq and in Syria, against the Islamic State, a group that emerged in Iraq as a result of the chaos and exacerbation of conflicts produced during the years of the US occupation.

Although Obama’s policy of intervening in Syria and Iraq against the Islamic State achieved popular support, especially after the Islamic State decapitated Western journalists and citizens who had been taken hostage, the limit Obama has is the sending of ground troops.

On the right, his foreign policy is criticized for being too soft, by Republicans and neoconservatives that are fighting for a more aggressive military policy.

It continues to be the economy ...

In the 1992 presidential campaign, Bill Clinton made the sentence, "It’s the economy, stupid," famous as a popular explanation of his victory over the Republican candidate, George Bush Senior. Since then, that sentence has expressed how employment or inflation has been influential when it’s time to vote.

The US economy went out of recession in 2009. The third quarter registered a 3.5% rate of growth (compared with a situation of virtual stagnation and tendencies to recession in the European Union). The official unemployment rate fell to 5.9% in September 2014. And the stock market reached record figures. But these relatively "successful" macroeconomic indicators are not enough to convince the great majority of the working population (the so-called "middle class") that sees that its situation has not improved. Only as an example, half of the US population considers that there is still a recession, and two thirds believe that the economy is going to get worse in the coming period.

And with good reason. The five years of recovery have benefited only the richest "1%." While corporate profits have reached their highest point in the last 85 years (1.7 billion dollars in 2013, or the equivalent of 10% of GDP), wages are at their lowest level in the last 65 years. Millions of wage earners are receiving a miserable minimum income, fixed at 7.50 US dollars an hour.

According to the US Census Bureau, there are still 45.3 million US residents, 14.5% of the population, living under the poverty line (established on an income of $23,834 annually for a family of four).

Nor has the situation of the minorities qualitatively improved. As the Economic Policy Institute reports, the African-American community has the highest national unemployment rate, 11%, followed by Latinos (6.9%).

These conditions of low wages, precarious jobs and anti-union laws have given rise to new phenomena, like the AltLabor organization, that expresses tendencies to the organization of the groups whose employment is most uncertain, like fast-food workers, and the campaign for the increase of the minimum wage to $15 an hour. Even several states that voted for the Republicans, also voted for raising the minimum wage, that had been put to a referendum (together with other matters, like legalizing marijuana).

Although both Obama and the Republicans have given signs of seeking governability, that is, not polarizing and finding consensus, in this new setting, it cannot be ruled out that situations of domestic crisis will be repeated, especially keeping in mind that the campaign for the 2016 presidential elections has already begun. This would have consequences not only in domestic policy, but also on the level of foreign policy, because it would complicate even further the administration by the US government of the constant decline of its leadership as the world’s main imperialist power.