Ukraine: The civil war and the geopolitical disputes are continuing. 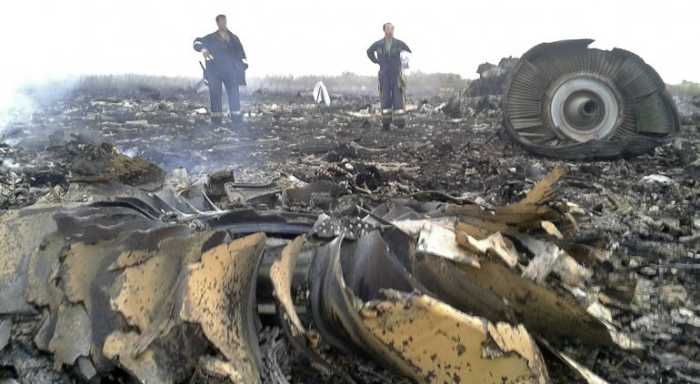 Ukraine: The civil war and the geopolitical disputes are continuing The consequences of the shooting down of the Malaysia Airlines airplane

The shooting down of the Malaysia Airlines Flight 17 airplane, that caused the death of its 298 passengers, while it was flying over the eastern area of the Ukraine, has touched world public opinion and caused a jump in the political crisis that this East European country has been going through for more than seven months, and that has big geopolitical implications as one of the fronts of the disputes between the imperialist powers (the US and the EU) and Russia.

Immediately after it became known that the most likely cause of the tragedy was the impact of a missile, all the parties began to unload the responsibility and accusations against their adversaries and to try to get an advantage. The Ukrainian government blamed the pro-Russian separatists of eastern Ukraine, that keep a large part of the provinces of Donetsk and Lugansk under their control, and accused Russia of providing them with missile batteries. The rebels denied it and blamed the Kiev government. The US and the EU accused Russia, making the argument that only this Asian power would have the technology needed to shoot down an airplane at an altitude of more than 10,000 meters. The Russian President Vladimir Putin blamed the Ukraine for the catastrophe and accused the US of hiding the evidence that would show the pictures of a US satellite that had been over the area at the time of the tragedy.

Now there continue to be speculations of every sort, and the only thing that is certain is that it was shot down by a missile from a launcher of Russian origin. It is not known who fired it, nor what the intentions were. Although the US government, faced with the lack of evidence for its accusations against Russia, disclosed on July 24 information from intelligence that Russia was not the party responsible for the disaster, diplomatic relations with Moscow (that since the crisis in Syria have already entered their worst phase since the end of the Cold War) continue to deteriorate every day, and, on the same day, the White House also disseminated that Russia recently fired, from its territory, on positions of the Ukrainian Army. This constitutes a new jump in the political and diplomatic tensions, because it would take the situation to the brink of an open war between Russia and the Ukraine, and it would press extremely for a NATO intervention in the conflict, with unpredictable consequences.

A civil war without prospects of a short-term solution

The shooting down of Flight 17, over and above who fired and whether it was a matter of a mistake in the midst of the fighting, is a direct consequence of the civil war that the Ukraine is experiencing. Since November 2013, when the former pro-Russian President Yanukovych vetoed a commercial agreement with Europe, a serious political and social crisis has been unleashed in the country (based on an economy in collapse), that kept the central square of Kiev occupied for weeks and provoked confrontations that left almost 100 dead and that ended with the President’s removal.

His replacement by a pro-Western provisional government headed by Turchinov and based on an agreement among the right-wing parties, set up an economic agreement with the EU and the IMF, that involves a harsh adjustment and a high cost for the economy, in particular for the most industrialized region of the east. At the same time, it has raised to the maximum the tensions with Russia, that was losing its last position in its old zone of influence in Eastern Europe, which led to its intervention in Crimea (the population of which has a Russian majority), that became independent through a referendum and was quickly annexed by Russia to its own territory.

The eastern regions, also with a Russian-speaking majority, wanted to follow this example and declared their independence and asked to be annexed to Russia, which they border geographically. This was intolerable not only for the new ruling oligarchy in Kiev, but for the European and US imperialist powers, and even Putin’s government tried to take a certain distance from the rebels, by rejecting the annexation, although without removing its support for them in their fight against the central government. Since April, Turchinov’s provisional government has launched a military offensive, headed by the fascist paramilitaries of the Right Sector Party, against the eastern provinces of Donetsk and Lugansk.

After months of battles, among which there were bloody and cruel episodes carried out by the fascists, like the murder of dozens of people that took refuge in the House of the Unions in Odessa and were burned alive inside the building, the Ukrainian Army has not made qualitative advances. The best known was the recovery of the city of Slavyansk, that the rebels abandoned, to concentrate forces in the capital Donetsk and the tightening of the siege on other cities and areas controlled by the rebels.

The new situation started by the shooting down of Flight 17 has shown, among other things, that the rebels remain strong and have even strengthened their defenses with new weapons provided by Russia. The visit to Donetsk of the Malaysian authorities, where the rebels handed over the airplane’s black box, made clear this situation of a stalemate of the central government’s military offensive. Thus, the uncertainty about the political future of these regions remains unchanged and even threatens to become worse.

Together with this, the weakness and political impotence of the new government headed by the pro-European tycoon Poroshenko has increased. Some weeks after having taken over, he has just suffered the unexpected resignation of his Prime Minister Arseniy Yatsenyuk, on account of the breakup of two parties that formed part of the right-wing governmental coalition. The withdrawal of parliamentary support to the government by these parties is holding back the government’s plans in the face of the country’s critical economic situation, and that they are considering among the principal measures, the approval of an energy law. Since it could not obtain a new parliamentary majority, rather than making an agreement with the Communist Party and the Party of the Regions (of the deposed Yanukovych), whom they were persecuting with criminal lawsuits, among other repressive attacks, the government has to call early parliamentary elections for October of this year.

In this way, the crisis in the Ukraine, behind which are expressed the strong geopolitical disputes between the imperialist powers and Russia, continues to deepen and to make international relations tense. The US and European imperialisms retain big differences, in facing how to deal with Putin’s Russia: while the US is pressing for harsher sanctions, the majority of the EU, commanded by Germany and, to a lesser extent, by France, remain more cautious, trying to keep a complicated balance that would put limits on Russia, but, at the same time, would not affect the profound economic relations that they are maintaining.

Despite these differences among the imperialist powers, many analysts take the situation as a new "Cold War," that is escalating menacingly, even towards possible confrontations with NATO, that, since the annexation of Crimea, has been carrying out serious preventive movements along the entire European front with Russia.