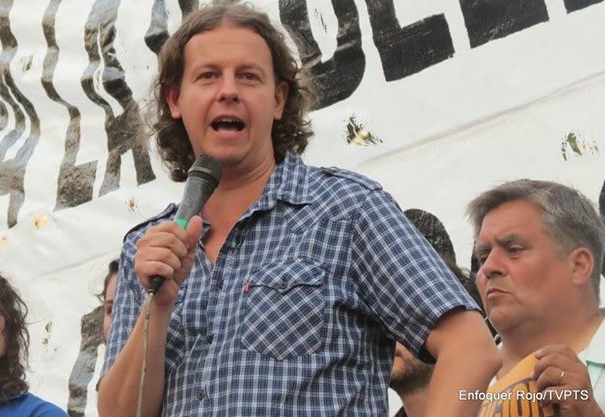 Christian Castillo, national leader of the PTS (Partido de los Trabajadores Socialistas) and a provincial deputy for Buenos Aires province for the Left and Workers’ Front (FIT), declared today in a radio broadcast that “the so-called anti-road blocking bill, which in fact targets all forms of protest or demonstration, is so reactionary that it seems to have been copied from the supreme decree issued by Pinochet in 1983 to outlaw the right to protest in Chile. This decree is still in effect in Chile today. The Kirchnerists love to talk about the ‘disappeared’ (those, mostly activists, who were arrested and disappeared during the last military dictatorship) but now they propose a bill celebrated by the mayor of Buenos Aires City, Mauricio Macri, and all the bosses, whose only interest is to see the end of protests and mobilisations by working people. Since the elections, the ruling party has been putting into place the agenda of the right wing: austerity and repression against the workers.” The Chilean supreme decree mentioned by Castillo can be read here:http://www.leychile.cl/Navegar?idNorma=16783 Castillo also pointed out that “in the bill, the government secures for itself the right to declare which demonstrations are legitimate and which are illegitimate. We already know that those in favor of the ruling party will be the former, while those against it will be the prohibited. It is clear that this project strengthens state and government despotism, transforming the constitutional right to protest into a dead letter. Finally, the deputy for the FIT Castillo said that “the false argument used by the government that ‘it was fair to carry out roadblocks in the 90s, but not now’ is nonsense. Not only because today there are more than enough reasons for workers and the people to protest, as was demonstrated by the high turnout for the April 10th strike, but also because the bill seeks to legislate beyond the immediate future. If, for example, unemployment grows and the unemployed resort to roadblocks (as happened 15 years ago at the start of the piqueteros movement), this would be banned by the proposed law and the way would be paved for repression. In addition, the government itself admits that 35% of workers have informal jobs, and frequently resort to roadblocks because they lack a union. These workers would no longer be able to protest legally. The Kirchnerists not only want to hold back protests that austerity policies are generating today, but are also doing the dirty work for future governments of Scioli, Massa or Macri.* The PTS and the Left Front will push for the broadest mobilization to oppose this pernicious bill”.

*Daniel Scioli and Sergio Massa belong to different branches of the right wing within the ´Partido Justicialista´ (Peronism). Mauricio Macri is a businessman and the national leader and founder of the right-wing Pro Party.