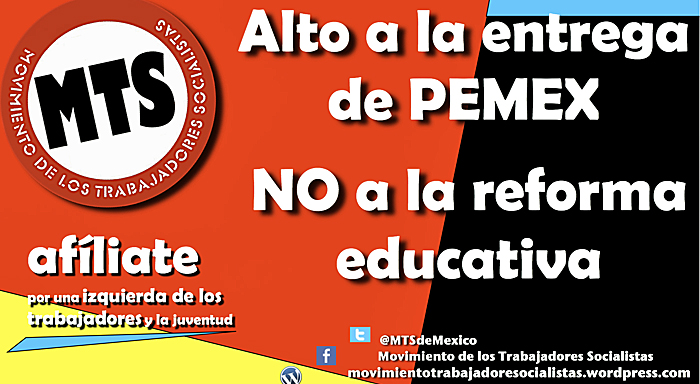 This Friday, January 31, we presented the application for registration as a National Political Association [APN] of the Socialist Workers Movement [MTS] which is promoted by the LTS, together with independent workers and young people.

This Friday, January 31, we presented the application for registration as a National Political Association [APN] of the Socialist Workers Movement [MTS] which is promoted by the LTS, together with independent workers and young people. We presented more than 5,800 memberships, and we confirmed representatives in 8 federal states, as well as our national headquarters, meeting the restrictive requirements of the laws. It is about the culmination of constant and intense activity that our organization has promoted since July 2013, and that is recorded in a strong campaign to take steps in the building of a new socialist and revolutionary political organization at a national level, that will be increasingly widespread and involved among the workers, the young and the people.

Building a socialist left, of the workers and the militant young people

This campaign has taken us to public squares, industrial areas, workplaces, schools, high schools and universities, where for weeks we thoroughly publicized our political proposal, talked with tens of thousands of young people, workers, women, and distributed thousands of papers and tens of thousands of leaflets. We used a practice that was lost among the organizations of the left, by taking our program to the working class, the people and young people, and by explaining the need to build a new political organization in Mexico. Thousands of people got to know the political proposal of the MTS, that calls for fighting independently of the employers’ parties and of the institutions at the service of the capitalists, that are currently intensifying the handover of the natural resources to the big firms. In this campaign, we thoroughly set out that only workers with their own methods of struggle, alongside militant young people and students, impoverished peasants and indigenous people, we can confront the capitalist plans and defend our rights. And for that, we need to construct a political tool and equip ourselves with a program like the one we are proposing from the MTS. And it is the case that those who present themselves as the "left" in Mexico have already shown their true character: the PRD supported and guaranteed the approval of the plans of the PRI and the PAN, like the education and labor reform, while, where it is the government, it represses the struggles of the workers and young people. While AMLO [Andrés Manuel López Obrador] – whom many workers and young people trust – has already shown, in the struggle against fraud and now against the handover of Pemex, that his policy was powerless to achieve the victory of the people’s demands, since, in order to stop the bourgeois offensive, it is necessary to develop a mobilization (and a program) that will question the entire regime and its institutions, including the Congress, where the alleged "popular representatives" devote themselves to administering the businesses of the local businessmen and the big transnational corporations.

We are promoting the Socialist Workers Movement because we want to take steps in building a new organization better than the previously existing groups of the left. In the new organization, we want to converge with workers and young people by having a joint experience in the struggle for a socialist and revolutionary perspective. An organization that will confront the attacks on democratic freedoms and the handover to the big transnational corporations. An organization that will be next to the workers and their struggles, by fighting for a workers’ emergency program and for making the capitalists pay for the crisis; independent of the employers’ parties and of their institutions. A political instrument of their own that will contribute to developing the methods of struggle of the working class, that, through the revolutionary mobilization, are those who can impose the most heartfelt demands of the toiling masses of the countryside and the city. That will fight for a workers’ government, alongside the exploited and oppressed, and to eradicate this system of exploitation and poverty, by establishing a society without exploiters or exploited.

Thousands have supported the campaign for the registration of the MTS

We who are promoting the MTS have always condemned the proscriptive mechanisms of the Mexican state, and we demand full political and electoral rights for the workers’, people’s and leftist organizations. Consistent with that practice, we call for supporting the democratic and basic right of our organization to have that registration, at the same time that we call for supporting also, for instance, the right of the OPT promoted by the SME. As we have always made clear, the quest for registration is part of demanding full legal and political rights for an organization that considers that the struggle for the workers’ and people’s demands essentially takes place in the streets and in strikes. And if we manage to wrench it from the state, the legal registration as an APN will be at the service of strengthening the workers’ and people’s struggle and of building a new political organization, a left of the workers and young people.

This campaign has allowed us to talk with thousands of female and male comrades and bring our political perspective closer to them. Many people met us for the first time and were interested in our program, and we hope to move forward together in laying the foundations of that new leftist, socialist and revolutionary organization. Many other people gave us their signature as democratic and sympathetic support for our campaign, including militants from other organizations of the left. There were organizations that backed this campaign actively (like the Front of Democratic Schools FEDEF or the Revolutionary Socialist League of Ciudad Juárez) in their cities and states, and we hope to continue deepening political discussion and joint action. We wish to thank all women and men for their support.

Now the task ahead is to move forward in extending the organization of the Socialist Workers Movement, putting everything that has been achieved in this campaign and the new networks that have emerged in the metropolitan area and in several states of the country (like Oaxaca, Chihuahua, Sinaloa, Guerrero, among others), at the service of building the MTS and promoting it in the centers of work and study.