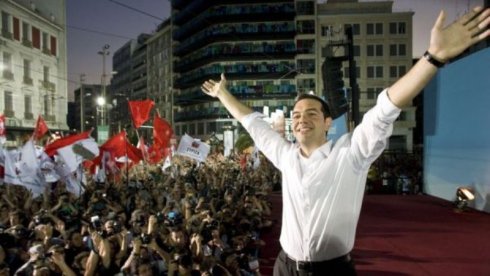 The Meaning of Syriza’s Victory in Greece

The overwhelming victory of Syriza (Coalition of the Radical Left) in Greece broke a decades-long hold on power by the two historical parties of the Greek ruling class, the social democratic Pasok and the center-right New Democracy. Syriza’s leader, Alexis Tsipras took power on promises to reverse the widely-despised austerity program and re-negotiate Greece’s international debt repayment with the so-called troika of the EU, IMF, and European Central Bank (ECB).

Immediately after the election, markets plummeted across Europe as the European imperialist bourgeoisie was sent into a panic at the prospect of the new government refusing to pay Greece’s creditors.

However, despite its calls to end austerity and promote "social justice", what Syriza represents is an attempt to salvage capitalism in Greece, not overthrow it.

Greece in the Era of Capitalist Crisis

The election of Tsipras points to the widespread rejection by the Greek people of the austerity regime imposed by the troika, which has placed the burden of the capitalist crisis squarely onto the backs of the working class and the poor.

Unemployment in Greece today stands at 26%. Among youth, the figure is an astonishing 50%. One-half of the entire population lives below the poverty line. This situation has been made all the more dire by privatizations of social services, wage cuts, and an increase in the minimum retirement age, all dictated by the major European imperialist powers.

The Greek people have bravely fought the austerity regime, with workers, students, and other oppressed sectors leading massive demonstrations and taking part in more than 30 general strikes in the past six years – repeatedly clashing in the streets with the police, the repressive forces of the state, and the fascist right-wing.

Syriza’s program is primarily one of Keynesian, not anti-capitalist measures, with demands such as an increase in the minimum wage, the rehiring of laid off state workers, and the restoration of pension plans, coupled with the demand to end austerity.

What Tsipras promised above all in the days leading up to the elections was a guarantee of "political stability and economic security". He assured the governments of Europe that Greece would not back out of the EU nor would it take unilateral steps on the debt.

Tsipras states that the priority of the Syriza government is to "renegotiate the Greek debt along with its partners" thereby seeking to position itself as a respectable party, one which will not challenge the fundamental institutions of capitalism, but will negotiate repayment terms which are more favorable to Greece.

Further, Syriza has pledged to keep the police and the armed forces–the forces which protect the capitalist state–intact. Syriza’s new interior minister, Nikos Voutsis, has said that while he opposed the police treatment of demonstrators, he would "respect" their work. This is the same police force which has repeatedly attacked and violated the rights of striking workers and immigrants, and which counts among its ranks several officers with links to the neo-nazi Golden Dawn party.

What Syriza aims to create is a government of national unity, not a government of the workers and the oppressed. Its minister of health has even gone so far as to say that Syriza no longer considers itself to be a left-wing party. Above all, Syriza seeks to contain the massive upheaval and unrest that has arisen since the Greek crisis began in 2008.

Alliance with the Nationalist Right

Falling just shy of the 151 seats needed to form an absolute majority in parliament, Syriza looked to form a coalition in order to be able to form a government. Within 48 hours of Syriza’s victory, the party declared that it would form a coalition with the right-wing party ANEL (Independent Greeks) party which opposes the austerity regime of the troika on nationalist principles. Tsipras later announced that the government’s new Minister of Defense would be ANEL leader Panos Kammenos, who favors a continued membership in Nato and calls for a strengthened national defense program.

While sharing an opposition to the austerity program, nearly all of ANEL’s platform would be abhorrent those who voted Syriza into power. A supporter of the Greek Orthodox Church, ANEL has declared its fierce opposition to gay marriage and LGBT rights. It has also pledged to crack down on illegal immigration and speed the deportation of undocumented immigrants.

In its social policies, Syriza has already conceded to its right-wing coalition partner and the Greek Orthodox Church by backing away from advancing even democratic demands on behalf of women and the LGBT community.

It is telling that the cabinet of Alexis Tsipras has 12 members and none of them are women. Indeed, there has been a deafening silence on questions relating to the struggles of women in Greece. The Greek feminist group To Mov (Purple) noted that "Throughout the campaign, various issues were never discussed: equal pay for women, violence against women, and unpaid domestic work".

Tsipras has also shied away from his earlier pledge to offer LGBT couples the right to adopt children, stating in January that this would no longer be a part of Syriza’s program.

The Positions of the U.S. Revolutionary Left Toward Syriza

While several groups in the US who identify as part of the revolutionary left have called Syriza’s alliance with the nationalist ANEL party troubling, few if any, have pointed out the fundamentally reformist character of Syriza, which makes it incapable of presenting an alternative to the workers and the oppressed in Greece.

The International Socialist Organization, aligned with the International Workers Left–a member of the Left Platform within Syriza, calls upon the left to "challenge [the government] to turn Syriza’s radical commitments into action and real change." Many other groups, such as Socialist Alternative, have offered variations on the same formula.

For a Revolutionary Party of the Workers in Greece

Revolutionary socialists defend Greece against the imperialist vultures of the troika who seek to privatize Greek resources and services and unload the worst effects of the crisis onto the workers and the poor. However we point out at every juncture the class-collaborationist character of the Syriza government, which offers no lasting solutions to the working class.

We call for the construction of a true revolutionary party of the Greek workers, a party which fights for all oppressed sectors of society, including women, the LGBT community, and immigrants, calls for the nationalization of the banks, major industry and foreign trade, and stand as an opposition to all reformist governments which concede to the right-wing and the international institutions of capital.