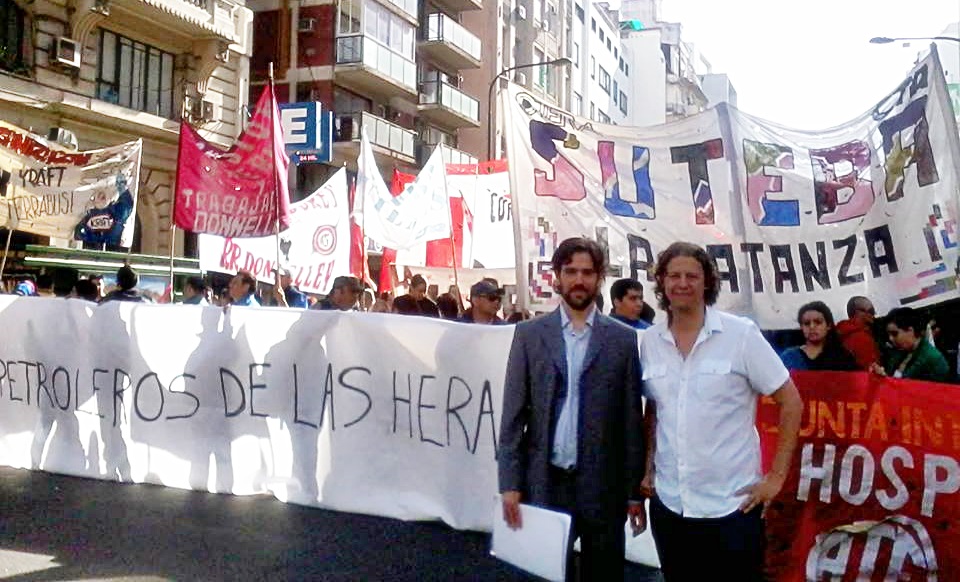 (PTS/FIT, 02/25/14) The Left and the Workers’ Front will give a press conference next Thursday 27th at 4 p.m. at the National Congress to announce an important emergency bill, which states that every worker should earn at least a living wage and prohibits suspensions and layoffs for 24 months, according to what national deputy Nicolás del Caño (PTS/FIT) informed today. The bill that will be presented by Nicolás del Caño together with Nestor Pitrola, Pablo López, and with legislators of Buenos Aires province and the CABA (Ciudad Autonoma de Buenos Aires), Christian Castillo and Marcelo Ramal respectively, states an emergency raise on the wages of $3.000 (Argentinean pesos) for all the workers and establishes a minimum wage of $9.000. Furthermore, in order to confront the loss of purchasing power due to inflation, the bill demands that all the salaries be adjust monthly according to the changes in the cost of living. Moreover, the minimum retirement pension will be 82% of the minimum salary. The FIT (Left and Workers’ Front) Project has been made under the initiative of Nicolás del Caño and was crafted by the three parties that are part of the FIT; it bans suspensions and layoffs for the term of 24 months and states that this clause will be applied to all the workers whether they are registered, not registered or registered in an irregular way, or any other contractual form. At the same time it includes the immediate nationalisation of any enterprise that shuts down, under workers control. “The sense of this bill is to defend the lives of the majority which are now being attacked by the high inflation, the increase of the striking raise in fares and utilities, the furloughs and layoffs, and the ceiling on the wages´ raise that the national government along with the governors and the bosses want to impose to consolidate this theft to the workers’ salaries. Meanwhile, the unions’ bureaucracies are doing nothing to confront this economic adjustment”, said the national deputy from PTS / FIT. Similarly, the Buenos Aires province deputy Christian Castillo stated that “this bill will be presented in the National Congress and all the legislatures where the FIT holds seats, Buenos Aires province, Buenos Aires city and the provinces of Córdoba, Santiago del Estero, Neuquén, Mendoza and Salta". Castillo said that “each economic crisis that Argentina has been through in the last 40 years finished with a looting at the cost of the living conditions of the working class, in favour of a small group of big capitalists. They want to repeat this story and the bill from the Left Front can be a tool to make the bosses and capitalists pay the crisis this time. We know an emergency law with these characteristics will meet the resistance not only of the government legislators, but also of those who represent the interests of the bosses and bankers, such as the “Frente Renovador” and the PRO (the ruling party of Buenos Aires City). In Santa Fe province, governed by Hermes Binner’s party (Socialist Party), the province only replied with indifference to the firing of the young workers at the factory of household appliances Liliana. Also, the struggle against layoffs is increasing in Kromberg and the auto part plants in Cordoba province, Valeo, Lieter y Liget, occupied by its workers in protest against the dismissals. This is why we are putting this bill under consideration of all the workers’ organizations”.