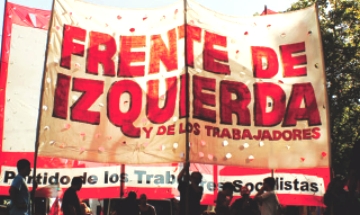 This new electoral challenge for the Left and Workers’ Front (FIT) takes place at a time when the bosses’ parties are in fierce dispute with each other. The FIT, which is composed of the PTS, Partido Obrero and Izquierda Socialista, has gained political recognition since taking part in the 2011 elections..

Trotskyists have a strong presence on the Argentinean anti-capitalist left and have been involved in a series of struggles in recent times which have helped the FIT to gain recognition among workers and youth.

This can be seen in the development of our parliamentary work in Córdoba and Neuquén provinces, particularly in the latter where Raúl Godoy submitted a bill proposing that no member of parliament or state official should earn more than a teacher with 20 years’ service. [1]

The FIT was also responsible for:

• Exposing the illegal surveillance on trade union activists and leftists carried out by the National Guard, which eventually led to the resignation of Minister of Defence Nilda Garré.

• Taking the lead in defying President Cristina Kirchner’s ban on left parties entering the Plaza de Mayo for the rally on March 24 marking the anniversary of the 1976 coup.

• Denouncing the criminal mismanagement of the floods in the city of La Plata [2], organizing solidarity with the victims, and fighting for the punishment of those responsible for the catastrophe.

• Campaigning for life imprisonment for railway union leader José Pedraza and the thugs responsible for the murder of Partido Obrero member and student activist Mariano Ferreyra in October 2010.

• Supporting the struggle of Volkswagen workers in Córdoba province against dismissals and against fraud in the rank-and-file delegates’ election in that factory, which led to resignation of Omar Dragún, the provincial Minister of Labour.

• Playing an important role in victories such as that at the Lear car components plant and in the internal struggle in the Buenos Aires province teachers’ union, where the FIT won control of 11 branches that were previously dominated by allies of the Kirchner government.

Following its success in the 2011 elections in Córdoba and Neuquén, the FIT will be fighting in the coming election to return left-wing deputies and senators who will use their parliamentary positions to support extra-parliamentary actions by the working class.

There are important differences between the groups that make up the FIT which have created barriers to it becoming a unified party. This is not a whim. Our discussions are public and can be followed in our press and on our websites. In contrast to the bosses’ parties, we do not hide our differences. However, this has not prevented us from working together to develop the FIT as a militant electoral front in the fight for class independence.

Vote for the FIT and actively participate in its campaign!

A balance sheet of a decade and our challenges

After being in power for a decade, the Kirchner governments have been a disappointment to those who voted for them. This can be seen in the widespread but passive support given to the general strike in November 2012. In spite of the government’s rhetoric and the narrative of their academic supporters, the balance sheet is that there have not been any significant ‘structural changes’ since the 90’s. The economy is still dominated by foreign capital and the local economic groups who were behind the 1976 military coup. The land still remains in the hands of the same old oligarchy. In addition, the soya production has become a “gold rush” and therefore has had negative impact on the local population, who used to till the land but have now been displaced. Almost 40% of the workforce is off the books, while the rest is working in other forms of casualised labour, i.e. outsourced or on temporary contracts – this is affecting young workers the worst. For most workers there still in place ‘flexible’ working conditions imposed during the 90’s – and this means working at the weekends, long working days of up to 12 hours. The big multinationals and the government count on the support of the local trade union bureaucracy and the provincial Ministry of Labour.

The new energy in the trade union movement has come entirely from the left shop steward’s committees have been won back by rank-and-file activists. At a moment when the taxes paid by employers are among the lowest (4% as opposed to 27% in the EU), more and more workers are paying tax on their earnings and the VAT remains at 21% - one of the highest rates in the world. There is no tax on income from financial speculation or on undeveloped land. The mining sector is protected by a law dated back during the Memen which is opposed by the local mining communities. The country has become an importer of energy and 12.000 billion dollars are spent on this every year. The partial nationalisation of the YPF oil company is a joke: the ‘big idea’ of the state is to sign one-sided contracts with the American multinational Chevron – the same company which was accused by the government of Ecuador for using drilling methods that contaminated the environment. The continuing use of private firms to run the underground and the railway system has not only resulted in poorer services but led to two major accidents. Home ownership is something unaffordable for the working class; 3 million people live in emergency housing when the bubble in the construction sector has only serve speculative ends.

It has been a decade where the politicians in government have not only guaranteed the profits of the employers but they have enriched themselves as much as they did in the Menem era.

Government and opposition politicians are equally in favour of devaluing the currency in order to increase profits at the expense of workers’ wages. The employers are preparing right-wing solutions to apply after the Kirchner era. They are miscalculating the balance of forces. In Latin America the masses are intervening and saying here we are. This is the case not only in countries whose right-win governments are in alliance with the USA, like in Costa Rica and Chile – where the students have been on the streets for the last three years and are now coordinating actions with dockers and miners, but also in those countries with centre-left governments, as in Brazil, where the massive demonstrations have exposed the true face of the Brazilian ‘miracle’. In addition, in Uruguay primary and secondary school teachers have been on strike for more than two weeks against the government of the Frente Amplio, and in Bolivia there was a strike called by the COB against the change in the pension legislation promoted by the government of Evo Morales. The COB has also made a call for a workers ‘party and within this movement some sectors are fighting to give it an independent character.

The centre-left parties are prepared to do any kind of shady ‘businesses’ in order to win votes – Pino Solanas and the Libres del Sur are in a front with politicians in favour of privatization and bankers. The candidate in Rosario city, Binner, has supported Capriles in Venezuela. The FIT is standing hundreds of working class and young activists as candidates. The FIT is here to tell the people that the left can provide a solution. At a time when the Peronist party and the right-win trade union bureaucracy are in fierce dispute with each other the FIT is here to say that the left has to put forward an independent policy for the working class. The FIT is a necessary condition to face this challenges but it is not enough. The political battle among the broad masses for the building of its own party and to gain its own political independence is still to be done. There remains a lot to be done, for example to gain positions in trade unions, in shop-stewards’ committees, students’ unions, etc. in order to build a workers’ alternative that can put forward a programme for the entire working people. We will use the election and the interest around them to talk about the need to overcome the experience of peronism and against class collaboration policies.