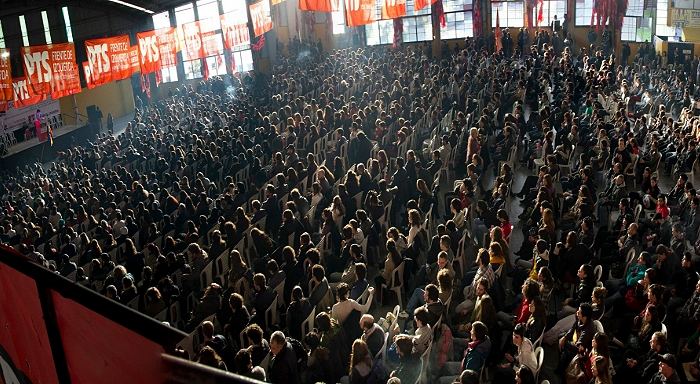 22 Aug 2013 | The International Conference of the Trotskyist Fraction – Fourth International, an international organization that includes Argentina’s PTS along with Brazil’s LER-QI, Chile’s PTR, Bolivia’s LOR-CI, Mexico’s LTS-CC, France’s CCR, Spanish State’s CcC, RIO group from Germany, Venezuela’s LTS, Costa Rica’s LRS and members from Uruguay, is taking place in Buenos Aires this week. In the sixth year of the capitalist crisis, and in the context of a new political and class struggle phenomena –of which the events in Egypt are it’s more severe expression- the conference is developing a rich discussion regarding the prospects of progress in the construction of a strong revolutionary worker’s organizations, both nationally and internationally. In this context, the International Rally will held next Sunday August 25th 4 p.m at the Indoor Stadium of Atlanta Club, featuring speakers and greetings from all the delegations. This new conference of the FT-CI takes place during another anniversary of the assassination of Russian revolutionary Leon Trotsky by a Stalinist agent. Along with the house and museum ‘Leon Trotsky’, our comrades from Mexico’s LTS-CC will introduce the third volume of the collected works, “The Struggle Against Fascism in Germany”. 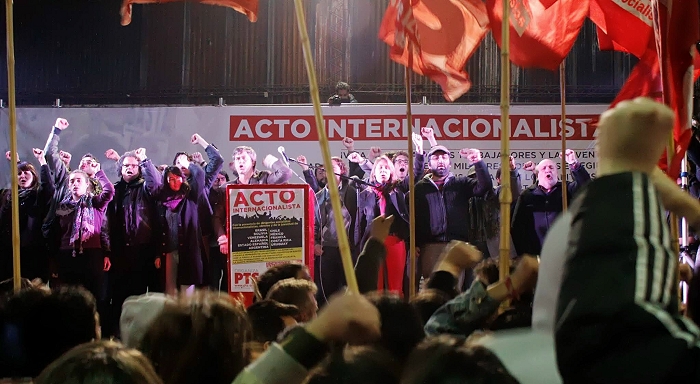 Brazil: Then june demonstrations shook the country marking the beginning of a new stage.

Brazil’s June demonstrations shook the country and signaled the beginning of a new stage. Hundreds of thousands of young people and workers took to the streets; they stopped the bus rate increase and continued mobilizing to denounce the corruption of all governments. While governments spend billions of dollars in World Cup preparation and in the Pope’s visit, people continue to suffer from the terrible quality in Brazil’s health and education programs as well as the police repression of black people in the suburbs. We, the members of the LER-QI, feel proud of being part of this process. Along with hundreds of young people we participated in different actions, put up barricades, confronted the police and defended the perspective of unity among the youth and the working class.

The LER-QI stands for politics of class independence, so that the working class, in alliance with the youth that took the streets, can fight for their rights and also for a revolutionary alternative to the capitalist system. While the PT’s government continues to publicize Brazil as a regional power, there are still millions of workers that are victims of with precarious jobs, misery, racism, police violence and plenty of exploitation.

Chile: “alongside workers, students took to the streets”

Since 2011, demonstrations in Chile have changed national politics and the political regime’s situation. By questioning the structure of Pinochetism, which had remained unchallenged for a long time, the demonstrations pushed the “Concert of Parties for Democracy” known as the Concertacion Coalition into a deep crisis. We, the students, by struggling in the streets, in the barricades, with hundreds of occupations nationwide and thousands of people on the streets, have deeply challenged the Pinochet political regime. We have also questioned the ‘Coalition’ that has sheltered and consolidated the structure and pillars of the regime. Today, students and workers are taking to the streets side by side. In the example of postal workers electing rank-and-file delegates, we witnessed the emergence of democratic forms of self-organizing, a political phenomena unheard of for a very long time. As students we know that the only way to fight for free education is along with the workers.

From this process of struggle that began in 2011, in which now workers are beginning to take a stand, using the strike and mobilization of July 11th as an example, we are drawing one major lesson: the need to build revolutionary organizations. The Revolutionary Workers Party (PTR) came to Argentina to attend the FT-CI’s International Conference because we believe it is necessary to build a political alternative for workers, students and youth not only in Chile and Argentina but worldwide.

We’ve just come from taking part in two weeks of working class struggle and demonstrations in Bolivia that were like nothing seen in the last 25 years. Evo Morales’ government harshly repressed the demonstrations, arresting more than 400 brothers and sisters. 22 miners have been prosecuted so far, and there is a political persecution of the unions that support the Workers’ Party.

We came to share our experiences with brothers and sisters and other organizations from Latin-America and Europe, in this new stage of capitalist crisis that is not only developing mass and youth movements- like in Brazil, Turkey, and other countries- but in which the working class is starting to take part. We came to discuss how to promote an international movement for a socialist revolution.

“We are organizing against the Mexico Pact”

In México, Pena Nieto’s Government, the PRI, together with all the parties of the regime, PAN and PRD, declared war on the workers and the people last week by submitting an initiative to reform PEMEX energetic (Petróleos Mexicanos), which means a hard blow to national sovereignty and to the position of the country’s strategic resources. The Mexico Pact is a reactionary agreement, which has been implementing labor reforms in the last few months and is the continuation of the policy that aims to militarize the country. Despite these harsh attacks, we, the workers and the people, are organizing against the Mexico Pact. Mexican teachers have started a strike in five states yesterday, and are picketing in the Zocalo in Mexico City. Workers in Jalisco have recently occupied a Honda factory demanding freedom of Association. After the uprising of the #yosoy132 movement, we keep on organizing with the perspective of building a great workers and youth revolutionary organization in our country.

Spanish State: “We are confronting with the heirs of Franco’s regime”

The Spanish State is one of the countries where the crisis has hit the youth and workers harder, and that’s why, in the last few years, these sectors have been increasingly giving greater responses to the capitalist crisis.

We are also confronting a political system, unveiled before the eyes of millions of people as a democracy for the rich. It’s the ’78 constitution’s regime that is going through an increasingly severe crisis, which not only affects the government and the PP (party of current President) but all the regime’s parties, the monarchy and its main institutions.

We, workers and youth, need to lead the way out from the debris of the heirs of Franco’s regime, based on the mobilization of the masses, and put an end to the government that serves the capitalists, replacing it with a workers’ government. We are the only ones capable of solving the major problems of unemployment, housing, job insecurity, and also the great democratic demands such as the end of monarchy and the right to citizenship for Basque, Catalan, and other nationalities that make up the Spanish State.

Turkey: millions of people took the streets to confront the repression

This Turkish summer, millions of people took to the streets to fight against the State’s repression. However, democratic protests failed to bring down the government because they did not attack the foundations of the system. Only the powerful working class of Turkey and Kurdistan can unite all the oppressed and overthrow capitalism. That’s why we need an international revolutionary workers’ party.