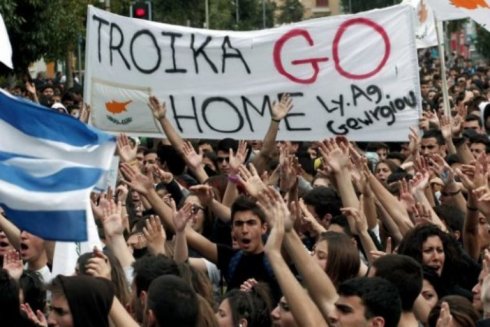 The Greek people voted against the debt, but Syriza gives into the Troika

On January 25, the Greek people voted against the Troika, the austerity measures and cuts that the Greek government has been enacting over the past few years. The huge number of votes for Syriza expressed profound social unrest and expectations of being able to stop the memorandum and the rescue plan imposed by the Troika (The European Central Bank, the IMF and the European Commision).

Despite the campaign of fear from Brussels and Germany, who announced that there would be “chaos” if Syriza won the election, the majority of votes were against continuing to accept the Troika’s impositions and blackmail.

The rejection of the Troika’s “memorandum” was one of the central issues of Syriza’s political campaign, which stated that under no circumstances would they accept continuing the bailout under the current conditions, as previous governments had done. At the same time, Syriza called on the Greek people to trust that a deal that would “beneficial to all parties” could be reached, for both the Greek people and for the creditors and European partners.

The deal signed with the Eurogroup and the list of reforms presented by the government of Alexis Tsipras was reached by giving in to all of the Troika’s impositions, with the only difference that they had now gone on to call themselves “the institutions”. This fact has been strongly questioned by many forces close to and within Syriza and by other organizations of the Greek left.

The Troika has put Greece against the ropes ever since the European Central Bank decided to stop accepting Greek bonds as a financial guarantee for Greek banks. At the same time, the ECB granted liquidity to continue the course of the market coup through the outflow of capital. In this situation of immense pressure on Greece, the strategy of the Tsipiras government was to concede more and more at the negotiating table to achieve an agreement, even to the point of accepting what until a few days ago seemed unacceptable: the extension of the bailout under the supervision of the “institutions”.

The neoreformist strategy of Syriza showed its limits. In the first place, they created an illusion that it was possible to reach an agreement that would be “beneficial to all”, which quickly proved itself to be incorrect, because those who benefit from this agreement are the creditors who continued demanding the payment of the debt which is suffocating the Greek people.

Secondly, Syriza stated that they could obtain allies in the European governments, such as France and Italy. The reality is that all of the governments aligned themselves with Germany and Brussels to pressure Greece to “respect their commitments”. Finally, they moved forward under the premise that it would be possible to gain favorable measures for the Greek People ´´without taking unilateral actions´´, operating with the consensus of the EU.

The reality is that the agreement reached not only accepts the extension of the bailout plan and supervision of the Trokia, but also puts off the basic demands of the Greek people such as the increase in the minimum salary, the increase in pensions, the reversal of privatizations and the end of the bank led evictions, as well as many others. Worst of all is that the Greek government has presented this important retreat as if it were a triumph, something which will prepare future retreats before the Institutions.

Syriza has been guided by a program of timid reforms and the idea that the reactionary institutions of the EU can be ´´democratized´´. Above all, they have adopted a strategy of ´´negotiating´´ the debt instead of putting forward that the crisis should be paid by the Greek and European Capitalists. They spread illusions of the possibility of a win-win agreement with the EU, they saw allies where they didn’t exist and ended up accepting all the conditions imposed by the Troika.

The critiques from inside and outside Syriza have come immediately. From the declarations of the EU deputy Manolis Glezos, the celebrated composer Mikis Theodorakis, those of the Minister of Energy Panagiotis Lafaanis, and the articulate critiques of Sthathis Kouvelakis based on the Left Platform inside of Syriza. Additionally, there have been statements of leftist organizations such as the KKE (which has called for a mobilization in Plaza Syntagma this Tuesday) and Antarsya. At the international level there have been mobilizations in solidarity with the Greek people in Germany, France, the UK, as well as other countries which could be the beginning of a stronger international campaign.

Going in the opposite direction are the statements of one of the leaders of the spanish Podemos party, Inigo Errejon, who said that they would not forgive the Greek debt in case they arrive to government and that they wanted to “recoup this money.´´ It’s a discourse that places them in the same camp as the Troika and those who demand that Greece fulfill its obligations.

In order to support and invigorate the Greek people in the unequal battle they will face in the next months, it is essential to build an international campaign for the cancellation of the Greek debt in Germany, France and Spain, which are the main creditors of Greece, and for the non payment of the debt in all of the countries of Southern Europe.