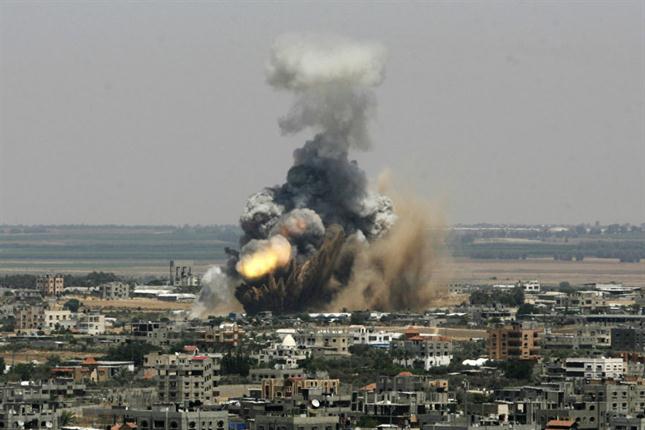 Stop the military offensive in the Gaza Strip

From the early morning of Monday, July 7, the State of Israel launched a military offensive called "Protective Edge" on the Gaza Strip, consisting of the massive bombing of this densely populated Palestinian territory and threatening a ground attack.

In just two days, it has launched from land, sea and air more than 400 tons of explosives, causing serious material damage, more than 60 dead, mostly civilians (with a constantly increasing number) and hundreds of wounded. The offensive now is the biggest since 2012, and a ground attack is likely because of what has been mobilized, hundreds of tanks and armored vehicles and thousands of soldiers on the border. The Defense Minister, Moshe Yaalon, warned that the military operation "will not end in a few days."

New pretexts for the military offensive and repression

Prime Minister Benjamin Netanyahu’s Zionist government, of the Likud ("The Consolidation") party, that governs in coalition with the ultra-rightist Israel Beitenu ("Israel our house") party of Chancellor Avigdor Lieberman, is trying to justify these new bloodthirsty attacks by the launching of missiles by Hamas, the Islamist movement that governs the Gaza Strip, after having prevailed in the 2006 elections. The Zionist ultra-right wing, headed by Lieberman, has been strongly pressing for a military action and even announced the break up of the electoral coalition with the Likud, although it is not breaking with the government. The offensive also has the explicit backing of US (and European) imperialism, that has defended "Israel’s right to defend itself."

The escalation had begun some weeks ago with the kidnapping of three young Israelis, subsequently found dead on the West Bank, a crime that Israel attributed to Hamas, and that neither this organization (nor any other Palestinian organization) ever admitted. Then Netanyahu started a series of "selective" bombardments and night searches with commandos that burst into dozens of Palestinian homes "in search of criminals." This operation ("My Brother’s Keeper") caused several deaths and more than 400 people arrested, mostly Hamas militants and their relatives, which provoked mobilizations and protests in several West Bank cities, harshly repressed by the Zionist army.

Likewise, the government encouraged anti-Palestinian hatred, which caused several acts of harassment of the Palestinian population by right-wing Israeli groups, and which ended with the savage murder of a Palestinian youth in Jerusalem, burned alive by young Israelis. The pictures of the brutal beating inflicted by the Israeli police on a 15 year old Palestinian boy, arrested during the repression of a march also went around the world. In this way, Netanyahu’s government is directly responsible for all these crimes and violations of human rights, as well as being the main promoter of the confrontations between the Palestinian and Israeli populations.

The real objectives of the attack on the Palestinian people

This new offensive has nothing to do with the sham of "protecting the safety of its citizens," the reason for which Israel has systematically rejected and hindered any advance of a "peace plan," even when they are tailor-made for it and have US backing. The main objective of the Israeli government is to break the unified government agreement of the West Bank and the Gaza Strip, signed in June by Al Fatah and Hamas, because it could possibly strengthen the Palestinian negotiating position (despite the fact that the Palestinian Authority has been subjected to the policy of Israel and imperialism), and it is part of Israel’s strategy of continuing to move forward with the occupation, through the settlements of Jewish colonists in the territories occupied in 1967, and to hinder any prospect of Palestinian national self-determination.

Facing the escalation of the situation, Abbas, following the line of Russia and the Arab states, that are taking a stance for an immediate ceasefire and have requested a meeting of the UN Security Council, condemned the Israeli attacks and is betting on "international pressure" on Israel to stop them. On the other hand, Hamas is calling for fighting; it has increased the missile launches (that have a minimum destructive effect); it promised an "earthquake" if Israel invades the Gaza Strip and has even declared all Israelis "legitimate targets."

It is unknown how far the military escalation will go and the effects it could cause in a region as unstable as the Middle East, where the big Zionist military machine has suffered big setbacks, as in Lebanon in 2006. But it is certain that we, all the oppressed and exploited in any place on earth, must show solidarity with the Palestinian cause and fight for the immediate cessation of the Israeli attacks with the perspective of ending the occupation of the territories of historic Palestine and the oppression of the Arab peoples by the State of Israel.

Keys: The State of Israel

It is an artificial state, set up by imperialism with the support of the UN in 1948 and based on the ethnic cleansing of the native Palestinian people from those territories. It has used war, bombings and other military operations as a customary method to keep control over the Arab peoples. It has legalized torture and selective assassinations of leaders and militants.

For that reason, there cannot be a fundamental solution without dismantling this state based on ethnic cleansing, and building a free, independent and secular Palestine on all of its historic territories, where Palestinians and Israelis can live together in peace, a workers’ and socialist Palestine.

The military offensives and blockade on the Gaza Strip since 2006

June 2007: Hamas took over the government in the Gaza Strip. Israel established a tight commercial and financial blockade by air, sea and land.

November 2012: Operation Pillar of Defense. Israel shelled the Gaza Strip for 8 days, killing almost 200 Palestinians. Pretext: Launching of Hamas rockets. Some exceed 40 km in range and reach Tel Aviv, although without extensive damage, and are intercepted by the Iron Dome anti-missile system.

Al Fatah: Main tendency of the Palestine Liberation Organization (PLO), whose historic leader was Yasser Arafat. At the end of the 1980’s, it recognized the State of Israel and went to a policy of conciliation as part of its strategy of creating a Palestinian state in the territories occupied since 1967. With Arafat’s death in 2004 and the new leadership of Abbas, it advanced to a policy of open collaboration, and it is the ultimate cause of the growth in the popularity of Hamas.

Hamas: A Palestinian organization founded in 1987. Its strategy is to establish an Islamic state on the entire historic territory of Palestine, and it is in a more radical position than Al Fatah, since it continues without recognizing the legitimacy of the State of Israel, although in recent years it has given signs of wanting to moderate this position, and it keeps a policy of armed resistance to the occupation.