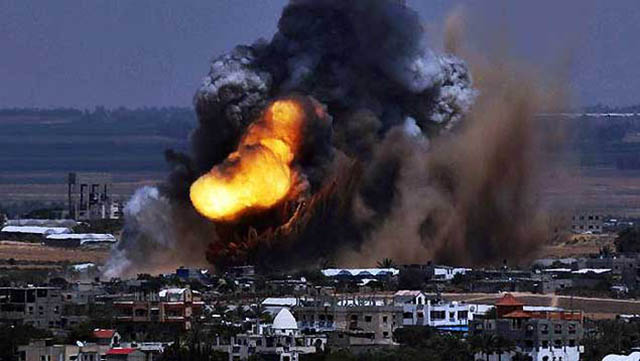 Stop the Zionist invasion We must support the Palestinian resistance

The Gaza Strip has been devastated. After 23 days of massive bombings and of the bloodthirsty attack by land, there are more than 1,300 Palestinians dead, 75% of whom are civilians, among them, some 250 children. The wounded exceed 7,000 and the hospitals lack the resources to attend to them, amidst the bombs, and because of the inhumane blockade that Israel and Egypt are maintaining in the accesses to the Gaza Strip. The "humanitarian truces" of a few hours that the Zionists agree to, when they feel like it, are a disgusting provocation, after dropping thousands of tons of bombs on the most densely-populated territory of the planet, where 1.8 million people are crammed together in a territory of 350 square kilometers (60 times smaller than the Province of Tucumán).

Not happy with that, they are bombing schools, hospitals and mosques. July 29 was the bloodiest day; they killed more than a hundred people and bombed a UN school that functions as a shelter and was protecting (at the time of the bombing) 3,200 people. They also finished destroying the only electricity generating plant that was already functioning at 20% of its capacity, because of previous bombings. On the side of the invader there are 56 soldiers who died in action and 3 civilians. It is not a "war," it is a slaughter, a cowardly invasion by one of the most powerful armies in the world against irregular militias and the defenseless civilian population.

Netanyahu’s Zionist government, pressured in addition by the Zionist ultra-right-wing that Foreign Affairs Minister Avigdor Lieberman heads, has whipped up, as much as possible, anti-Arab hatred and Israeli nationalism among the Jewish population, using the crime against the three youths kidnapped and murdered on the West Bank, which it accused Hamas of, although that organization denied it. This anti-Arab campaign, amplified by the mass communications media, is now continuing with all its force, and it was reinforced with the false ideas that they are under a "rain of missiles" from Hamas or that Hamas is using the "terror tunnels" to enter and attack Israeli territory.

This campaign to encourage hatred between Arabs and Jews has borne fruit. The population is massively supporting the military offensive against the Gaza Strip, and Netanyahu’s popularity is going through one of its best times, despite the bloody slaughters and war crimes that Israel is clearly committing against the Palestinians.

However, even under this strongly reactionary climate, new contradictions are emerging for the government. Netanyahu was betting on a quick military offensive that would hit Hamas, considerably limiting its defensive capability (primitive rockets and tunnels to Israel). But with the passing of days, and because of a failure of these objectives up to now, he is being increasingly influenced by the Zionist ultra-right-wing that is pressing for an intensification of the military campaign, to overthrow Hamas directly and again occupy the Gaza Strip, as it was up to 2005. In this way, it is becoming more difficult every day for the Prime Minister to get a more or less quick and favorable ending to the military offensive, and the possibility is opening up that the offensive will be extended in time, stirring up with that the specter of a possible failure, as in Lebanon in 2006.

These contradictions are being expressed even in the very relationship with his unconditional ally the US, with whose representative J. Kerry he has been having disagreements as regards the conditions for a ceasefire and rejecting the proposals, one after another, despite the fact that they all involve the unconditional surrender of the Palestinians, who, at most, would get to reopen the crossings controlled by Egypt.

The bloody offensive has strengthened Hamas

Another one of the contradictions that Netanyahu has opened up, is that he has strengthened the popularity of Hamas and the Islamic Jihad as the only tools of defense of the besieged population. After the change of government in Egypt in June 2013, Hamas lost its allies from the Muslim Brotherhood. The government of the coup-leader Al Sisi closed the Rafah crossings, taking the social situation in the Gaza Strip to the limit. This had pushed the Islamist organization in April of this year to sign the agreement on a unity government with Abbas’ PLO, that, in turn, needed it to conceal its policy of open collaboration with Israel and imperialism. It was an agreement that handed over the government to the PLO, since there was no member of Hamas in the PLO, as a way of finding a solution to the critical situation it was going through. But the Israeli offensive, for the time being, is strengthening Hamas, although at a very high price.

Take the streets to stop the slaughter

Despite the savage crimes that Israel is committing, neither the UN nor any government has taken concrete measures that will affect Israel’s interests and will force it to stop. The governments of Brazil, Chile, Peru and Ecuador are those that went furthest, by withdrawing their ambassadors, which does not go beyond diplomatic and media measures.

But popular repudiation internationally continues to increase. The mobilizations are continuing, and they have a massive character in the Arab countries. In Europe, the particular case of France stands out, where they continue being held, despite the repressive prohibition by Hollande’s government.

The workers’ and people’s outrage must fill the streets throughout the world to stop the war-mongering State of Israel.

Long live the Palestinian resistance. Stop the bombings, Zionist troops out of the Gaza Strip. Immediate lifting of the blockade. For the full right of the Palestinians to their national self-determination, that can only be fully won in a workers’ and socialist Palestine, in all its historic territory, where Arabs and Jews will be able to live in peace.

The "Corpo" and the Government "K" together?

The Israeli massacre of the Palestinian people, along with the agreement on paying the vulture funds peso for peso, looks like it has managed to make political positions coincide between the two big adversaries of national politics. At the Mercosur Summit, held on July 29 in Caracas, President Cristina Fernández confirmed the position that the Argentinian government has held since the aggression began on July 8: There is a "war" between Israel and Hamas, and both must respect the integrity of civilians and agree to an immediate ceasefire. Cristina did not even know the number of victims that there were, and her Chancellor Timerman tried to help her with very imprecise figures. An embarrassing situation, to end up supporting the truce proposals of the UN, that are useful to Israel, since they do not deal with a single one of the Palestinian demands.

For its part, the newspaper Clarín, through its international columnist Marcelo Cantelmi, editorialized that this situationarises "because the tough guys of both sides refuse to dismantle the architecture that is making this conflict possible. That trap would be taken apart through a shared solution for the Palestinian historical crisis through the establishment of two states. Both the Hamas hawks, masters of power in the Gaza Strip, and their incidental partners on the other side, Israeli political and religious fundamentalism, agree on closing that road" (July 26).

Although much more experienced and serious than the President, Cantelmi does not fundamentally differ from the official position, a vision of "two devils" that makes things easy for Netanyahu’s Zionist government (and its Washington allies), by taking its false and cynical arguments that it is "defending" itself from Hamas.