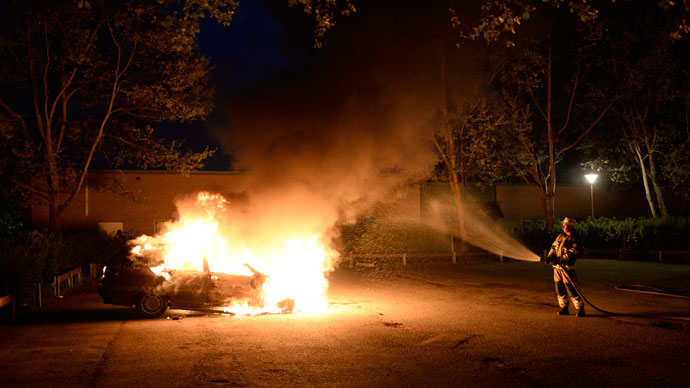 The news that arrives from Sweden is usually associated with the presentation of the Nobel Prize or the “quality” of life of its population, in a country frequently presented by right wingers as an example of civility. But, for four days, the poor districts of Stockholm, the capital of this Nordic country, have been a scene of a riot by young people, mostly immigrants or children of immigrants, that reminds one of the acts that took place some years ago in Paris and other places in France. In the suburb of Husby (on the outskirts of Stockholm) is the center of a riot by young people who, with the burning of cars, attacks on public places, and confrontations with the police and firefighters, are showing their discontent. On the fourth day, the confrontations began to spread to other districts (like Kista, Rinkeby, Jakobsberg or Norsborg).

The flame that ignited the fire was the murder of a 69 year old man in Husby by the police. The disturbance by the young plebeian immigrants is the response to the permanent harassment and repression by the police and an expression of the living conditions in the poorest districts. In Husby, 85% of the young people are immigrants or children of foreigners, 20% do not work or study, and, compared with Swedish young people, where the unemployment figures are around 6%, for the immigrants, unemployment reaches 15%. As one social organization of the area expresses it, “Unemployment, the poor schools, and structural racism underlie the reasons for what is happening right now.” [1]

The statements of the Swedish Prime Minister Fredrik Reinfeldt, declining all responsibility and calling on the population of those districts to combat the disturbances, awakened protest from different groups of society. The leader of the Moderate Party (that forms part of the European Popular Party [2], beside the PP that governs Spain, or Angela Merkel’s German CDU) is attempting to remove all responsibility, when the disturbances are the expression of the lack of health care, education, work and of the ever-worsening living conditions in these outlying areas of the city. At the same time, he gives free rein so that the police, accused of being racist and repressive by the young people of these districts, will act to restore “order.” For their part, the Swedish far-right, of the Swedish Democrats, has used the situation to request the state of emergency and the curfew in the area, and to accuse the immigrants of being responsible for the situation. In the style of the European far right, like the French National Front, Golden Dawn in Greece, or the growing UKIP of Great Britain, they make the immigrants responsible for the aftermath of the economic crisis, the growth of social inequality, and unemployment, seeking to divide the workers and the poor into the native-born and the foreigners, while they conceal the fact that the crisis was produced by the imperialist bourgeoisie.

The disturbances by the young immigrants are a reaction to the conditions that they experience every day. Millions have to emigrate from their own countries, escaping from the hyper-exploitation to which they are subjected by the imperialist firms (as was seen recently with the massacre in Bangladesh) or from poverty and war. In the European countries, they have been holding the worst jobs, subjected to higher rates of exploitation, with worse wages than the native-born workers. With the economic crisis, they are the first to lose their jobs, to be discriminated against, and to lack any social benefit. Xenophobia and racism are used by the bourgeoisie to divert the hatred of the exploited towards the immigrant workers and to attempt to divide the ranks of the workers between “native-born” and “immigrants” and create a reactionary national unity.

The first response to this must come from the workers and their organizations, demanding equal rights, the “legalization” of all the immigrants and the cessation of police repression. A fundamental solution that will guarantee equality, the struggle against racism and xenophobia, can only arrive if the working class takes these demands into its own hands in the context of confronting the control of the imperialist bourgeoisie, by setting out a revolutionary solution.