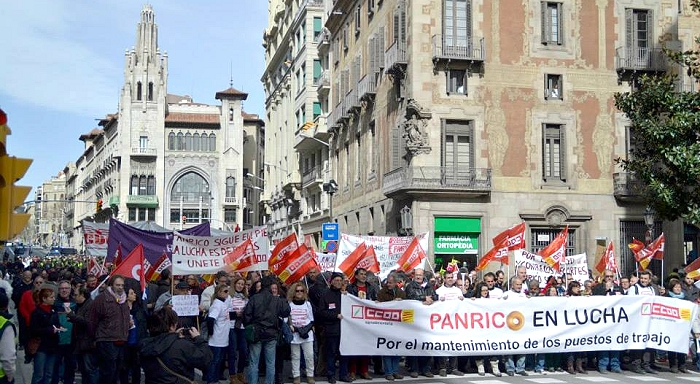 Spanish State: “Panrico and Coca-Cola, the struggle is one”

Since the government and the business owners launched the Labor Reform, thousands of companies have been administering brutal attacks on workers, including steep salary reductions, loss of workers’ gains, thousands of laid-off workers, and the closing of some companies. These attacks are also carried out in big businesses, some of which are emblematic, like Panrico and Coca-Cola. However, the business owners are being met with important struggles of resistance. In the case of Coca-Cola, the workers have been on strike indefinitely since the beginning of February in protest against the closing of four plants in the Spanish State. The company presented and ERE (Redundancy Dismissal Procedure) that would allow them to put 1,200 workers in the street, even after the company has received 900 million Euros in benefits. Along with the indefinite strike, the Coca-Cola workers are calling for a boycott of the brand, which has resulted in a drop in sales. In Madrid, the workers have organized massive demonstrations as well as gatherings in front of the United States Embassy, and they have participated in a number of activities put on by other workers in struggle with the slogan “socialize and collectivize the struggles.” Recently, along with the Panrico workers, they have participated in the action that launched the marches for 22M, marches organized by tens of social, union, and political collectives that will arrive in Madrid from different parts of the country. Five Months of Indefinite Strike at Panrico The PANRICO strike in Cataluña has been one of the toughest strikes throughout all of Spain, expressing a new workers’ resistance, and becoming a symbol of struggle and resistance throughout the country. The company announced 2,000 layoffs and 30-40% cut. In order to implant fear, they decided not to pay the workers for the month of September and announced list of possible accreditors. In light of this, the workers responded with a slogan that has already become historical: ¡0 despidos, 0 recortes!(zero layoffs, zero reductions!) They decided to confront the company’s plan by calling for an indefinite strike and declaring that everything would be decided on in the worker’s assembly. From the start, they began to organize a strike fund that they began to bring by companies, markets, and university faculties. They also supported other workers’ struggles, like Alupu, and other popular struggles, like the Anti-eviction Platform. The idea of solidarity and mutual support was quickly understood by tens of workers that were going through their first big experience of struggle. Not soon after, the union betrayal made itself apparent when the Union Bargaining Unit (representing all of UGT and 3 unions from CCOO) accepted the lay-off of 745 workers in the Spanish State and 15% salary reduction. However, the workers in Cataluña were ready to fight to the end, and a new stage of struggle has begun on every front. For weeks they blocked the distribution of products that were brought from other factories. At the same time they took the struggle outside of their workplace, creating solidarity amongst workers and spreading the word about the conflict, giving talks, holding solidarity drives, and organizing demonstrations stating their demands or participating in demonstrations against the PP’s (Popular Party) New Abortion Law that criminalizes abortion. They also demonstrated their international solidarity. More than 30 workers were present at an Act in front of the Argentine Consulate in Cataluña in support of Las Heras oil workers, and they have been sending video messages of solidarity to the Liliana or Kromberg struggles in Argentina. For the Panrico workers, the slogan “La clase obrera es una y sin fronteras”(the working class is one, and it does not have borders) is not just meant to be shouted out, but it’s meant to be put into practice.

Along with this great experience of struggle, a PANRICO support group has developed, which has played a key role in supporting the workers. It’s a committee made up of different neighborhood associations, social movements, and political and union organizations, which has created a broader struggle and has acted as another supportive tool in the PANRICO struggle. The comrades of Clase contra Clase and Pan and Rosas are proud to have participated in this heroic struggle from its first days. A Conflict that Can and Deserves to be Victorious Up to now CCOO (Panrico’s Union) has not lifted a finger to strengthen the strike fund, carry out actions in solidarity with other workers from Vallés or the food sector, or work towards creating connections with other factory struggles that are part of the CCOO union. Despite this, the Panrico workers are standing strong with their slogan of “zero, zero.” March 20 is the Panrico trial against ERE in the High National Courts. On that day the workers from Panrico will travel almost 800 kilometers to Madrid to be present and are calling out to all of the organizations of solidarity to join them. The Coca-Cola workers have already pledged their support with the slogan “Panrico y Coca cola, la lucha es una sola” (Panrico and Coca-Cola, one struggle). The Panrico struggle can triumph and transform into a point of coordination for the rest of the struggles already taking place in Catalunya and in the rest of the Spanish State. We put all of our effort in this perspective.