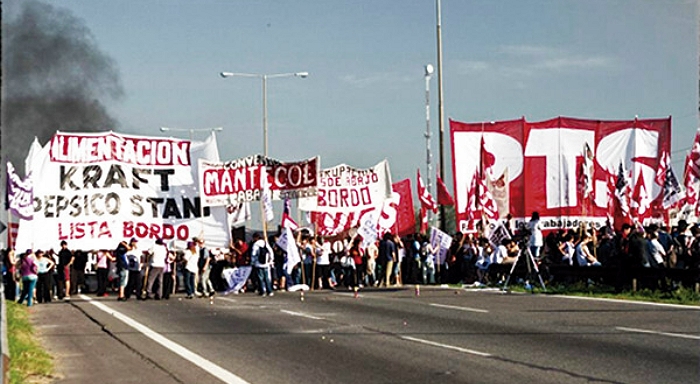 The FIT’s (Left and Workers’ Front) excellent election results throughout the entire country, which will surely be repeated or surpassed in the second round of elections in October, raise many challenges. It expands the scale of preparatory work that is required to lay the foundation for building a revolutionary workers’ party. In addition to the primary campaigns and the upcoming congressional campaigns in October, the PTS militant activities combine struggles in factories and unions, the youth workers and students’ struggles, as well as the struggles that take place in the ideological field and revolutionary internationalism.

The vanguard recognizes the patient work in the worker’s movement, especially in the strategic centers that has been carried out by the PTS. That’s why we developed and expanded work in the north of Buenos Aires in a variety of factories that work with foods, graphics, auto parts (SMATA and UOM), meat packing, and other guilds. Along with independent rank and file workers, we build class-conscious currents that are shop stewards in important companies such as Kraft, Pepsico, Lear, Donnelley, Coca-Cola, Printpack, Molarsa, etc. We also have a presence in the key service unions such as the subway, trains, and airlines. Nationally we are involved in political work with the sugar cane and citrus workers in the northern provinces (Jujuy and Tucumán), the mechanics in Córdoba, the youth workers in Rosario, and the Ceramics workers in Zanon. We’re part of teachers’ unions that have beaten the bureaucracy (ATEN, SUTEBA) and we lead the opposition list in Buenos Aires (FOETRA). These are just some examples of the struggle to take back the unions and to unite the contracted workers with the entire working class. In the student movement, we’re fighting at 21 national universities, and we’re present amongst high school and post secondary students in activist, democratic, and combative centers. We’re active in a new student struggle that is united with the working class cause to defeat the reformist and bureaucratic currents that are responsible for pacifying and draining the energy of the student movement. Together with the lawyers from the Center of Professionals for Human Rights (CEPRODH) we take part in the hardest struggles in the most exploited sectors of society, contributing with legal support in struggles against the employers and bureaucratic unions. We are also involved in the trials against human rights violations, the defense of workers and activist victims of political repression, and the accusations against the government for the used of espionage against labor and political groups. With the women’s organization Bread and Roses (Pan y Rosas), we are at the forefront of the struggle in the defense of working women’s rights and for the right to have legal, safe and free abortions.

Furthermore, we are doubling our efforts in the ideological struggle to defend Marxism with the recent release of the magazine "Left Ideas" (Ideas de Izquierda), which is produced along with the support of popular intellectuals that defend the Left and Workers’ Front. The monthly publication is being distributed in every news kiosk and has been very well received. This has been an unprecedented accomplishment for the Marxist left in the last decades. These types of publications have always been dominated by the "progressives" or liberal intellectuals. At the same time, we are continuing with the publication of books from the Institute of Socialist Thought (IPS) and the Center of Studies, Investigations, and Publications "Leon Trotsky" (CEIP) that are making classics of revolutionary socialism accessible for the younger generations. The most recent publications include the "Selected Works of Lenin", and the "struggle against fascism in Germany" (L.T.) as well as, the upcoming release of a new edition of "Latin American writings" (L.T). We have also renewed our website to provide fast and organized access to our ideas and publications.

Just one week after finishing the first stage of the elections, we will be organizing the international tendency, FT (Trotskyist Fraction - Fourth International), yearly conference. The FT has been taking great leaps forward, not only in Latin America, with the development of our organization in Brazil, Chile, Mexico, Bolivia, Uruguay, Venezuela and Costa Rica but also in key countries in Europe with a great Trotskyist tradition such as France, Spain, Germany. We have held discussions around the national tasks of every organization in our tendency. Moreover, with the emergence of the working class in Latin America and after 6 years of the capitalist crisis, we have initiated an important discussion around the proposal to make a call, via a manifesto, for an International Party of the Socialist Revolution, the 4th International.

For us, the electoral battle, which is very important right now, is another task that is part of our overall strategy because “we are not a party as other parties. Our ambition is not only to have more members, more papers, more money in the treasury, more deputies. All that is necessary, but only as a means. Our aim is the full material and spiritual liberation of the toilers and exploited through the socialist revolution. Nobody will prepare it and nobody will guide it but ourselves” (Trotsky, 1938). The challenge of building a party with a socialist revolutionary program lies in the combination of all of these battles. Along with the electoral victory comes the need to strengthen these preparatory tasks in order to intervene with ideological, programmatic, and strategic clarity as well as having enough militant strenght to carry out a revolutionary solution in light of the upcoming crisis that has shown itself in recent struggles.