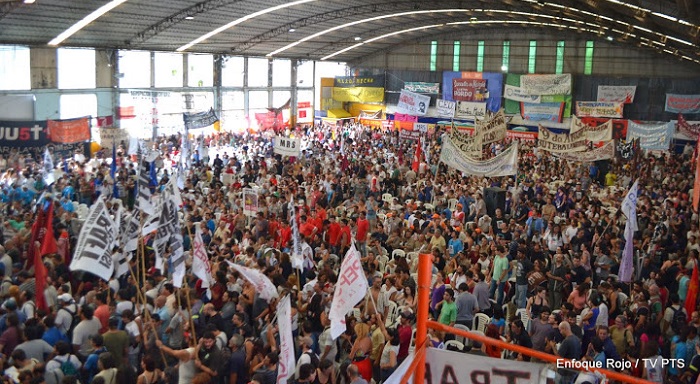 A massive “National Conference of Fighting Unions and workers” demands a general strike and calls for a day of protest, pickets and roadblocks.

All the speakers agreed on their solidarity with the ongoing teachers struggle and on their criticism of all Union leaderships, including Hugo Moyano, and on demanding a national plan of struggle for salary increases, against layoffs, and for the acquittal of the oil workers from Las Heras sentenced to life in prison.

In the opening act, Javier Hermosilla maintained that “We’re going to continue with the pickets and road blocks like we did on November 20 in 2012 when a national strike was called by Moyano (union leader of one of the fragmented CGTs) and Micheli (union leader of one of the fragmented CTAs), in order to raise a voice that is independent of those [Moyano and Micheli’s], actions and to present our own demands. And like we did last February 27 when thousands of workers and left organizations united in the Pan American Highway, General Paz, and Pueyrredon Bridge roadblocks as well as other roadblocks throughout the country to demand the acquittal of Las Heras oil workers, provoking the rage from Sergio Berni and Cristina Fernandez, who attacked our organization (PTS) on a national presidential TV broadcast.”

On his part, Raul Godoy announced that “at the same time that we demand a strike and plan of struggle against the austerity measures and against the criminalization of protests, the PTS and affiliated groups we will continue the struggle to take back the unions for the workers, expelling the union bureaucracy. For these struggles we have a new achievement at our disposal, the members of congress from the Left and Workers’ Front. (FIT).”

The resolutions that are being debated in the sub-committees are:

• Demand from the main unions that they break the truce with the government and coordinate a national strike and a plan of struggle in solidarity with the current workers conflicts, mainly the teachers strike and the struggles against layoffs. For fair wage negotiations in order to achieve a salary that equals the cost of living, to stop all layoffs and for the acquittal of the oil workers from Las Heras.

• Call for a national day of action next April 9th with pickets and roadblocks.

• Practical and effective solidarity with the teachers struggle and other ongoing battles.

• Call for regional gatherings to coordinate these objectives.