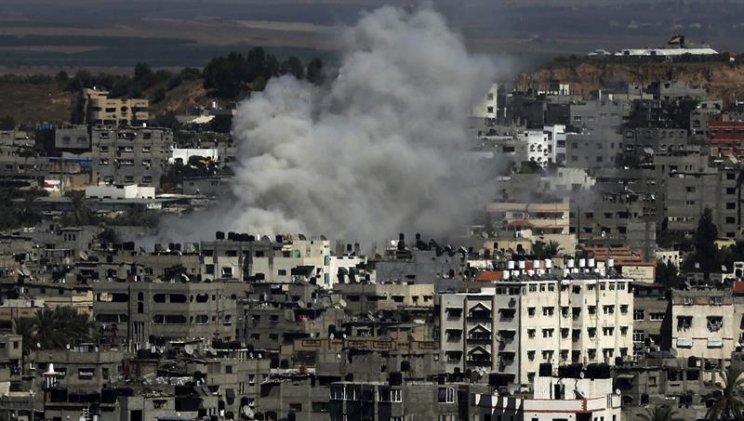 The UN is taking the false position of the "two devils," while Hamas is fiercely resisting the invader

The number of those dead and wounded because of the bombings and the military land offensive of the State of Israel continues to increase significantly. There are no words to describe the atrocities that the Zionist Army is committing; they have bombed hospitals, schools, mosques and even a group of children that were playing on a beach. They have already murdered more than 700 Palestinians; they have wounded another 4,000, and there are tens of thousands of refugees. 70% of the dead are civilians and more than 20%, children. After 16 days of massive bombing and 6 days of an invasion by land, Israel has caused a huge humanitarian crisis, and its Prime Minister, the Zionist Benjamin Netanyahu, has declared, with complete impunity, that the operation "will continue until it achieves all the objectives."

Tough resistance of Hamas and the population of the Gaza Strip

Since the land invasion began, the dead on the Israeli side, that up to then had been scarcely one soldier and one civilian (that were on the border, preparing the invasion), began to increase. At press time for this edition, 32 soldiers had died in street fights inside the Gaza Strip, among them, several officers and non-commissioned officers, and 3 civilians. A high figure if it is compared with the ten casualties that they had during the 2008 invasion, in three weeks.

The launching of rockets at Israel, practically the only weapon (extremely rudimentary and of limited destructive effect) that Hamas has to defend itself with, could not be stopped, even by the land incursion. Nor has Israel achieved another one of its main political objectives, that is, decapitating the Palestinian resistance organizations, like Hamas and the Islamic Jihad. The resistance of the fighters, that are being reinforced, day after day, because of the hatred that the savage Israeli military offensive is provoking among the masses, appears, for the time being, in the cities near the border, to be stopping the invading columns, backed by tanks and armored vehicles (preceded by ferocious bombardments) and headed by elite troops of the Zionist army.

This resistance, in a terrible inequality between the fourth-biggest military power of the planet and an irregular militia that expresses the resistance of the Palestinian people, having been subjected to an ethnic cleansing for 66 years, is making imperialism nervous, imperialism that seeks to put a truce together quickly, to avoid a possible quagmire of the Israeli army and a new defeat, like it had in Lebanon in 2006.

The UN, useful for Israel and imperialism

Despite all the proofs of the massacre that the State of Israel is committing, which proofs can be easily accessed by just looking at the international press, the UN has just stated, speaking through the High Commissioner for Human Rights, Navi Pillay, that "it is possible" that the Israeli attacks are committing war crimes, by violating international agreements, like the Geneva Convention.

Although criticizing the most savage aspects of this bloody Israeli military offensive, the UN is calling on Israel and Hamas equally to stop firing at civilians, echoing the Israeli excuses that they are responding to the missiles Hamas is launching at their territory. Taking the false idea that Israeli aggression is caused by both parties, a kind of "two devils" that would be the ones responsible for these massacres, the UN also pointed to Hamas, for firing missiles at Israel and doing it from "densely populated areas" that put civilians at risk. This would mean that, facing Israel’s aggression, the Palestinians could not defend themselves, given that the Gaza Strip is one of the most densely populated territories on earth.

They are hoping for an unconditional surrender of the Palestinians

In calling the parties to an immediate ceasefire and to the opening of negotiations, the UN is again making itself useful to the interests of the Zionist State and imperialism, in particular, the imperialism of the US, that sent its Secretary of State, John Kerry, "to negotiate" (in reality, to impose) a truce. Kerry was in Cairo, Egypt, where he met with Al Sisi, the leader of the coup d’état/President of that country, that is keeping its consistent proposal for a truce, in which they will stop the hostilities, without conceding any of Hamas’ demands (basically, lifting the criminal Israeli blockade over the Gaza Strip that has been in force since 2007 and the release of Palestinian prisoners, that exceed 7,000). Afterwards, Kerry met separately with the Palestinian President Abbas and with Netanyahu, to continue "taking steps" towards a truce.

Abbas’ PLO declared that the demands of Hamas are those of "all the Palestinians." Their position was being strongly questioned by the population both of the Gaza Strip and of the West Bank, where the mobilizations against Zionist aggression have been sharply repressed by Israel, and in the most recent days, there have already been 3 dead. But, at the same time, the Palestinian President has again shown signs of his collaborationist strategy with the State of Israel, in proposing an "alternative" truce to that of Egypt, that really has no substantive differences. For their part, the governments of the Arab countries, like the Syrian dictator Al Assad, and the Turkish government of the repressive Erdoğan, are not going beyond the threshold of speeches in favor of Palestine either. No one has done anything effective to stop Israel’s military offensive.

One can only rely on the mobilization of the workers and the people throughout the world, to stop the hand of the Zionist murderers and open the road to winning the Palestinians’ demands. For that, the declarations of intellectuals and artists (like the singer Roger Waters, among so many others) are very encouraging, and the dozens of protests that are taking place around the world, some of the biggest of which we are reflecting here.