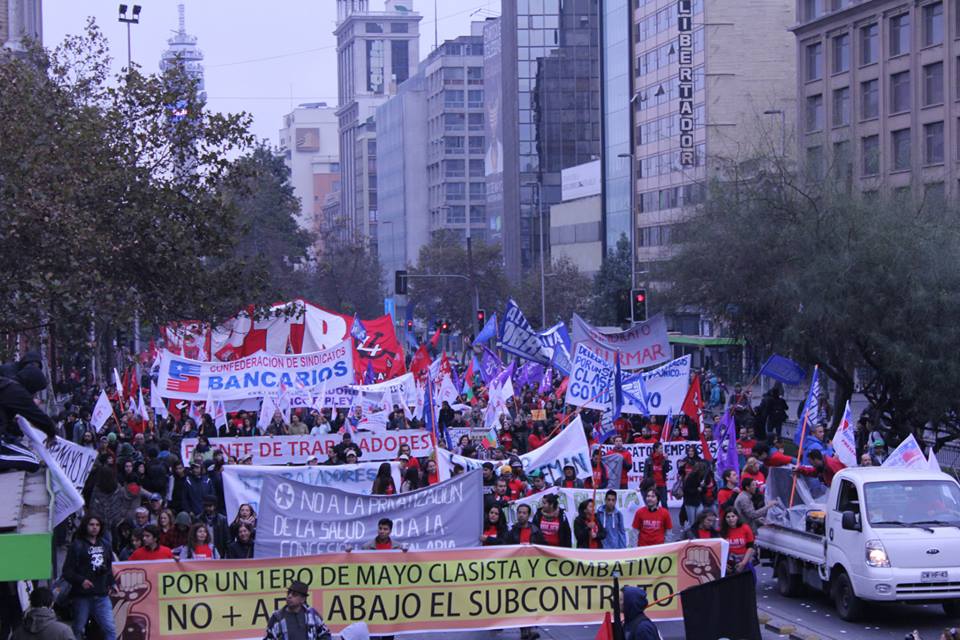 May 1st Across Chile

While the leaders of the CUT reaffirmed their support of Bachelet’s reforms, along with government officials of the New Majority (Nueva Mayoría), more than 350 workers, headed by rank and file combative unionists, marched together denouncing the government’s cosmetic reforms, the deception of the binomial parliament and the big business alliances with the Confederation of Production and Commerce (CPC CUT-agreement).

The mobilization was followed by a truck where workers vocalized their demands. With the banner “NO + AFP. Down with subcontract work. Combative May 1st”, unions and leftist organizations, with whom we (PTR—Partido de Trabajadores Revolucionarios) took part, arrived chanting to the National Library to hear the speeches. At the rally, where many union leaders spoke, the need to promote a combative pole to recuperate unions and the CUT against the "social dialogue" between government and businessmen, for a fighting plan that will actively push every battle of the working class, seeking coordination and anti-bureaucratic unity from grassroots was emphasized.

During the opening speech, Andrés Giordano, Union president of Starbucks (the multinational leader in anti-union practice) raised the need for unity to confront the anti-union attacks and the need of "organizing workers to end labor exploitation."

Among other comrades that marched with us were Luis Messina, general secretary of the Federation of Banking Unions and spokesman movement NO + AFP, Matias Valdes, a metalworker, a member of the group of Workers Alternative Union and Jurmar Union’s treasurer, William Muñoz, President of Komatsu Factory Workers’ Union of Quilicura and a member of Workers Alternative, and Cristian Martinez, member of the Union National Banco Vice.

The bankers also came in big numbers from the Santander Bank’s Union in Santiago, from the Ripley Bank’s union, from the Mortgage BICE’ union and Servinco’s union.

Furthermore, Erick, a postal worker and member of Workers Alternative, described the process of grassroots organization and the strike where 4,000 postal workers mobilized last year, imposing their demands on the union bureaucracy and showing a new perspective

CIC delegates fighting for reinstatement, shared the process of illegal strike in their factory (in its section fighting for better wages). This was an spontaneous and independent strike from the union’s directives. “The company saw the seed of a process of trade union organization delegates from the rank and file, trying to cut down by firing delegates and workers.”

Zikuta, singer, Leon Bloy’s Union delegate and member of Bread and Roses Organization stated, “unite in a single battle the flags of workers with the working women, the most exploited and oppressed by capitalism.” She also welcomed the international workers’ historic strike that went on for 6 months at Panrico’s factory in Spain and the fight for the acquittal of the workers of Las Heras in Argentina.”

Moreover, delegates of Luchetti workers’ union, who are now in collective bargaining, spoke of the struggle looking to promote the Body of Delegates. Also, we had the presence of Complement Union and subcontracted workers of telecommunications (fighting against subcontract work), employees of public universities. In addition, grassroots leaders and workers of FENATS, Hospital Barros Luco, Workers Alternative, Workers Front and Revolutionary Socialism, Worker-Student Secretariat (SECOE) of Philosophy at the University of Chile and History from the University of Santiago (USACH). joined in the conversations. The president of the Student Federation of the University of Chile (DATE), Melissa Sepulveda, gave a warm greeting to all the workers struggles that have occurred up to date and commemorating the first of May.

Also participating were the organization of working women and students, Pan y Rosas, and the organization Combative and Revolutionary. The workers of the “Brigade Hip Hop” that had just released their new album, “Artillery Combat” (Artilleria de Comandante), closed up the rally with some of their songs.

From the PTR (Partido de Trabajadores Revolucionarios) we took part looking to develop a combative and independent workers alternative within the unions from grassroots, completely detached from the state. This May 1st rally has been an important step on the mobilization of unions, delegates and workers seeking to strengthen a combative class perspective with the workers at the center in order to the fight and put an end to Pinochet’s legacy and bring to the end the demands of working class in alliance with the student movement and the oppressed people. We have also organized rallies and have mobilized in the cities of Valparaíso, Arica and Antofagasta. From our young League of Revolutionary Workers Party (PTR), we will seek with all our strength in workplaces and trade unions to fight for a new labor movement, combative and anti-bureaucratic, and struggle for the formation of a revolutionary and internationalist party of the working class.