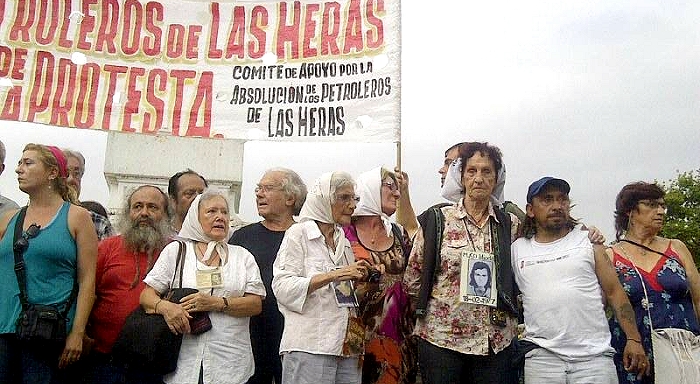 The Nobel Peace Prize Laureate Adolfo Pérez Esquivel and the Mothers of the Plaza de Mayo were among the main speakers at the action.

In solidarity with the Las Heras oil workers, today a mass march took place, that ended in the Plaza de Mayo and showed an enormous spectrum of support for demanding the immediate acquittal of those convicted (in a trial that was a frame-up, based on torture). During the action, a continuation of yesterday’s very large press conference at the Congress, at the request of the Left and Workers’ Front, together with very many human rights organizations and personalities, political parties and union organizations, the annulment of the prison sentences was demanded, and the extremely serious human rights violations committed during the trial were condemned.

In the gallery in the Plaza de Mayo, some of the important speakers were the Nobel Peace Prize Laureate Adolfo Pérez Esquivel and the Mothers of the Plaza de Mayo, Nora Cortiñas, Elia Espen and Mirta Baravalle, as well as Ramón Cortés, one of those given a life sentence, Nicolás del Caño and Néstor Pitrola, national Deputies of the Left and Workers’ Front, the CTA and members of the internal commission of the Donnelley graphics firm, in the context of an action that brought together a very broad spectrum of workers’ organizations, the internal commissions from Kraft and Pepsico, subway workers (with the Delegate Claudio Dellecarbonara), the student centers of Philosophy and Letters and Social Sciences of the University of Buenos Aires, and legislators from the Left and Workers’ Front, like Christian Castillo and Myriam Bregman, among others.

Nicolás del Caño, a national Deputy of the PTS in the Left and Workers’ Front, who was one of speakers of the action convened by the Committee for the Acquittal of the Las Heras Oil Workers, pointed out from the Plaza de Mayo: "The trial in which the comrades were found guilty, was completely a frame-up, with the aim of teaching the workers a lesson and stopping them from getting organized and fighting for their rights. We are facing one of the biggest attacks since the dictatorship here, a trial to suit the oil companies and with the government’s complicity. It is essential to continue promoting a big national campaign, as was shown yesterday in the press conference at the Congress together with a lot of human rights organizations and personalities, political parties and union organizations, and, as we have shown today, by demonstrating massively in the Plaza de Mayo. Today actions in solidarity were also carried out in Paris, Madrid, Barcelona, Mexico, Berlin and Chile."