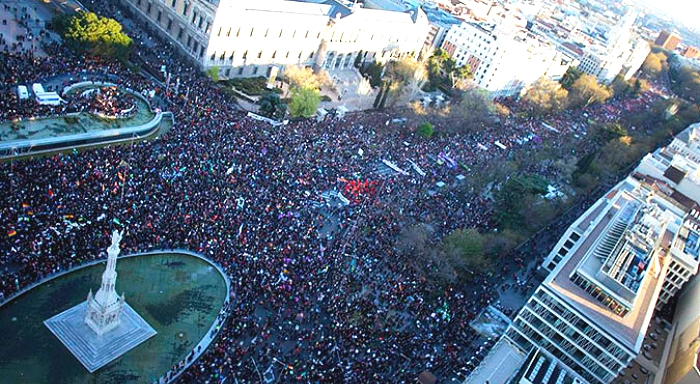 Mass Demonstration in Madrid. To unify the struggles, to the General Strike

March 22: Not one step backwards! Almost a million and a half people completely filled the streets of the center of Madrid in the culmination of the Marches for Dignity that, for weeks, have been going all over highways, towns and cities of the entire state, being strengthened at each step by more female and male comrades.

At the first hour of the morning, the final stages of the eight columns that were going to converge in the afternoon, began. They did it from different localities of the Madrid workers’ belt, like Carabanchel, Getafe, Aravaca or San Fernando. And, beginning at 3 p.m., the route between Atocha and Colón began to fill up. An historic mobilization that, just before finishing its central action, was brutally repressed by the immense police presence deployed by the government, with a toll of 24 arrests and dozens of wounded.

March 22 was about a real social clamor against the serious consequences of the capitalist crisis that have been unloaded against the workers and groups of the poor. The different contingents represented struggles, like the struggle of those affected by mortgage payments, the different surges against the policies of cutbacks in education and public health, those affected by the preferential policies, the unemployed, the landless day laborers, women, young people, immigrants. There were also present different struggles of working men and women that are confronting closures, layoffs, draconian reductions of wages, and loss of what had been achieved: the miners, health service workers, cleaning workers, teachers, workers of the EMT [buses], the subway, the firemen, the gardeners of Zaragoza in struggle...

The lead banner of the demonstration was carried by representatives of some of these struggles. In it were also workers from the two main strikes under way in Spain; that of Coca-Cola Fuenlabrada, with almost two months of struggle against the closure, and that of Panrico Santa Perpetua, with more than five months on strike, in opposition to hundreds of layoffs and a Draconian wage cut.

Panrico and Coca Cola: A workers’ contingent for the coordination of the struggles

The contingent formed by the brave working women and men from Coca-Cola and Panrico was precisely one of the most prominent and colorful. The mobilization, together with the Extremadura Column from Carabanchel Alto up to Colón, was the high point of three intense days of unity between these two great strikes, that began on March 20 in the demonstration in front of the National High Court, where the trial against Panrico’s Dismissal Program, that the company finally managed to postpone, was going to take place. And it continued with the visit to the Fuenlabrada picket line, the Meeting between the working women comrades of the two firms and the joint participation in the final stretches of the march from Extremadura. This contingent kept agitating the entire demonstration in favor of the unification of the struggles, the general strike, and other slogans of unity between both struggles.

We men and women militants of Clase contra Clase marched together with these struggles, that have been the advance party of some new winds in the workers’ movement, that are questioning in deeds the "lesser evil" policy encouraged by the bureaucratic leaderships of the CCOO [Comisiones Obreras] and UGT, by standing firm against the layoffs and cutbacks and showing that struggle is the only way to stop retreating. For that reason, we demonstrated with the women and men comrades from Coca-Cola and Panrico in the march, and also with the workers from Zaragoza Parks and Gardens, that are getting ready to go on strike for an indefinite period, beginning with the month of April, in the alternative column organized by the CGT, CoBas, Solidaridad Obrera, and the Intersindical of Aragón.

This cry of indignation totally calls into question the same old story that many union bureaucrats and leaders of the reformist left are proposing, that "the people are not about to get mobilized." The "people" indeed want to, and the working men and women, in particular, ... also! Hard struggles, like those we saw marching in Madrid, are showing this, struggles that in many cases are still fighting, despite the sticks that the bureaucratic leaderships of the CCOO and UGT are putting in the wheel for them. And in these days it has been crystal clear where each one is. While we hundreds of thousands were getting ready to flood Madrid on March 22, Toxo and Méndez were meeting with Rajoy, Fátima Báñez and the CEOE [Spanish Confederation of Business Organizations] to seek ways to the "social accord."

The massive March 22 mobilizations mark the road opposed to the passivity that these leaders who sold out, want to impose. A road that is the only one that can really twist the arm of the PP government, its agenda of cutbacks and a management that is making "its own August," thanks to the labor reform. We must try to transform the social outrage into a powerful mobilization that will help the working class be able to retake its own methods of fighting and put itself at the head of all the popular demands. In fact, this was the conclusion that was expressed in many of the chants of the various columns, like the one from Coca-Cola and Panrico, or that of the miners: "Like this, like this, not one step backwards, to unify the struggles, to the General Strike," and was set out by a large part of the speeches made on Sunday morning, at the General Assembly of the marches.

The Marches of Dignity were organized, based on four central slogans: "No to paying the debt," "Public services for everyone," "A right to housing for all people," and "A decent job and a basic income." Undoubtedly, a necessary program, but insufficient to solve the capitalist crisis that is being unloaded onto our backs. The absence of a demand on the union leaderships and a denunciation of their policy of social peace was, without a doubt, one of the biggest limits.

In that context, it is necessary to emphasize the attempts of the IU leadership to capitalize on this big protest, so that the IU would do well electorally in the May elections. Very possibly, many women and men of those who mobilized on March 22 have illusions in Izquierda Unida; however, this formation has been showing that its strategic plan does not offer any fundamental solution to the big problems of the majorities of the workers and people; rather, it is intent on "managing" capitalism, as they are doing from the "government of the left," next to the PSOE in Andalucía. In fact, many men and women comrades that traveled hundreds of kilometers for March 22 in Madrid, were doing so in opposition to the cutbacks approved by the PSOE-IU in the government of Andalucía, or, like the gardeners of Zaragoza, that are confronting a company that has the backing of the city council in the hands of the PSOE and supported by the IU.

However, the massive character and fighting spirit of the demonstration and, above all, the presence of the main workers’ struggles that have taken place since the crisis started, made the people’s most heartfelt demands and especially the outcry for a new General Strike, forcefully present in the mobilization.

The groups that organized the column of alternative trade-unionism, in their call, proposed demonstrating separately, to raise a class perspective and fight for imposing a general strike. From Clase contra Clase, we share and greet the content of this class appeal. However, the decision to march separately and finish almost at the beginning of the route of the main demonstration seemed to us to be a mistake. In the first place, because it took importance away from the presence and the demand for a general strike on a day as important as this one. And, secondly, and still more important, because it did not help March 22 permit moving forward in the coordination of the workers’ struggles, that were going with the marches and those struggles that the union left wing should throw itself into supporting and surrounding with solidarity, over and above what abbreviation their workers belong to, without any sectarianism. A major task, in order to impose, from below, on the bureaucratic leaderships of the CCOO and UGT, the calling of a General Strike.

The government of the PP responds with repression

Rajoy’s government developed an entire campaign to try to limit, to the maximum extent, the effect that this great mobilization could have. In the previous weeks, he had the support of the big communications media, that were scandalously silencing the call, even despite the fact that the predictions were already forecasting that it was going to be a massive mobilization. When it was not possible to conceal further, Ignacio González, President of the Community of Madrid, branded the marches as fascist.

And when these marches were already a fact and had become one of the biggest demonstrations that the capital has experienced, they chose to attack with an operation of 1,700 riot control police, brought from throughout Spain. Around 9 p.m., with the action still underway, they began to charge, with missiles and clubs, at the demonstrators gathered in Colón, leaving a toll of 24 arrested and dozens of wounded. At press time for this article, most of the arrested women and men comrades have been released, with the exception of a male comrade who remained under preventive detention, incredibly accused of "attempted murder." The fight for his release without charges is an unavoidable task of all the social organizations and collectives, of workers and the left.

For hours, they were being used fully, to prevent the demonstration from being able to conclude, and thus, in passing, to give the communications media the photos of disturbances, with which they are trying to hide the fact there were more than a million people who demonstrated yesterday. However, neither repression nor concealment by the media can deny that there is a "before" and an "after" of the March 22 marches.

The Marches have shown the potentiality that unity from below has, which the union leaderships, up to now, have refused to coordinate: the struggles of working men and women, the groups affected by the layoffs, by the loss of rights in public health and social services, the residents of working-class neighborhoods, etc. It is necessary to move forward decisively in the coordination of all the struggles, and to set out the need to retake the road of the General Strike against the government, the Troika and the European Union of capital. To put an end to the corrupt Regime of ’78 and begin a revolutionary constituent process, that will allow resolving the big democratic demands, against unemployment, job insecurity, poverty... in favor of the social majorities and over the interests of the handful of capitalists that, up to now, have been running our lives. A process that will serve to impose a government of the workers and the people, based on our own institutions of self-organization, and forever to put an end to the governments of IBEX35 and the CEOE, that, under the mask of the PP, the PSOE or CiU, are making our lives impossible.