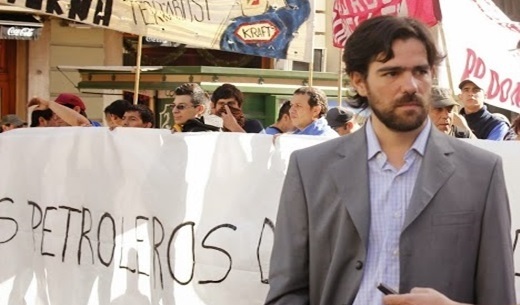 Today, national MP for the Left and Workers’ Front (FIT) Nicolás del Caño rejected the increase in salary that will see national MPs earning 50,000 pesos a month from February 1. “It’s a provocation,” he said. “Politicians earn ten times as much as any worker, while inflation has already reduced real wages by 20 per cent over the last three months, and the government and bosses are trying to put a ceiling on collective bargaining in order to consolidate that loss. Such excessive wages for government officials and MPs are meant to make sure they keep on ruling and passing laws against the interests of the workers, in favour of the bosses, bankers and landowners.”

Del Caño announced that he will keep 8,500 pesos a month, and that the rest of his salary will be used to support workers’ and popular struggles. So far this month, 20,000 pesos have been donated by FIT MPs to the workers of Lavalle city, Mendoza, who won the fight for permanent contracts for more than 300 temporary workers, and to the workers at the electronics firm Liliana SRL in Rosario, who are fighting for an increase in their minimum wage. Del Caño has also contributed money from his parliamentary salary to pay for the travel costs of oil workers from Las Heras, Santa Cruz, who are campaigning for the release of colleagues who were sentenced to life imprisonment in a flawed trial for taking part in a fight against the payroll tax in 2006. Full details of these donations are published on the PTS webpage www.pts.org.ar. In addition, Del Caño will present a bill in parliament proposing that all government officials earn the same salary as a teacher, and is seeking the support of several different workers’ organization in order to pass the bill.

“Next on the agenda for workers,” said Del Caño, “will be to increase their wages to make up for inflation, and to fight against the rising level of exploitation in the workplace and lay-offs. Our seats in parliament and our salaries will be at the service of these struggles.”