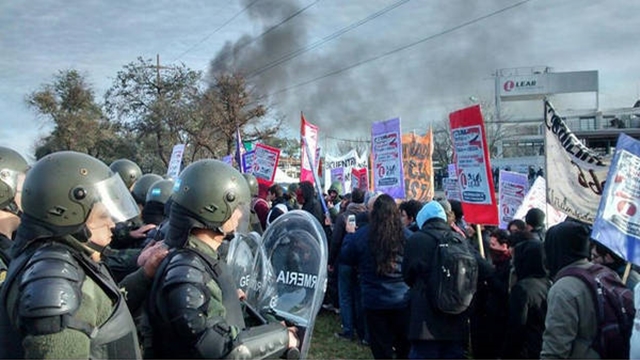 Lear: Mobilization from the Panamericana highway to downtown Buenos Aires

Thursday September 18th, 2014 | 5 pm - After the 3rd roadblock at the Panamericana Highway, the workers participated in a rally along with supporting organizations. Actions were carried out throughout the country, while a delegation of workers took part in the eighth anniversary of the disappearance of Julio Lopez. The national actions against the Lear’s layoffs began in the morning with three roadblocks at the Panamericana highway. Actions and mobilizations also took place in Cordoba, Rosario, Mendoza, and Bahia Blanca.

Lear workers have been fighting for the last four months for the reinstatement of fired workers and against the actions of the SMATA Union thugs who attacked the workers’ internal committee delegates inside the factory. The new measurements have taken place after the scandal of the national Gendarmerie and the infiltration of a civil agent (Galeano).

During the morning at the Panamericana, deputies, journalist and workers were repressed. La Izquierda Diario (The Left Newspaper http://izquierdadiario.com/) interviewed one of Lear’s fired workers, Damian Gonzalez, who stated what happened: “The gendarmerie threatened journalists, telling them not to record what was happening, and used pepper spray against our camarada Christian Castillo (FIT - Left and the Workers’ Front deputy for Buenos Aires province). They beat up students with their sticks. The truth face of the repressive state has been revealed at the service of multinationals. The government plays their game, but we are here with all the support of teachers, students, Donnelley’s workers, Kraft, Stani, and many other sectors.”

Also, deputy Christian Castillo (PTS-FIT) declared, “the Gendarmerie, as usual, came to repress. They used pepper spray in my face without warning. They like to repress the workers and defend the interests of the of the company. We will keep fighting, we will keep mobilizing until we achieve the reinstallment of all the workers".

Finally, another fired Lear worker, named Alfredo expressed “We are here in the ninth struggle action, demanding to get our jobs back and demanding that the SMATA, our union, step forward in support of the workers’ struggle. There are still 60 families in the street. The Union delegates do not want to recognize that internal committee delegates were democratically voted in by 70% of the workers. We will go on with this struggle until the last of our fired co-workers are reinstated. We want Lear to know that it must prepare itself because this struggle will keep going and the actions against the Ministry of labor will increase.”