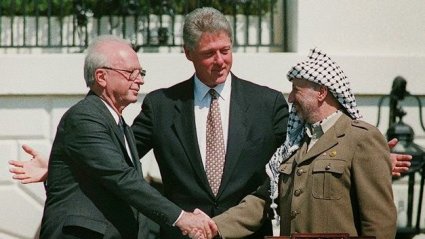 Israeli offensive against the Gaza Strip

The conflict between Israelis and Palestinians seems to be doomed to be eternal. The conclusion is deduced from the experience of numerous failed attempts at negotiation, during the 66 years of existence of the State of Israel. About that, the journalist Marcelo Cantelmi indicated that the 1993 Oslo peace accords, that were promoting the two-state solution, were the most daring attempt at negotiation, that started "real hopes," which failed to prosper because in 1996, the Labor Party, headed by Shimon Peres, lost the elections, faced with Benjamin Netanyahu’s Likud. "If Peres had remained in office, the Oslo accords would have continued" (Clarín, July 12). Cantelmi’s statement is incorrect. Shortly before those elections, Peres ordered Operation Grapes of Wrath, a 16 day offensive against Hezbollah with hundreds of bombardments of Lebanon, unmasking Peres’ alleged pacifist vocation. In reality, the Oslo peace accords were a fraud, to the detriment of the interests of the Palestinian people, that were only intended to reduce the pressure of the turbulent winds of the First Intifada (1987-1993), a profound rebellion of the masses that cracked the Zionist occupation.

Signed by Bill Clinton, Yitzhak Rabin and Yasser Arafat, the Oslo accords created the current Palestinian National Authority (PNA), in those days a government with jurisdiction over a third of the Palestinian territories that were under Israeli military administration. Under the ruse of progressively extending the government of the PNA, the agreement kept the lack of definition of the main Palestinian demands: the right of return, the establishment of the capital city in East Jerusalem, and the borders of the State of Israel, an historic capitulation, as the late and famous Palestinian intellectual, Edward Said, denounced well.

Obviously, that lack of definition was not accidental. From the extreme right up to the Zionist left, they never accepted the right of return of the 8 million Palestinians that are living in the diaspora, predominantly in refugee camps of other Arab countries, after their expulsion in May 1948, during the Nakba. The flux of that multitude would threaten the demographic equilibrium on which the Zionist state is founded, supported on a Jewish majority that establishes national oppression over the Palestinian minority, beginning with an army of occupation. In the same way, the demand for the capital city was making an abstraction of the resolution of the former Prime Minister Menachem Begin, who in 1980 designated Jerusalem the "sole and undivided capital of the Jewish state," extending the colonies over the Arab eastern zone, colonies that had already begun to gain momentum after the 1967 Six Day War, through the army occupation. The State of Israel is the only state in the world that does not possess fixed borders, since, given its colonialist nature, it is permanently in expansion.

The murder of Rabin in 1995, at the hands of a settler, swept away the empty verbiage of those accords, ushering in the Israeli regime’s political drift towards the right, decimating the old liberal pacifist movements, tied to the Zionist left.

Thus, with the support of the US and the UN, these accords provided a cover for corrupting Fatah and the PLO, as agents of the occupation (co-opted by the financial contributions of the US) and extending the Jewish colonization of Palestine to 82% of its historic territory. Without territorial unity, Gaza and the West Bank are now two completely broken up pieces of land. Since 2007, the State of Israel has blockaded Gaza by air, sea and land, with the collaboration of the government of Egypt, that conveniently controls the Rafah crossing, while more than 60% of the population depends on humanitarian assistance. Occupied by 500,000 Jewish settlers armed to the teeth, on half of its area, the West Bank is crossed by the 700 kilometer long Apartheid Wall, plus hundreds of Israeli army checkpoints that are choking the small Palestinian villages in an archipelago of unconnected bantustans.

Historically, the State of Israel never intended to consider the demands of the Palestinian people. In his book, The Ethnic Cleansing of Palestine, the Israeli historian Ilan Pappé describes how already in 1935 (13 years before the Nakba), the Zionist strategist David Ben Gurion maintained that only a small minority of Palestinians could remain to assure the development of a Jewish state, and the rest had to be "transferred" to other Arab countries. Obviously, the existence of that racist and colonialist state is the real obstacle that conspires against the legitimate aspirations for peace between Arabs and Jews and the full right of the Palestinian people to national self-determination in all their historic territory.