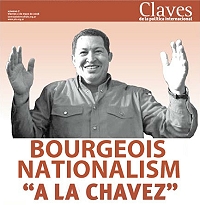 In La Verdad Obrera 219 and 220 (you can read those issues in www.pts.org.ar in Spanish) we gave an account of the Cuban Revolution. In this last installment we want to discuss the self-interested vision promoted by castrismo and chavismo that seeks to identify the Cuban Revolution with the Bolivarian movement.

Chavismo presents the so-called "Bolivarian revolution" as the new model of "twenty-first century socialism." It permits Hugo Chávez to display himself as the ideological heir of the Cuban Revolution. The Cuban leadership helps him in his attempt to present himself before the Latin American masses as an anti-imperialist leader. In turn, he flirts ideologically with bourgeois nationalism, by promoting it as the ideological mentor of an alleged "twenty-first century socialism."

Some groups that claim to belong to the Marxist left, like the Argentinean MST or the El Militante current get excited at Chávez’s declarations of "Patria, socialismo o muerte" and the nationalizations and claim they are a step forward on the road of socialist revolution. In this way they erase the qualitative differences between a worker-peasant revolution that swept away the bases of imperialist and capitalist domination and gave rise to a deformed workers’ state, and a nationalist movement with bourgeois content that promotes a "passive revolution," political reform from above, and maintains the bases of the state and capitalist domination of Venezuela, through class conciliation, that has not been able to confront imperialism consistently.

A state of what class?

Revolutionary socialism has always explained to the working class that, to establish a correct policy against the state, it had to define clearly what class was retaining power, its social character and content. Social revolutions destroy the capitalist state by passing power from one class to another, replacing the old bourgeois legal, political and military machinery with a new state order. In Cuba the revolution of workers and peasants defeated not only Batista, but also the old state dominated by the bourgeoisie and landlords, which served the interests of imperialism. In Venezuela the old state machinery continues to stand. In Venezuela chavismo expressed a change in the regime of parties from the Punto Fijo agreement, which was demolished after the Caracazo [uprising] of 1989, but it did not mean a change in the state order. The state institutions, the armed forces, the courts and the bureaucratic machinery, were reformed, but they continue to fulfill the role of being the guarantors of capitalist domination.

El brazo armado [The armed wing of the state]

In Cuba the revolution meant the end of the bourgeois state and of social domination by capitalists and landowners. This was possible in the first place because the armed forces of the old regime were defeated by the popular insurrection and the forces of the Rebel Army, leaving the bourgeois state without its fundamental pillar and without its repressive means of support. This fact explains the dynamic that the Cuban revolutionary process assumed. The state’s repressive forces were replaced by workers’ and peasants’ militias, the armed people, who guaranteed the defense and deepening of the revolution. The formation of the revolutionary armed forces and the regimentation of the militias in pursuit of a professional armed force created with time a special detachment of the bureaucracy that until now has been the main economic force of Cuba, intimately tied to capitalist businesses since the latter half of the nineties [1].

In Venezuela, the armed forces continue to play the role of defenders of bourgeois order and are one of the fundamental pillars on which chavismo is supported. For that it appeals to an organic law that dates from 1995 (when the old political system was in force with the officials that repressed the Caracazo [uprising]). According to this law, that the Bolivarian Constitution also contains, its prerogatives are national defense, contributing to public order, and to the defense of the Constitution [2]. Even the national armed forces have a special wing, which is the National Guard, dedicated to maintaining internal order. Chavismo is in its origin an expression of military nationalism, from a plebeian origin that opposed the repression of the 1989 uprising. This base of soldiers, NCO’s, and middle-level officers was the leadership, together with the Venezuelan masses, of the defeat of the big coup attempt of April, 2002. The discipline and authority of the military hierarchies, the officer caste and its privileges were repaired, with sectors related to Chávez standing out in the leadership. The national armed forces are the guarantee in the final instance of a strong power, that, while appealing to the masses with its populist rhetoric and anti-US sentiment, keeps soldiers as a special body of repression to confront popular rebellion if necessary. The so-called Bolivarian militias are only a body of civilian origin and in no way a popular militia called to replace the permanent army.

Ownership of the means of production

Social revolutions mean a change in the order of property. For this reason, the Cuban Revolution ended landowning property through the agrarian reform that distributed the land to the peasants, and later through collectivization and nationalization of the ownership of land. Industry and the fundamental services were expropriated and nationalized, together with banking, and the state monopoly over foreign trade was established. The expropriation of landowners and capitalists and planning of economic resources created the economic basis of a workers’ state. But they did it in a bureaucratic manner, without breaking the dependency of the Cuban economy on sugar production and subordinating it to unequal exchange with the USSR and the old Eastern European "socialist" states, denying the workers and peasants any opinion and decision on political economy and planning [3].

In Venezuela chavismo is the guarantor of capitalist property. The Bolivarian Constitution in Article 115 guarantees the right to property, although it rejects monopoly, which has no practical value when it comes to permitting joint deals with transnational corporations like Shell and Repsol. But the same constitutional article has great practical value for respecting capitalist property and interests. For example, the Minister of Finances Rodrigo Cabezas indicated about the recent nationalizations, that they will be made "respecting the constitutional and legal framework that among other things prohibits carrying through expropriations" [4]. The nationalizations caused enthusiasm in the population and in the leftist media, but in reality they represent buying the firms from privatizing groups, as recognized by the Chairman of the Finances Commission of the Asamblea Nacional, who declared that the nationalizations are not "a measure of expropriation; the strategic firms will be purchased."

Chávez has maintained that "We have not rejected private property . . . it must only be increasingly a function of social welfare." [5] This is why businessmen’s groups like Empresarios por Venezuela (Empreven), the Cï¿½mara Venezolana de la Construcciï¿½n (CVC) and the Confederación Nacional de Agricultores y Ganaderos (Confagan), among so many other businessmen’s associations, launched the creation of the Confederación de Empresarios "Socialistas" de Venezuela. As our comrades of the JIR commented, "It is a strange revolution where those who constantly exploit, continue normally with their transactions; what is more, they have prospered in their profits." [6]

The situation of workers and the people

In Cuba the revolution involved a qualitative change in the living conditions of the masses of workers and peasants. Thanks to the changes brought about in the nature of property, the revolution put an end to the scourge of hunger, illiteracy, child labor, and unemployment. To get an idea of the social scope of the revolution, it should suffice to say that it permitted a reduction in infant mortality to 7% (2003 data), raising life expectancy to 77 years and eradicating illiteracy. In its time, it gave a big boost to public health; if in 1958 there was 1 doctor for every 1,076 inhabitants, today there is 1 doctor for every 159 inhabitants, who get personalized attention, and similarly, 1 dentist for every 1,066 inhabitants. Unemployment is currently 1.9%.

In Bolivarian Venezuela, the situation of the masses is kept in the framework of poverty and degradation caused by capitalism. According to official statistics, poverty has been reduced from 50.4% in 1999 to 33.9% at present, but keeping the enormous gap and social inequality between rich and poor. CEPAL tends to agree with government data: "For the year 1999, poverty was at 49.4%, but six years later, it was 37.1%." [7] The informal economy occupies about 50% of the active labor force of the country. While "the distribution of income in 2002 in wages and salaries reached 33%, falling by 2005 to 25%, capitalists’ profits rose from 38% in 2002 to 49% in 2005." [8]

Socialist revolution or a caricature of revolution

Che Guevara set out as the conclusion of the Cuban Revolution, "On the other hand, the indigenous bourgeoisies have lost all their ability to oppose imperialism “if they ever had it” and only form its tail. There are no more changes to be made; either socialist revolution or a caricature of revolution," [9]Some time ago, the castrista leadership announced the abandonment of this struggle and now puts its prestige in chavismo to strengthen Chávez as a leadership that represents the interests of class conciliation between the impoverished and hardworking masses and the national bourgeoisie. This is consistent with the policy of preventing revolution and its extension, as it did with Nicaragua and El Salvador in the 1980s.

Chávez is not the representative of the Venezuelan people and of the peasant masses of Latin America. His objective is not the workers’ and peasants’ government, the development of workers’ and popular self-organization, nor the struggle to overthrow capitalism as a means of struggle against imperialism, but preventing new revolutions that, as in Cuba, could topple the power of the bourgeoisie. His international efforts are based on presenting as friends and allies the servile governments of the national bourgeoisies that present themselves as progressives, as is the case with Lula or Kirchner and those who seek to curb revolutionary processes led by the workers’ and peasants’ masses, like Evo Morales in Bolivia or Rafael Correa of Ecuador. "Twenty-first century socialism" is the discourse that masks this aim.