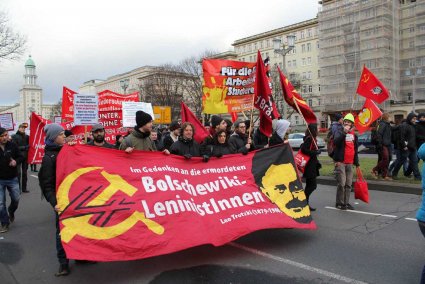 In October, 2013, the Left and Workers’ Front (FIT) got 1,200,000 votes in the legislative elections in Argentina. Last Saturday, January 11, Christian Castillo, a national leader of the Partido de los Trabajadores Socialistas (PTS) and a Deputy of the FIT in the Province of Buenos Aires, went to a hall filled with an audience of more than a hundred people, composed of university students, high school students, workers and militants of the Left, where he told about this experience.

One hundred years after Karl Liebknecht’s "No" to the war credits and the bankruptcy of the German Social Democracy, the question of revolutionary parliamentary activity and the current challenges in Argentina and Europe was discussed in the talk. For that, together with Castillo, Martin Suchanek (GAM/NAO), Sascha Stanicic (SAV), and Stefan Schneider (RIO) participated.

Christian Castillo’s visit to Berlin is a part of an internationalist tour through Europe, to make the experience of the FIT better known. Just in the context of a capitalist crisis, it is necessary that the workers, young people and the Trotskyist Left be able to learn from this experience. He has already given talks in London, and he brought support to the striking workers of a food factory in Catalonia, Panrico. In the following days, he will visit Greece, France and Spain, where he will give several talks.

Castillo, a militant of the PTS, a sister organization of RIO, began his speech by paying homage to the great revolutionary Rosa Luxemburg, who fell fighting for the socialist revolution. He showed that the historic election of the FIT is based on a long experience of a break that the working class made with the "national and popular" government of the Kirchners. Now there is an initial crisis of the political regime, exacerbated by stronger economic tensions. "Groups of the workers are breaking with their historical leadership, Peronism, and they are going to the left," Castillo noted. That was seen in the national strike of November 20, 2012, that was led by the workers, many times even against their own bureaucratic leaderships. At the same time, the tenacious work, in the first place, of the PTS, in the most recent decade in the workers’ movement, with which they recovered committees at enterprises in big industries, is noteworthy.

That is now reflected in the result of the FIT, that set out a clearly socialist program. Central demands, like non-payment of the foreign debt and expropriation without compensations of the mines, the banks and big industry, and starting up under the management, administration and control of workers and of the service users, are part of an anti-imperialist and anti-capitalist profile, for which the Trotskyist Left is renowned. "We are participating in the Parliament," says Castillo, "not because we have illusions in parliamentary activity, but to advance in the struggle for a workers’ state based on soviets."

In his speech, Martin Suchanek (GAM/NAO) spoke about the European and German situation, where the revolutionaries have to struggle against big reformist machines. In Greece, the election result of the left-reformist party Syriza strengthened these variants of mediation. Likewise, in Germany, the main task is the building of a workers’ revolutionary party, that will be independent of the apparatuses of the unions and of the party Die Linke. For that, parliamentary work is a subordinate but serviceable job. To reach that point, "the forces of the Left have to overcome their weakness and begin a process of regroupment," Suchanek concluded.

Sascha Stanicic (SAV) contributed several experiences of his international tendency, the Committee for a Workers’ International (CWI) to the debate. It has only been some weeks since Kshama Sawant of Socialist Alternative, a sister organization of the SAV in the US, took office as a City Council member in Seattle. "An openly socialist program is not the only explanation for such an election victory, but it is its precondition," Stanicic explained. He also told about the positions of his Irish comrades that are in the European Parliament and that are at the service of the social movements. Concerning Germany, he said that only a good base of militants makes it possible to work on a city council. In that sense, the demand of the FIT that a Deputy earn the same amount as an average worker has its topicality here.

Stefan Schneider (RIO) emphasized the significance of the FIT beyond the borders of Argentina. The election result shows that it is possible to reach the masses with a clearly revolutionary and socialist program. This is quite the opposite of the broad anti-capitalist or openly reformist projects of the Left, as they have emerged in the most recent years in Europe. In Germany itself, there are many people that defend Die Linke as the only possible variant. "In many struggles we can observe a questioning of the dominant system, as in the struggle of the refugees against state racism, in the strikes of the street vendors or in Neupack by a rejection of the bureaucratic leadership of the struggle," Schneider stressed. For that reason, it is necessary to build an alternative force, that will take the banner of self-organization of those in struggle and an anti-bureaucratic perspective for the unity of workers’ ranks.

After the speeches, there was a long debate in which the question of building a revolutionary anti-capitalist party in Germany, particularly in relation to Die Linke, and the significance of the votes for the FIT, for revolutionaries in Germany, was discussed in a polemical fashion. A big dispute in that context was whether it was possible to win the masses with an openly socialist and revolutionary program. Everyone agreed that the need exists for united front actions, that will not dilute the program. Jan Richter, part of the enterprise committee of H&M on the Friedrichstraße, told about the big support that several revolutionary groups in Berlin gave the picket lines during the strike of the street vendors, that lasted for seven months.

In his final speech, that took place when it was already very late, Castillo again emphasized work in the workplaces and the universities. While a large part of the Left abandoned the centrality of the working class after the fall of the Berlin Wall, with that method, the PTS sought to get organized strongly in the industrial working class, For that reason, one of the main tasks of the PTS today consists in going for the recovery of the unions from the hands of the bureaucrats. Another task is opening the discussion on the construction of a great revolutionary party with the forces inside the FIT. "The task of the revolutionaries is to train the social force that can bury capitalism."

On Sunday, he visited the traditional march in commemoration of Rosa Luxemburg and Karl Liebknecht, that went from the Frankfurter Tor to the commemorative site of the socialists. Together with other Trotskyist organizations, RIO was part of a "Bloc in Memory of the Fallen Bolshevik-Leninsts," that fought against the Stalinist bureaucracy in the Soviet Union and against the reformist leaderships of the workers in the capitalist countries.