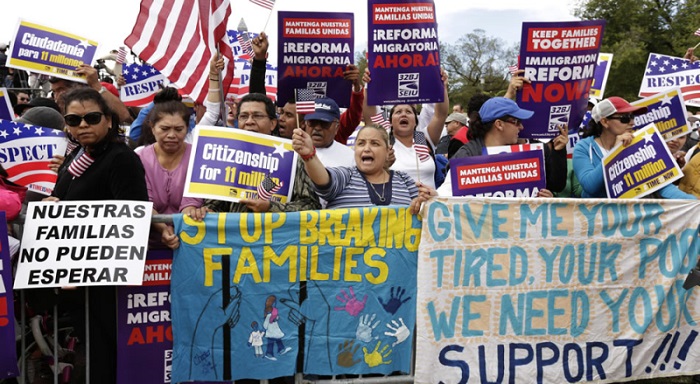 Demonstrations in 40 cities across the U.S. took place this past April 5th against the massive deportations of immigrants. These demonstrations take place within the context of isolated but ongoing struggles throughout the country. Hunger strikes and actions of civil disobedience against deportations have becoming increasingly frequent. Although still lacking in coordination and with a firm stance against the government and the Democratic party, the frustration felt by undocumented immigrants has the potential to breathe life into other sectors of the workers’ movement in the United States.

The importance of immigrants to the American working class

The composition of the working class in the U.S. has undergone an enormous change in recent decades due to the influx of immigrants. In 1970, only 5.2% of workers were immigrants. By 1990, this figure had risen to 8.8%, and in 2011, it reach 16.2%. This translates to 25 million people in the workforce, half of whom are Latinos.i ii Although it is difficult to determine with certainly, it is estimated that 12 million are undocumented workers, equal to 5% of the total workforce in the country.iii

Where are they concentrated

While a small percentate of highly specialized workers exists in sectors like computer programming, nursing, engineering and medicine, the large majority of immigrants are employed in low-paying jobs.iv Because of to their undocumented status, many of them maintain a low profile to avoid calling attention to their status. The cynicism and the collusion between the state and the capitalists is astounding. The boss asks the worker for a social security number and documents which certify his legal status such as a birth certificate or drivers license. The employer knows or at least suspects that these papers may be false. Later on, the state does the dirty work and immigration authorities carry out raids in the workplaces with the aim of terrorizing immigrant workers. The cost to the employer? None, as the worker is quickly replaced. The consequeces for the worker, of course, are disastrous. The raids reinforce the dominance of capital over the working class as the fear of being deported forces workers to give up their universal rights and accept exploitive and abusive conditions. In certain sectors, the immigrant workforce is highly concentrated, such as construction, service, fast-food, and above all, agriculture. According to writer and activist Michael Yates “almost all the men and women who plant, cultivate, and pick our crops are immigrants.” The workday is exhaustingly long, child labor is a common practice, and even cases of slave labor have been documented. The life expectance of a farm worker today in California is 49 years, the same as it was in 1960. In general terms, workers born outside of the U.S. earn a salary equal to 75% of native born workers.v

The trade unions have not had a consistent policy of inclusion toward immigrants. In 2003, the first significant immigrant march took place, organized by the union HERE, and supprted by the AFL-CIO federation and other unions. The most important demonstration of the movement’s strength, however, took place on May 1, 2006 when 1 million immigrants throughout the country took to the streets and put their demands on the political stage.

The empty promises of Obama and the trap presented by Congress

Since then, the Democrats have succeeded in co-opting the movement, including immigration reform as a slogan in its electoral campaigns, and particularly through countless nonprofit aid organizations, including workers centers and advocacy groups. Although Obama promised to deliver on immigration reform during both presidential campaigns, the only policy he has implemented thus far has been a deferrment of deportation for two years (Deferred Action for Childhood Arrivals) for a select sector of young immigrants. The biggest accomplishment of Obama, on the other hand, has been the deportation of almost 2 million people – more than any other president in U.S. history. This policy is strongly supported by the prison industry, which pockets $5 million daily thanks to the detention of immigrants.vi After the 2012 elections, the Democrats, taking note of the importance of the Latino vote, approved an immigration reform bill in the Senate which would grant legal status to the majority of immigrants currently in the U.S. without documentation. In order to achieve citizenship, however, one would have to undergo a legal process which could take up to 13 years, and many would be left behind. On the other side, the bill would mean an increased militarization of the border and other mechanisms of control. The bill was never approved in the House of Representatives, which has a Republican majority. The Republicans, for their part, have proposed a series of individual “piecemeal” laws for certain immigrant groups while excluding the possiblity of obtaining citizenship, and always tied to the strengthening of border controls.

Where are they taking me?

The deportations have had an appaling destructive power. An immigrant man or woman is removed from his home or workplace and taken to a detention center before being tossed across the border, without papers, without money, and away from his family, friends and the life he has built over the years. It is not surprising then that, in a defensive shift, the principal struggle of immigrants today is to halt the deportations, and that the fight for citizenship has been moved to the background. But this change has also meant that pressure has shifted from Congress to the White House. The excuse of a divided Congress where a Republican majority blocks reform is no longer valid. Immigrants today demand directly of President Obama that he take matters into his own hands and end the policy of deportations through an executive order. The disappointment in the President is evident in the number of Latinos expressing support for Obama in the past year falling from 71% to 48%.vii

More or less progressive, but all bourgeois

The Republicans, with an anti-immigrant discourse and programme, seek to placate their nationalist and reactionary base. Nevertheless, they are conscious of the need for action by the government, however timid, in response to this enormous social problem. The Democrats, knew that posing as progressives for years had no consequence, with a bill that never passed the lower house. Of course, in the case of granting citizenship to millions of Latinos, their votes would guarantee Democratic victories for years to come. The problem is that the Democratic Party, just like the Republican Party, represents the interests of the capitalist class. And for capitalists, there is nothing preferable to a situation in which the working class is weak. Keeping millions of workers undocumented and forced to work under inhumane conditions for little pay has been the primary immigration policy in the U.S.

I am tired of this game

But the fuses are breaking. Immigrants are becoming disenchanted with the Democrats and gaining courage. The spread of direct actions, hunger strikes, and demonstrations shows the great potential for mobilization, although still with a defensive posture. However, the co-optation of the movement by aid organizations prevents the posibility of an escalation similar to that of 2006. The principal task today is to overcome the diplomatic path put forward by organizations allied with the Democratic Party, such as CHIRLA, CARECEN, Hermandad Mexicana, NDLON, etc. None of these groups seeks to truly mobilize the immigrant community. There is not even a call on their webpages to march on May 1. Although the movement has had its experience with the Democrats, it still must break definitively and create an organization independent of the bourgeois parties. A true moblization of the rank-and-file is necessary in the workplaces and in the streets to demonstrate the power of immigrant workers. The alliance that must be forged is with the rest of the working class to fight together for their common interests. On one side, it is neccessary that the immigrant working class recongize its ally in the native-born working class and abandon the tactic of pressuring Congress or the White House under the leadership of “progressive” Democrats. On the other side, the working class organized in the unions, left parties, and other working class organizations must fight hand-in-hand to win the democratic rights of immigrant workers. Any alliance with the bourgeois parties will ultimately lead to cooptation and defeat.