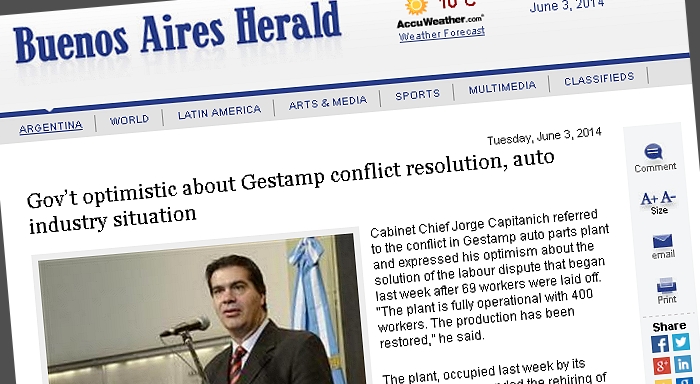 Cabinet Chief Jorge Capitanich referred to the conflict in Gestamp auto parts plant and expressed his optimism about the solution of the labour dispute that began last week after 69 workers were laid off. “The plant is fully operational with 400 workers. The production has been restored,” he said.

The plant, occupied last week by its workers who demanded the rehiring of the laid off workers, re-opened today after the first mandatory conciliation hearing took place. The Cabinet Chief said the supply of the automobile companies that depend on Gestamp’s production was restored yesterday.

The Kirchnerite official also alluded to the general situation of the auto industry, reiterating that not all companies face the same challenges. “Some [companies] that did not raise their prices now have an increase in demand, while others raised their prices and put pressure on the government,” he said, “they cannot put the workers over the edge all the time in order to put pressure on the government”.

He stressed the importance of the sector for the country’s economy, and said “significant breakthroughs” have been achieved in bilateral negotiations with Brazil to “strenghten auto parts production levels, create financing conditions and boost demand in both domestic markets”

“Cooperation is important not only for economic progress but also for workers, equity and income distribution,” he added.

In his daily press brief, Capitanich pointed out that the government is “making all efforts” to encourage salary negotiations between public transportation companies and UTA Transport Union to solve the on-going sector’s wage dispute.

“We are doing our best to reach a solution,” the Cabinet Chief said.