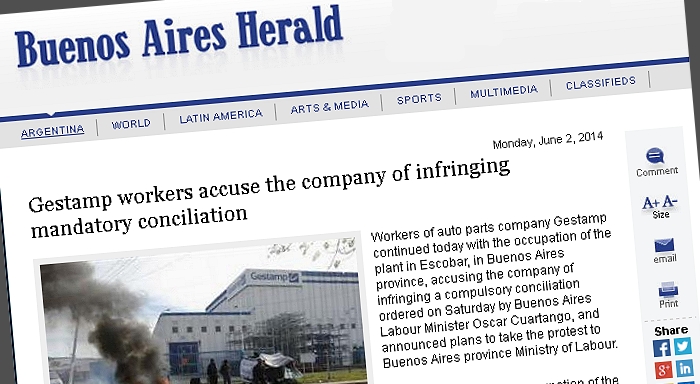 Workers of auto parts company Gestamp continued today with the occupation of the plant in Escobar, in Buenos Aires province, accusing the company of infringing a compulsory conciliation ordered on Saturday by Buenos Aires Labour Minister Oscar Cuartango, and announced plans to take the protest to Buenos Aires province Ministry of Labour.

The workers began the occupation of the plant last week, demanding the rehiring of 67 employees fired in April. Today, the occupation continued, with workers accusing the company of not allowing them to go back to work, infringing mandatory conciliation.

The conciliation declared by Daniel Scioli’s government commands the company to rehire the laid off workers, urges the end of the occupation and calls for a 15-day negotiation between the parties.

Buenos Aires Province Production, Science and Technology Minister Cristian Breitenstein explained in an interview with Del Plata Radio that the mandatory conciliation urges the parties “to negotiate, not to reach an agreement” but expressed optimism over a solution to the dispute. “[The situation] will be solved this week,” he predicted.