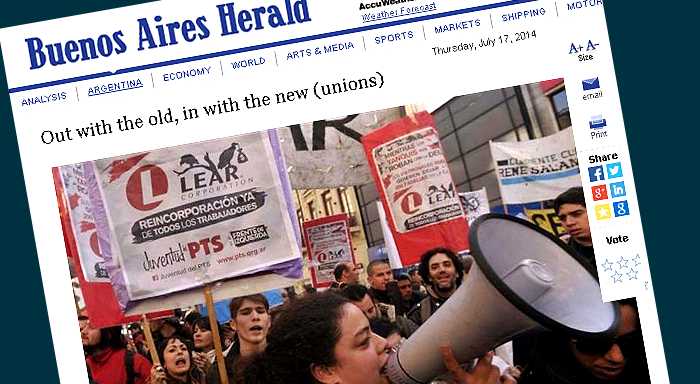 By Mariano Parada López For The Herald

Around 650 workers at the car-parts company Lear are pressuring their bosses to respond to the dismissal of 100 of their colleagues. They have organized several demonstrations in the past two weeks, as well as a picket that was eventually countered by security forces last Tuesday. So far the firm has not allowed the shop stewards to enter the factory.

A similar situation is playing out for the workers of Gestamp, which also manufactures car parts. They have demanded that the company rehire 70 dismissed workers. Meanwhile, employees of the printing firm RR Donnelley joined Lear workers at a recent rally to protest the layoff of 123 of their colleagues.

Early in the year, SUTEBA – a Buenos Aires province teachers’ union – staged a lengthy strike against what they regarded as an insufficient pay hike (i.e. below the official inflation rate) offered by Governor Daniel Scioli’s administration. Roberto Baradel, the head of the teachers’ union, denied that left-leaning parties had been behind the conflict, despite some observers having considered the strike to have been propelled by left-wing activists within SUTEBA.

These labour conflicts follow a common trend: new union organizations emerge, rejecting old leadership, before rallying for support from nervy businessmen. The result has been the renaissance of leftist trade unionism, which has also absorbed so-called “independent” workers.

“The working-class is waking up,” said Silvio Fanti, a Lear worker and member of the local union representing the 650 employees. While he admits there are some union members in Lear who are part of left-wing parties, he said he himself is an “independent.” Fanti has worked at the car-part manufacturer for 15 years and became a regional shop steward in 2011, when his group won the internal elections against the pro-government SMATA auto workers union led by Ricardo Pignanelli.

Fanti accuses SMATA officials of turning their backs on Lear workers in their demands for better working conditions. “Trade unions don’t want independent members, and even less so left-wing activists,” Fanti told the Herald. “We work with a lot of different people, but it doesn’t mean we’re all left-wing,” he added. “There are local committees which are claiming their independence from the trade unions. The working-class is waking up and demanding fairer working conditions,” he said.

Fanti says he’s certain there will be more “democratic” trade unions as a consequence of the emergence of these regional committees, and accused SMATA of sharing the same interests as the company.

Roberto Amador from Gestamp largely agreed: “The union wouldn’t listen to us. They told us in April that nothing was going to happen but then the firm fired 23 people, all of whom were opposed to the union.” He said the unions claim they’re powerless, suggesting that anyone with a critical opinion of them is considered a “leftist.” A PTS party activist, Amador told the Herald that a committee member was threatened: “One of the shop stewards received a letter which said he would be killed.”

Local delegates have been operating within Gestamp since 2007. The committee was comprised of pro-Pignanelli activists until 2012, when three “independent” shop stewards were voted in. According to Amador, the election came as a result of a new generation of workers: “There were lots of young people hired by Gestamp who didn’t trust the ruling bloc. It’s not a case of the leftist parties agitating for change, but because of our own colleagues within many SMATA factories who are expressing their anger.”

The relationship between the union and the local committee is quite different at RR Donnelley. “The union has declared that it is opposed (to the dismissals). Union support is really important for us,” stressed Jorge Medina, a shop steward.

The eight members of the local committee at Donnelley, who form the “Brown List,” are against the ruling “Green List” linked to the Buenos Aires Province Graphics Union, still led by Raimundo Ongaro, a long-term union leader and the founder of the CGT de los Argentinos in the 60s. Despite their political differences, Medina has not criticized Ongaro: “We’re permanently in touch with the union. They’ve publicly denounced the dismissals and called on the entire union to be on the alert.” Both Lear and Donnelly workers recently held a protest in front of the US Chamber of Commerce in Buenos Aires.

If the increasing mistrust of unions is one of the pillars of local committees, the country’s current economic situation is another.

Romina del Plá is the delegate of the La Matanza section of SUTEBA and the niece of Claudio del Plá, a Workers Party politician in Salta province. She shared her views on why some long-standing union leaders risk losing support: “Leaders who follow sitting governments and give up on (traditional labour) demands are likely to lose workers’ support. Workers feel fed up with fake nationalism. Peronism has been a serious burden for workers for the last 40 years, which has resulted in the emergence of a new generation of workers who see leftist parties as an exit strategy.”

From the business perspective

Business leaders, meanwhile, are sensing the emergence of these new trade unions, though they see them as a temporary phenomenon.

“It’s drawn our attention to the year’s economic problems,” said Juan Cantarella, General Manager of car-parts industry group AFAC. “There are shared problems among (workers of) the entire industry, and they’re usually employment problems, like dismissals and the desire to work fewer hours.”

Unless Gestamp and Lear conflicts appear on the front pages of newspapers any time soon, AFAC doesn’t see the phenomenon turning into anything bigger. “They (the conflicts) are concentrated in northern Greater Buenos Aires, where many leftist groups are headed. They don’t have the sufficient structure to expand across the entire industry. It is true that their task is made easier when the economic situation worsens,” Cantarella suggested, admitting the relationship between SMATA and his industry is “good.”

AFAC, like workers in the industry, have stated that the conflict has escalated on occassions: “They can’t take over a plant and threaten those workers who want to work as usual. There have been acts of sabotage.”

The Herald was able to determine that some in the Argentine Industrial Union (UIA) see the conflict as a consequence of economic stagnation and the high rate of inflation. The UIA also does not expect the new organizations to expand, but is “aware” of their existence. “These are times of uncertainty,” a senior UIA source told the Herald.