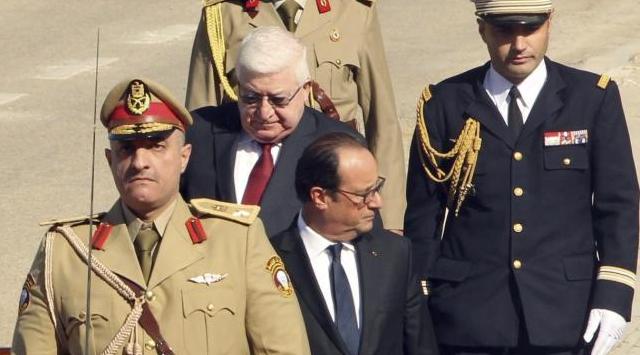 Hollande and one war per year

If there is an area where the French President seems effective, it is in the unprecedented level, in recent history, of France’s military intervention.

Mali was first, then the Central African Republic, and now France has involved itself in Iraq, together with the United States, and it is getting ready from now on for a possible intervention in Libya. An entire record of military interventions in the recent history of the fifth-strongest imperialist power internationally. Although without a result for the moment, Hollande is seeking to reverse the bad economic situation and his enormous domestic weakness, by appearing as a tough guy in foreign policy.

Paris’ leadership in this affair has been increasing. Last Friday, Hollande was the first Head of State to meet with the new Iraqi government. Meanwhile, from now on French soldiers are already partners in the planning of the aerial operations in Iraq at the headquarters of the US general staff of Centcom [US Central Command] in Tampa (Florida).

Why is France in the foreground, if at a military level the United States would not need the French Air Force in order to do its job? The answer is a mutual political benefit to both sides of the Atlantic. From the US side, Obama is interested in showing that the US is not the only one that is behind the Jihadists, but that a huge international coalition is backing it.

In the absence of military involvement, a vast coalition of countries is seeking to give political support to this dangerous new US intervention. This is the function of the Summit jointly presided over by Iraq and France, carried out today in the French capital, together with the five permanent members of the UN Security Council and some 39 countries from the West and Middle East, that are participating in some manner in the coalition that the US is assembling.

From the French side, Paris, for its part, is managing to accept the illusion of appearing, in a not very costly way, in a theater of operations where, for some time, it has not played an important role. Hollande’s trip, the Paris Conference, some bombs dropped well against the Jihadists in the days to come, after the delivery of 12.7 mm machine guns and the delivery of humanitarian aid to the Kurds, everything recorded well by the cameras.

In turn, the Iraqi crisis is one of the few questions that, on a domestic level, wins a consensus among the French political class. Sarkozy’s former Defense Minister and now a member of the centrist party (UDI), Hervé Morin, defends France’s role in this conflict. Recently, former Prime Minister François Fillon and Pierre Lellouche (both from the right-wing party UMP) traveled to Iraq, to support the Christians of the East, a popular cause in public opinion. Even Marine Le Pen’s international advisor, Aymeric Chauprade, approves of the US attacks and French backing.

In the near future, Libya

But the reality is that the real war that interests Paris is in front of the Mediterranean coasts. Some days ago, the French Defense Minister, Jean-Yves Le Drian, asked for intervention directed by France in Libya, saying that Libya was becoming a "center for terrorist groups."

In Libya, French hypocrisy does not lag behind that of the US in Iraq. Three years ago, France and England, with logistic support from the United States, bombed Libya, while assembling a coalition of Islamist militias linked to Al Qaeda and tribal forces, to destroy the Libyan state and assassinate its leader, Colonel Muammar Gaddafi. Now, they are cynically using the chaos they unleashed in Libya as a reason to invade the country again, allegedly to fight against the same Islamist forces that they supported in 2011.

It is for that reason that it would be necessary, once and for all, to eradicate from the face of the earth the primary source of all these disasters: imperialist world domination. Let that action be presented as something humanitarian and as assistance to the Arab revolutions, as was the case in Libya; the only rescue for the refugees pursued and murdered by the Jihadists is now, in Iraq, to stop the chaos, as is the case in Libya; these military interventions worsen the supposed evils that they try to solve, by increasing the number of countries that have been destroyed, as land devastated after the action of the imperialist powers.

The disastrous state in which the countries that have been invaded remain for years is one more sign of the decline of US imperialism, that French imperialism follows in its support beyond its own limited economic means, that cannot guarantee the most minimal stability of anything they touch.