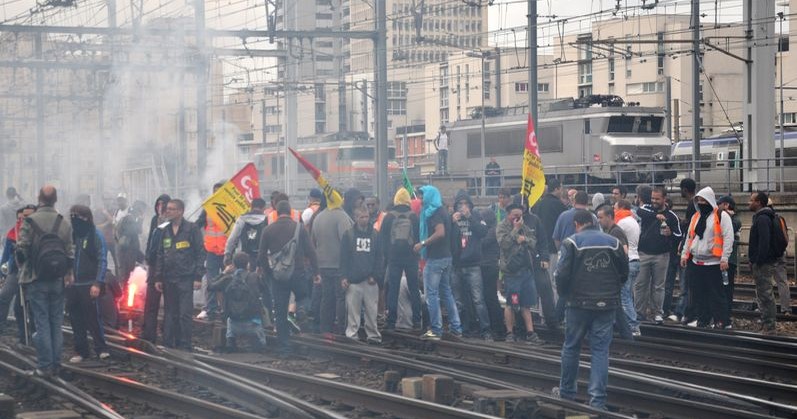 FRANCE: The railway workers’ strike was a warning for Hollande

For several months, the opposition to Hollande’s government was on the right, with the reactionary mobilizations against marriage equality and the election results of the extreme right, which stood out in the French political landscape. The railway workers’ strike last June, that lasted for 15 days, represented the toughest workers’ opposition that the Socialist Party [PS] had to confront since it took power in 2012. In addition to presenting an encouraging rupture in a political panorama shifted to the right, this strike displayed the first fissures of the method of "social dialogue" used by the PS and its "social pact" with the French employers.

Several harsh attacks against the workers have been employed since the PS took office in 2012: the relaxation of laws relating to terms of employment, pensions, reduction of taxes for the employers at the expense of the poorer classes, and the deterioration of public services. The bureaucracies of the different union federations, after "negotiations" with the government and the employers, either openly supported the reforms or said they were opposed, but without organizing the most minimal resistance. Thus, they tied the feet and hands of the workers, without allowing them to engage in self-defense.

The railway reform, that opens the doors in the future to the elimination of certain social conquests of the workers of this sector, the atomization of these workers, when all is said and done, prepares the beginning of the privatization of this public enterprise (SNCF); it should have proceeded like the others… But, this time, the workers resisted. Facing pressure from the rank and file, the CGT bureaucracy, together with the SUD (the railway workers’ unions), called a strike, that, it expected, would only last for a few days. The level of compliance [with the strike] was extremely high. In some places, it reached 90%.

The workers were willing to continue the struggle, which made it difficult for the union bureaucracy to stop the strike. At times, the bureaucracy found itself partially surpassed by the initiatives from the rank and file. The signs of the government’s nervousness were clear, which resulted in a furious anti-striker campaign in the press and in the train stations.

Betrayal by the union

From the beginning, the CGT union bureaucracy had no intention of carrying out a serious struggle against the reform, but rather a token strike of pressure on the parliament. But, facing the willingness of the rank and file to struggle, it was impossible for the bureaucracy to betray openly. In that sense, it opted for letting economic pressure guarantee that, little by little, the workers would find themselves forced to resume working. For that, it impeded every attempt to create a strike fund, and, in order not to be overtaken by the rank and file, it obstructed every initiative of self-organization and convergence among the railway workers of the different stations and groups.

Thus it is that the law was approved by parliament, and, despite the will to struggle, the workers of different stations and cities were returning to work. Faced with this policy, Sud-Rail never presented an alternative to the CGT; on the contrary, it had a completely copycat policy.

A new situation in the workers’ movement?

Despite the defeat of this protest, the railway workers are not showing signs of demoralization. A new crop of young working men and women went out to the fight, converging at times with other groups in struggle (workers facing job uncertainty, postal workers), which almost no one expected.

This strike, without changing the most general tendencies of the general situation in France, could start a new situation in the workers’ movement. The railway workers’ struggle encouraged and strengthened the struggle of other groups. It also opened a breach in the "model of social dialogue" (cooption of the union bureaucracy) that the PS uses to contain the popular resistance to its attacks. The railway workers’ strike created a precedent that undoubtedly both the government and the bourgeoisie are afraid of, facing the next counter-reforms that they will have to employ.