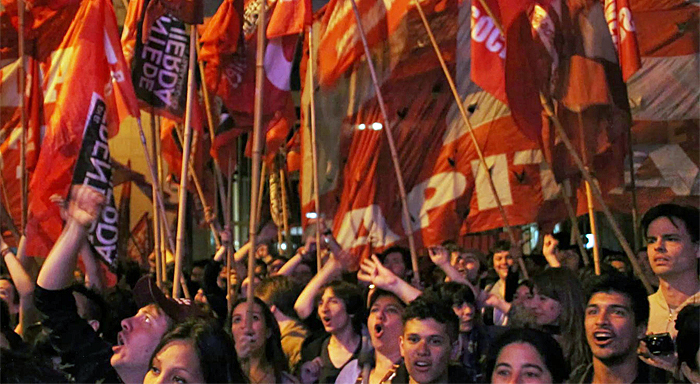 By Christian Castillo, Deputy in the Buenos Aires province Parliament

On October 27 the FIT secured three national Deputies for Mendoza, Salta and the Buenos Aires provinces – and a fourth parliamentary seat, that we are fighting for, against fraud, in Córdoba. We also won provincial Legislators in several districts like Buenos Aires, CABA and Mendoza. We got almost 1,200,000 votes nationally, 300,000 more than in the primary elections, more than 5% of the voters. In Mendoza, in only two months, the votes increased by 90%.

The national media that minimized the vote for the FIT in the primaries and covered our campaign as little as possible (to the point of not inviting our candidates even to the debates) have now had to account for the result obtained by the anti-imperialist, anti-capitalist and socialist left. Several international media passed on reports of our growth.

Not a few "pollsters" and "analysts" put us down in the polls (especially in the Province of Buenos Aires), and, when the results were hardly known, they had to leap to try to interpret the vote for the FIT. Even the Peronist Governors that visited Gioja in San Juan "discussed" what the vote was expressing in Salta, where the list of the PO came in second, with almost 20%, and in Mendoza, the list headed by Nicolás Del Caño (PTS) exceeded 14%, as ámbito Financiero (October 30) commented. In those Provinces, during the campaign, since the surveys could not conceal the growth, they launched the entire media apparatus to question the aspects of the program of the FIT, that, they believed, would "frighten away" the groups of the poor, like abortion or the problem of safety, transforming them into the fundamental theme of the discussion.

In the Province of Buenos Aires, where the election of greatest national significance was, we got 5%, despite the polarization between Massa and the FPV. In the entire conurbation, we surpassed De Narváez, who had the support of Moyano’s backers. We reached the Buenos Aires legislature by scraping together 6% for the 3rd Section, the most populous one, that groups together 19 municipalities, of the east and south of Greater Buenos Aires, like La Matanza and other districts.

The analysts connected to Peronism delude themselves with the notion that the vote for the left will be a passing phase. But a vote with such big results in numerous Provinces, over and above the distinctive features, expresses a national tendency that we could attribute to the combination of different phenomena.

First, the presence of the left among the workers and young people, with an intervention in the movements of struggle (of the workers, for human rights, of women, etc.) that grew throughout the Kirchner cycle. We are a left that does not disappear between one election and the next, but has a permanent presence in the class struggle and national politics. In 2009, the total of the votes for those of us who make up the FIT was about 400,000 votes. By then, we had led some of the most outstanding conflicts of the working class under the rule of the Kirchners (the big struggle at Kraft), something that would be repeated in the struggle of the subcontracted railway workers of Roca, during which Mariano Ferreyra was murdered. In particular, the PTS was winning plant committees and shop stewards’ committees in numerous factories and enterprises, with a lot of influence in the industrial belt of the northern area of Greater Buenos Aires. The electoral unity established in the FIT in 2011 gave greater visibility and impetus to that presence, allowing us to get more than 500,000 votes for the presidential ticket and 660,000 for national Deputies.

There was no "one wall" to the left of Kirchnerism, as they were saying from Carta Abierta, but a class-conscious left that was fighting against the current, independent of the government and other employers’ variants. It is no coincidence that in factories where the militant activity of the Front has a presence, 20%, 30%, and even 40% of the workers voted for us. And we are talking about "big" enterprises. If, in the entire cycle of the Kirchners, comrades of the left were elected as shop stewards or as members of factory committees, what is new is that this political vote for the left, in some cases, repeated since 2011 (there have already been four elections), and, in other cases, for the first time, is accompanied by the active militancy of numerous workers. Dozens of workers from different workplaces help to oversee the elections and also persuaded comrades, friends, neighbors and relatives to vote for the FIT.

The second aspect has to do with the disappointment with the Kirchners’ government. A fringe of those who supported it "on the left," with the illusion of progressive transformations, now voted for the FIT, making us right in our continued delineation with respect to the character of the government and its permanent policy of taking up just causes, in order to bastardize them. This increased in the face of the governing party’s turn to the right, after the primary elections. Here is the experience that it is a chimera to expect transformations "from the left" by a coalition with right-wing groups, like conservative Peronism, that governs provinces and municipalities or the corrupt union bureaucracy.

Third, there is a phenomenon among young people, a big component of the vote for the FIT, both working-class and students. This youth vote has social and political reasons. For many young people that entered the labor market for the first time, or that are studying in post-secondary settings or are even doing some subjects in the university, the future looks frustrating. Work is uncertain, and they are a large part of those who earn less than 5,000 pesos a month. That generation is suffering the disillusionment of the "Kirchnerist promise," that is occurring in the context of an historic capitalist crisis now in its sixth year, and every day it sees how both the conservative and "center-left" governments employ the same policies of reaching into the pockets of workers, in order to save the banks and monopolies.

The FIT is the only national force that condemns these policies and suggests that the employers must pay for the crisis. In this election, we were the only ones that were calling for voting against the adjustment that the big businessmen are proposing, and they are supporting the capitalist politicians to a greater or lesser extent.

The vote for the FIT was the most conscious in the whole election. We distributed an election Manifesto by the thousands, with our transitional program facing the current situation, where we set out our aim of fighting for a workers’ government. We creatively agitated for salient points of our program on radio and television. That does not mean that all our voters share our entire revolutionary perspective, but that they indeed identify with and support a large part of our program. We now have the challenge of putting the parliamentary seats at the service of developing and augmenting the workers’ struggles, of supporting class consciousness and of condemning the shady deals that the employers’ politicians are making behind the backs of working people. We are going to articulate the bills that we will present in Parliament and the legislatures with organizations of the unions, students’ organizations, organizations of the women’s movement, and of the struggle for housing. It is not a matter of presenting bills so that they can be shelved, but of political initiatives that will favor the mobilization and organization of the exploited and oppressed.

In the immediate future, the growth of militant activity in factories, plants, schools and universities is posed. We must use election support to take new steps in building the great revolutionary party that the working class needs in order to win.