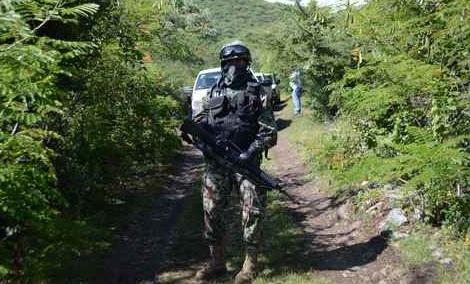 Between the night of Friday, September 26 and the early morning of Saturday, September 27, students from the "Raúl Isidro Burgos” rural teachers’ college of Ayotzinapa, Guerrero, that left the city of Iguala after carrying out fundraising activities, were pursued and shot at on two occasions by members of the municipal police and hired killers from the criminal organization Guerreros Unidos, a detachment of the cartel of the Beltrán Leyva brothers. In a third attack, the armed groups directed a burst of machine gun fire at a truck that was carrying the soccer team Los Avispones, of Chilpancingo.

Up to now, the toll of the dead is 4 normalistas (students in the field of education), a 14 year old soccer player, the driver of the Los Avispones truck and a female taxi passenger, in addition to tens of wounded and 43 students disappeared. On Saturday, October 4, clandestine graves were discovered on the outskirts of Iguala, to which, the testimony of a person allegedly involved in the slaughter led, although up to now, it has not been confirmed that the bodies found correspond to those of the normalistas who disappeared.

Together with the case of Tlatlaya, we condemn this new massacre that occurred under the government of Peña Nieto, that shows the decomposition of a state associated with drug trafficking, where, in the context of the war against organized crime, initiated by Calderón and continued by the PRI, hired killers operate as an armed paramilitary wing to repress the social struggle and to murder students, while leaders and members of the Regional Coordinating Committee of Community Authorities–Community Police (CRAC-PC), like Nestora Salgado are criminalized and arrested, for getting organized and exercising the right of self-defense, faced with this situation, just like many other social militants.

However, beyond the question of who the perpetrators of this massacre are, it is an expression and result of the constant repression and persecution against the normalistas by the different levels of government, from Los Pinos, the state and municipal governments. The administration of Ernesto Peña Nieto has kept and intensified the attacks against the normalistas, seeking to eliminate the rural teachers colleges and, through repression, to discipline their students, that have spent decades struggling against the systematic neglect of their schools and that, together with the teachers, have made themselves part of the struggle against the terrible educational reform. They are the sons and daughters of peasants and workers, whose only opportunity to get a college education is in the rural teachers colleges, where they are trained for the arduous work of teaching in the most remote and marginalized areas and communities of the country.

Now, the parties of this democracy for the rich have had, in order to try to impose terror on the normalistas, the support and fire power of the drug traffickers, that once more in Guerrero, show they are useful for the interests of the most reactionary groups of the state. The murders in Iguala are added to those of the 2 normalistas – also from Ayotzinapa – who died during the police repression of a blockade on the Autopista del Sol [highway] in December 2011, in actions that occurred under the current government of the PRD politician Ángel Aguirre Rivero, that continue to go unpunished. Now the Governor – cynically defended by the PRD, that wants to clear him of responsibility – has set up a search operation and is offering a reward for finding those who disappeared, in an attempt to save his own neck and divert attention from the repressive and pro-boss role of this party tied to the PRI administration of Peña Nieto (who responded by sending in the police), while the Mayor of Iguala – close to Aguirre and member of the PRD – and the local Security Secretary are fugitives.

However, parents, together with normalistas, undergraduates, teachers from the CNTE and inhabitants, have been carrying out searches (which the UPOEG joined) and various demonstrations of repudiation in Iguala, Chilpancingo, Acapulco, and other parts of Guerrero, demanding the return of the students alive and trial and punishment of those responsible.

The outrage is extending to a national scale (and could act as a catalyst for the discontent due to the misery and lack of democracy), as was seen in the mobilizations on October 2, in the students’ protests in the Politecnico against Osorio Chong and in the call for solidarity with the normalistas in Ayotzinapa made by Nestora Salgado, political prisoner and part of the the Guerrero community police, who are defending the “Raúl Isidro Burgos” school of education, as well as the EZLN’s call for a silent march in San Cristobal joining with the national call out on October 8. On an international level, there have been solidarity actions in consulates and embassies. The scandal has gained the attention of the UN and the IACHR and has the United States on edge. From the MTS we express our solidarity with the families and classmates of the normalistas that were assassinated and disappeared, we support the general outrage and demand the trial and punishment of those responsible, including the politicians! Down with Ángel Aguirre Rivero’s government! For the immediate return in good health of those who were disappeared!

However, we deem the institutions of the regime, like the government, the state government, the PRC, etc. incapable of following through with the necessary investigations to find the normalistas and punish those responsible. They’re part of the same state apparatus that, in collaboration with the drug traffickers, criminalizes, persecutes, and assassinates those fighting for social justice. Thus, it’s necessary to create an independent investigative commission, lead by the parents of the families and integrates representatives from national and international independent human rights organizations, the FECSM, the CNTE, and human rights activists. Such commission would demand the power necessary to follow through with investigations into the massacre that would reveal those responsible for the act as well as the politicians involved and demand their punishment.

We’re making a call to the normalistas organizations, student movements, organizations of workers, farmers, leftists, and human rights to put into action a National Organization Against Repression, that, along with those of Ayotzinapa, holds up amongst its principle demands: The liberation of Nestora Salgado and all of the prisoners of the CRAC-PC! The withdrawal of the army from Guerrero! The Immediate demilitarization of the country! !

We especially make a call out the unions like NCT and others that claim to be independent of the official government unions to back the normalistas and to not repeat the disgraceful experience of 1994, when the unions like CTM turned their backs on the indigenous farmers rebellion lead by the EZLN, loosing a historic opportunity for the workers’ and farmers’ movements to unite and confront this authoritative and anti-democratic regime.

In the same vain, we call out to the students of IPN to remain strong in the struggle despite the continuation or discontinuation of the strike and to become an active part of the solidarity with Ayotzinapa.

It’s necessary to push forward a National Meeting of Students to discuss a plan of action and a national stance against the attack on students and against the education reform, to which workers, farmers, and solidarity movements can join along with the student movement. We call out to the student movement, the normalistas in Mexico City and in all of the states, the union organizations like the CNTE, the NCT, and the UNT to unite with the national mobilization this Wednesday, October 8, and to push for a strike in solidarity with the students normalistas in Ayotzinapa and their families.