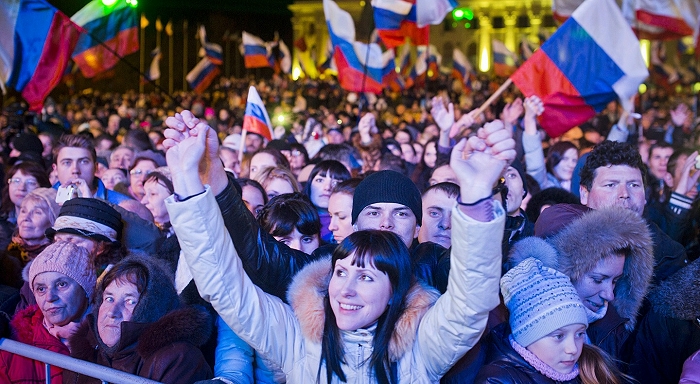 DEBATE WITH THE UIT-CI AND THE LIT-CI Ukraine: A “democratic revolution” in service of the pro-European bourgeoisie.

The massive demonstrations that ousted the now former president of Ukraine, Victor Yanukovich turned the eyes of the world toward this nation, particular since Ukraine has now become a battleground between the imperialist powers within Europe and the United States on one side and Russia on the other. For Marxists, the situation today in Ukraine presents the challenge of clarifying the current problems and outlining the way to a progressive solution to the crisis, independent of the two reactionary camps that now confront each other. Regrettably, a sector of the socialist left sees a victorious “democratic revolution” in the fall of Yanukovich without regard for the social forces that compose it, its political and strategic objectives, or the leadership at the head of these demonstrations. Such is the case with our comrades in the UIT-CI (Izquierda Socialista, part of the FIT) and the LIT-CI (whose largest section is the PSTU in Brazil) which coincidentally offer similar arguments that in Ukraine, there has been a “revolutionary victory of the masses”.

A “democratic revolution” which seeks to be a partner of European imperialism Although they had as undercurrents the economic hardships in the country and the anger against a corrupt and repressive government, the demonstrations of Maidan square were composed primarily of sectors of the middle class whose principal objectives were the signing of an economic agreement with the European Union. The rejection of this deal by Yanukovich and subsequent agreements signed with Russia finally triggered the demonstrations. The leadership of this movement ranged from pro-Western liberal opposition parties to the ultra-right which included openly nationalist, anti-Russian sectors. The prominent role of these neo-Nazi groups, in which the vice Prime Minister and many other cabinet members are members, was made clear after one of this first new measures of the government was the overturning of a law which protected non-Ukrainian minority languages, directly affecting the Russian-speaking population.

The UIT response to these events, reported widely in international media outlets, was to equate the demonstrations of Maidan square with the mobilizations of the Arab Spring, declaring that “in Ukraine too, a democratic revolution has triumphed by overthrowing the reactionary and pro-Russian Yanukovich”. This was achieved because “the power of the demonstrations was so strong that the people were able to overcome the pro-EU bourgeois leadership” But quickly, in the same paragraph, they are forced to recognize that “the Parliament unanimously removed Yanukovich (a quarter of the MPs had fled) and proclaimed a new government, a day after the people in Maidan square voted and approved most of the proposed new government members” and that “in the leadership of the movement, there are bourgeois sectors which now govern the country, like the party of Timoshenko and even pro-fascist nationalist sectors” So how do the comrades of the UIT explain that this “democratic revolution” which had “overcome its pro-EU leadership” ends by accepting a government of pro-Western bourgeoisie together with allies of the fascist right-wing?

As we see, the comrades of the UIT (and the LIT as well) speak about a victorious democratic revolution which overthrew an authoritarian government. They tell us that “as we did in the Arab Revolution, we support the revolutionary mobilization of the masses, while denouncing the pro-capitalist leaders that lead it” with the caveat that “if for now the revolution does not advance any further, it is because there is not a socialist and revolutionary leadership.”

According to this logic, for the UIT in Ukraine, there are not two equally reactionary and anti-worker groups. The fall of the Yanukovich government does not mean the change of one bourgeois clique for another and instead we are presented with an authoritarian government on one side and a revolutionary movement which overcame its bourgeois leadership on the other. In this manner, they situate themselves as the “critical wing” of the “democratic camp” of the struggle against the repressive government of Yanukovich and by doing so the legitimize the pro-imperialist bourgeoisie and the fascist right-wing, who are just as reactionary as the oligarchy which responds to Russian interests.

The UIT and the LIT repeat in the case of Ukraine the errors of seeing “democratic revolutions” in every anti-government mobilization, subordinating the struggle for a proletarian programme to the central demand of “down with the dictatorship” and the fight for working class hegemony to the bourgeois or petty bourgeois camp which fights against the dictatorship or authoritarian regime. As they did before in Libya or in the Syrian civil war where they followed behind of the pro-imperialist opposition as we’ve written in various debates (see LVO no. 461, 451, 420)

With its theory of “democratic revolution” the UIT and the LIT have lost the compass of revolutionary strategy, transforming the mobilization of sectors of the middle class led by ultra-right parties with a programme opposed to the interests of the workers and the people into a “victorious revolution”.

They end calling “a victorious revolution of the masses” the demonstrations led by bourgeois variants which seek to implement the austerity plans of the EU. Mimicking the discourse of the middle classes and the liberal bourgeoisie, the UIT and the LIT welcome the “revolution” that raises the demands of one sector, erasing with one broad stroke, the needs of the enormous concentrations of the working class in this country. They subordinate this supposed stage of “democratic revolution” to the necessary fight for a workers program capable of hegemonizing the poor of the city and countryside, and put the workers movement behind a “democratic front” uniting its interests to those of a sector of the bourgeoisie.

This strategy disarms the workers movement of a program capable of confronting the capitalist attacks and prevents them from finding a working class solution for this crisis.

But we maintain that the interests of the workers and the Ukrainian people are diametrically opposed to these reactionary groups and their internal agents. Only the working class can create a progressive alternative. The only realistic possibility for Ukraine to become independent is the fight for a workers and socialist Ukraine with national democratic rights for all ethnic groups and nationalities. This would be key for the social revolution in Russia and Europe, where Ukraine’s destiny will be ultimately decided.