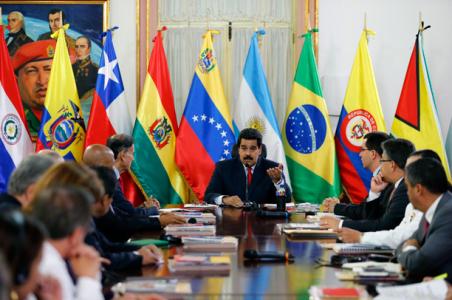 Crisis in Venezuela: From the Political Impasse to the Actions of UNASUR

The current political impasse in Venezuela does not seem to subside; political events continue to occur, such as the arrest of three generals of the air force for alleged conspiracy, the suspension of deputy Maria Corina Machado for agreeing to be Alternate Representative for Panama at the OAS, the increase in prices on staple goods as part of government agreements with entrepreneurial sectors, a new implicit devaluation through Sicad II. Meanwhile, the delegation of foreign ministers of UNASUR has already initiated a cycle of meetings with both the government and personnel from the right wing of the MUD.

Pushing the working people and imposing devaluation While national and international attention focuses on the ongoing tension between the government and the right-wing opposition, little attention goes towards the working people, the ones paying for the economic crisis. Since the agreements made between the government and economic groups, a generalized increase has been applied to prices of "regulated" products. Even the media highlights the fact that the increases go unnoticed and unannounced: many have risen 300%. Maduro’s government has decided to benefit employers as wages stagnate. But the surprise of the week, although it was an announced blow, was the premiere of the new Alternative Currencies Exchange System (Sicad II ), which started at a 51.8% average exchange rate of Bolivar (Venezuelan Currency) per dollar (a devaluation of 723 % over the Cadivi , and 380% relative to Sicad I). This is a mega-devaluation that in the facts ends legalizing the parallel dollar. The entrepreneurs ask and the government gives. But in this new system, where both the state and the private sector bidders would be in a "free" game of "supply and demand,” the reality is that the entity "dropping dollars" is the government itself, under a mechanism that ends up benefiting the state to cover the fiscal and current account deficits. Even Wall Street received enthusiastically the commissioning of the system: “there is euphoria at the first signs of pragmatism of Maduro’s Government to address macroeconomic imbalances,” declared the technocrats of the world of finances.

The moves of the Right and the reactions of the national government Anti-worker agreements advance and the political tensions continue. Since February the situation has remained "stuck"; nevertheless, the majority of the capitalist groups and the MUD political sector (the oppositional right), especially their hardest wing, have continued to advance. As we said before, in the last two weeks facts have not been characterized by massive participation but because of the impacts of different actions, the exception might be the situation in the state of Tachira, where 28 people died as a result of confrontations between the Right and the government. The "hard" section of the Right (the one that keeps pushing the situation) regains momentum with the recent dismissal of the right-wing Congresswoman, Corina Machado. At the same time, Diosdado Cabello (President of the National Assembly), argues that Machado accepted the position of alternate Representative of Panama without the authorization stated in the national constitution. Moreover, the government announces the arrest of three Generals of the air force with alleged participation in a coup in progress. The Chiefs of the Armed Forces manifest “cohesion” and ask for support to the government. But it is symptomatic that, if it is true the President holds that the so-called “cohesion” starts to have cracks in the sky, the escalation and major divisions will take the situation to a more convulsive course. It is clear, under a weak national government, the emboldening of the Right and the crises already generated, that the role of the air force becomes key in the already weak national balance.

The role of UNASUR and the OAS Since the initiatives of Washington and the Right across continental OAS have failed because of Maduro’s government, the intervention of UNASUR is a bet played by the Chavismo to gain international support. Nonetheless this remains to be seen, considering that the hard sector of the Right has already denounced this move. Meanwhile, the right-wing deputy Julio Borges (national coordinator of Nacional Primero Justicia–Capriles’ Party) said the meeting with the opposition and UNASUR foreign ministers was “very satisfactory,” and added “we realized they were not here to follow Maduro’s Commands ... they came to help,” a sign that this ‘moderate’ group is looking for an alternative pathway. Today (26/3) the round of meetings of representatives of UNASUR continues with representative sectors of students, both from the opposition and the government, yet it is too early to foresee the final role of the South American agency in the impasse of the national situation. The LTS holds today more than ever that we must devote all our energy into raising the strength of the working class, distinguishing our separate politics from the politics of the Right in all its wings, as well as the politics from the national government. In this context, we must fight for an independent workers’ outcome, launching the development of workers’ meetings at regional and national levels with our own demands and working program for the crisis.