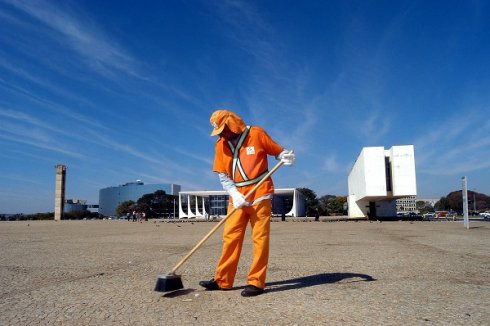 We workers must participate in the April 15 strike, by getting organized from the grassroots, so that it will be an effective national strike, as part of a plan of struggle that will have continuity with actions, mobilizations, work stoppages, and national strikes, to defeat the precarization law and the decrees of the government and the political caste in the Congress.

After the March mobilizations, all the organizations of the left and social movements of Brazil are talking about the need to construct a "third way" or an "alternative of the left." This, because the beginning of 2015 is marked both by the plan of adjustments of Dilma’s administration (and of the entire ruling class) and a new expression of right-wing leaderships, anchored in dissatisfaction, facing the innumerable cases of corruption and social discontent. Even those who gave Dilma their "tactical" vote, like majority groups of the PSOL, have had to admit "an exhaustion of the government and of the PT," and, at the same time, many people are raising the banner against an alleged "coup d’état mentality" and impeachment (removal).

The advance of the government’s attacks is perceived with the approval of Draft Law 4330. President Dilma has tried to engage in demagogy to appear "in favor of the workers," by declaring that "The government’s position is in the sense that outsourcing cannot jeopardize the rights of the workers." It is no more than demagogy of an unpopular President, because she continues defending outsourcing; she is only trying to secure for the government’s "safes" the guarantee that "the businesses hired will assure the payment of wages, of social security contributions and, at the same time, will also pay their taxes."

This attack has forced the pro-government union headquarters to respond, with the call for a national strike for the coming April 15. This national strike would have, as the only demand, the struggle against the Draft Precarization Law (PL4330) and the decrees of social security adjustment (MP 664 and 665). It is not possible to conceal the fact that the union headquarters are also responsible for the increase of outsourcing and of the dreadful working conditions, because they impeded the workers’ mobilization, to keep their agreements with the governments and the businessmen. Since President Dilma and Minister Joaquim Levy took office, those union headquarters have done nothing to organize, unite and mobilize the workers against the decrees of the PT and PSDB government; however, those struggles continue, isolated and abandoned by that union bureaucracy.

Despite this, all we workers must participate, by getting organized from the grassroots, so that April 15 will be an effective national strike, as part of a plan of struggle that will have continuity with actions, mobilizations, national work stoppages and strikes, to defeat PL 4330 and the decrees of the government and the political caste in the Congress.

In this unity, without any trust in the leaders of the CUT, CTB and the rest of the pro-government and pro-boss [union] headquarters, we have to discuss how to build an "alternative" or a "third way" independent of the government and the bosses, by taking up again the idea that we are not with either the government or with the right wing.

The left, facing the work stoppage and the national situation

If we analyze the politics of the organizations of the left, like, for example, the PSOL, we will see some limits. Before the March 13 and March 15 demonstrations, the national leadership of the PSOL published the so-called "Letter from Brasilia," that brought together a series of proposals for confronting the crisis, a document critical of Dilma’s government. However, after the March 15 actions against Dilma’s government and corruption, big figures from the PSOL, like the Federal Deputy Ivan Valente, together with André Singer (PT) and Guilherme Boulos (MTST), defended the formation of a "Social Front" or "Popular Front," in order to, theoretically, fight the "advance of the right wing": "Among the participants, a consensus that it is possible to unify the left, developed. Not against Dilma’s government, that, at no time, was cited as the main enemy. But against the adjustment of the right wing – which means the hijacking, by the right wing, of a government elected with a leftist discourse. And especially against the right wing that fills the streets and the Congress with hatred," according to a site tied to the ruling party.

In this debate, at least from part of one of the wings of the PSOL, led by Ivan Valente and Randolfe Rodrigues, the return of that idea of defending the "lesser evil" is clear. The banner "against the right wing," when it is not clearly distinguished from Dilma’s government, ends up in practice being a defense of the government as a "lesser evil." Other organizations of the left, like the PCO, are no longer trying to hide it: it is the emphatic defense of Dilma’s government against an alleged "coup d’état."

The leader of the Homeless Workers Movement (MTST), Guilherme Boulos, is critical of Dilma’s government, but "is frequently with the former President Lula," according to the news item mentioned. In a shared announcement, among other organizations, with the CUT, the PSOL, the Juntos youth group (from the MES of Luciana Genro), the MTST is calling an action for the 15th of April at 5 p.m., with the slogan "Against the right wing, more rights." This action, despite criticisms of the "federal government" (without citing President Dilma’s name), in reality, is trying to disguise its support for the President and the PT, as if we were facing a real threat from the right wing’s tendency to military coups, as if the federal government and the PT – with Lula at the head – were not turning more and more to the right, handing over greater political powers to the PMDB, as a guarantee of "governability," that is, recovering the political conditions to implement the economic and social adjustments that will preserve the interests of the capitalists and of the political caste against the labor and social rights of the working class and of the previously allied "Class C."

In this setting, Luciana Genro, a main figure of the PSOL, has used the slogans that say "The way out is on the left," but now, when she is allying herself with the MTST and the project of a "social front," she is more emphatically using the slogan, "More rights," and not "Against the adjustments of Dilma-Levy." In the most recent meetings of the CSP-Conlutas, a debate was begun about the formation of unity of the left, where all the tendencies of the PSOL uncritically defended unity with the MTST, even dividing the CSP-Conlutas itself, where the PSTU correctly charged that this front (which last year had the name "Front for Popular Reforms") was ending up serving as a support, although disguised, for Dilma’s government.

This April 15, we have to take the struggle against PL 4330 and the adjustments, to the end. For that reason, the action called for 5 p.m. should be a direct expression of the workers’ entrance on the scene, taking up for themselves the demands for the national strike that must be effective and built in rank and file assemblies, with picket lines and roadblocks that will be a show of the workers’ united strength.

In a demonstration like this one, it is posed that the left, its unions and the combative social movements form an anti-government bloc, preventing the CUT and the MTST from using the mobilizations to "armor-plate" – even indirectly – the government of Dilma and the PT. Only in this way will we be able to move forward in a unity of the left that will point to a third force, neither with the government (and the PT), nor with the right wing.

(*) The author is a leader of the Revolutionary Strategy League of Brazil and of the São Paulo University Workers’ Union (SINTUSP).