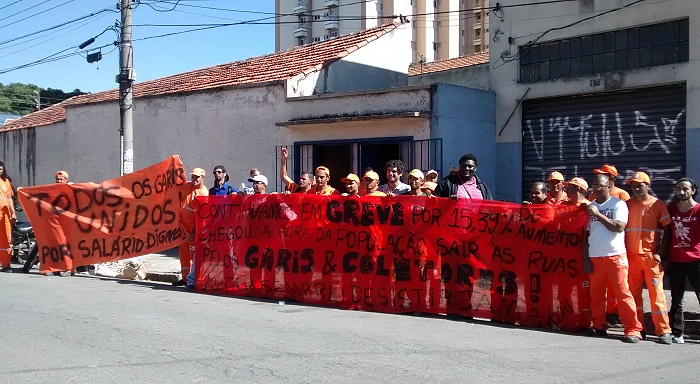 Continue the struggles of the Sao Paulo sanitation workers! Unite the workers use their own methods to achieve all their demands! 04/07/2014

Since last Monday, March 31st, urban garbage collectors and street sweepers in the six cities of ABCDMR, [major industrial cities to the southeast of Sao Paulo], except Rio Grande da Serra, stood firm in demanding a 15.39% wage increase and better working conditions. Conscious of the example set by the sanitation workers in Rio de Janeiro during carnival, the workers have given a strong example of combativeness every day that they resist the harassment of the employers threatening them with layoffs and political persecution. Santo André workers were on the cover of one of the main regional newspapers with banners and posters from Wednesday and Thursday’s actions, where the base pressured the union to continue mobilizing to win popular support and pressure the Carlos Grana (PT) government to expedite his response to the demands.

The enemies of the ABCDMR sanitation workers

The mayor, trying to abstain from responsibility, said that it is the companies that refused to accept the increase demanded by workers, “ignoring” the fact that the responsibility for sourcing such an essential service such as street cleaning falls upon the PT in city halls across the country. Despite the name “Workers’ Party,” it governs for big businesses and favors companies such as those that now refuse to give a fair wage increase to these workers. While politicians pursue corruption cases and investigations into the misappropriation of funds, they continue to receive exorbitant salaries. We challenge the mayor to try to survive with the salary of a street sweeper or garbage collector! If you value the workers, then why not contract these workers directly through the city hall, and offer equal pay, equal rights for all?

SIEMACO (Union of Employees in Companies Providing Services for Cleanliness and Conservation, Urban Cleaning, and Maintenance of Public and Private), like the union in Rio de Janeiro, is directed by the UGT. Throughout the week the UGT tried to prevent the unification of the six cities on strike and tried to stifle Rio de Janeiro from being used as an example by equating it with terrorism, saying it would be bad for the image of ABCDMR workers to follow, thus acting to serve the employers by dividing and weakening the workers.

At the last meeting held on Friday (April 4th), the UGT bureaucracy shamefully betrayed the workers by not allowing even minimal democracy, banning all workers’ use of the microphone, and not allowing a vote on the proper response to the TRT’s (Regional Labor Court) decision to declare the strike illegal. The union that should have been on the side of the workers said: “We cannot strike against the courts. The decision was made, the employer association will not increase its proposal of 10%, and there is nothing more to do. The official position of the union is to end the strike, and we will talk with the workers to fulfill this decision.” [1] Rejection of the union’s treacherous policy was huge. With lots of screaming, workers announced that the union would not go away, and they would continue the fight for their demands. Organized by workers’ shops floor committees, they left the meeting with many tasks to reorganize the movement and insist on their demands.

The PT newspaper ABCDMaior, freely distributed, also tried to discredit the struggle of the sanitation workers by saying in the General Assembly on Friday [2] that the strike was considered abusive and announced the attempt to defeat it orchestrated by the Regional Labor Court (TRT) and the UGT union bureaucracy: “the hearing decided on an adjustment of 10%, as proposed by the companies. The trial authorized compensation for the days of the strike, but has not guaranteed job security to the strikers.”

Independent rank-and-file organization without trust in the traitor union, governments or bosses!

Saturday, April 5th, was a very important day to reaffirm the strike without the yellow union and to take up the historical methods of working class organization by reorganizing the strike with their own hands. With many contradictions due to the subjective nature of the workers’ reorganization, ABCDMR sanitation workers proved the leading role that the working class can take. The main landfills in the region, Peralta (Santo André) and Lara (Mauá) are still paralyzed, with Peralta being the most radicalized, emanating strength to the rank-and-file of the six cities. The rank-and-file’s formation of elected worker committees with a leadership subject to recall has been fundamental to maintain the strike and create another form of organization in the fight against the bureaucratic methods of the UGT union, causing workers to be subject of the fight and the decisions integral to the course of the struggle.

Today, Monday, there will be a great opportunity for workers to unite the six cities on strike through their elected and recallable strike committee leaders and a general assembly. This organization is decisive for the sanitation workers to silence the threats of replacement for the strike days, layoffs, and the “non-negotiable” 15% wage increase.

There is also an action scheduled that should result in the strengthening of the anti-bureaucratic struggle, with the sanitation workers as the lead protagonists. Expand the active solidarity network to fight for the ABCDMR sanitation workers The Liga Estratégia Revolucionária, along with the students from the Juventude ás Ruas and the women from Pão e Rosas, were on the side of the sanitation workers from the start, supporting their demands and actively organizing solidarity in universities where we have members. From the DCE USP slate Maré Laranja to the student organizations that we lead in the Academic Center for Humanities (IFCH) at UNICAMP and the Academic Center of Philosophy (CAP) at UFMG, we provide solidarity. We will also continue putting our small forces together with the Movimento Nossa Classe by surroundomg the workers’ struggle with solidarity that will lift it to the national scene.

Building upon the support given by the São Paulo subway and RJ sanitation workers, we appeal to leftist organizations, social movements, and human rights groups to show solidarity with the ABCDMR sanitation workers’ strike. We believe that if the majority wing of ANEL and CSP-CONLUTAS, both directed by PSTU, take this campaign we are calling on facebook Todo apoio a luta dos garis do ABCDMR [Everyone support the ABCDMR Sanitations Workers] to the top of its hierarchy, we can discuss in every workplace and organize a strike fund to create conditions that allow these workers to continue fighting and winning popular support. We have already gathered several photos of support and more than 450 “likes.”

So with a strong show of solidarity, workers and youth demonstrate that after the June protests last year and the sanitation workers’ victory in Rio de Janeiro, the workers are returning to the national political scene with full force.

JUST LIKE IN RIO, THE ABC SANITATION WORKERS CAN WIN! We are on the side of the sanitation workers by supporting the following demands: 15.39% WAGE INCREASE NOW! MAY THE MAYORS EARN THE SAME AS THE SANITATION WORKERS! NO WAGE LOSSES FOR STRIKE DAYS! FOR THE RIGHT TO STRIKE! NO LAYOFFS, RETALIATION OR POLITICAL PERSECUTION! FOR A UNION WITHOUT BUREAUCRATS, IN THE HANDS OF AND CONTROLLED BY THE WORKERS!