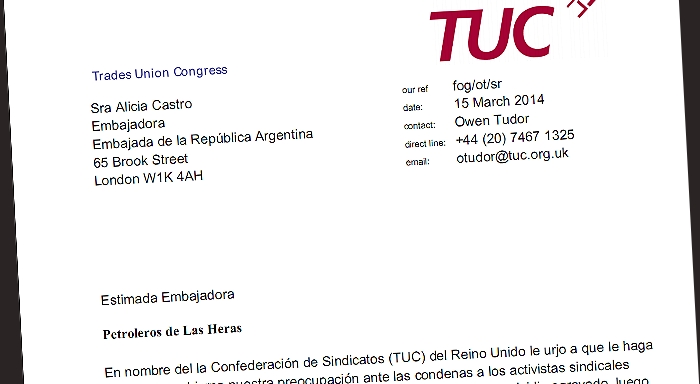 The Trades Union Congress (TUC), the sole union federation in the country, is made up of 54 affiliated unions and represents almost 6 million workers across England, Wales and Northern Ireland. The TUC General Secretary, Frances O’Grady, has sent a letter to the Ambassador of Argentina in Great Britain, Alicia Castro, requesting that the concern that the TUC has for the life sentences handed out to Las Heras oil workers be conveyed to the Argentine government.

Las Heras oil workers On behalf of the Trades Union Congress (TUC), I urge you to convey to your government our concerns about the convictions of trade unionists Inocencio Cortez, José Rosales and Hugo González for aggravated homicide, following the 2006 industrial dispute in Las Heras.

The TUC understands that there are serious allegations of violence against defendants and witnesses, including public statements by the prosecutor admitting to physical abuse of witnesses that may constitute torture, as well as a number of other irregularities in the investigation and the evidence presented.

We believe that the behaviour of the authorities during the 2006 protests, including the arrest of Mario Navarro, suggests a concerted attempt to disrupt legitimate trade union activity through illegal means.

The TUC therefore urges your government to overturn convictions that are based on compromised evidence, and investigate the conduct of the whole trial to uncover and deal with abuses of the human rights of defendants and witnesses alike.

I am sure that you will share my concern and I would be grateful if you could let me know your views.