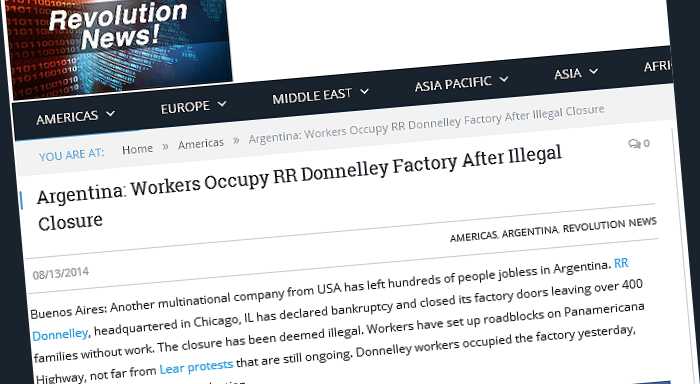 Buenos Aires: Another multinational company from USA has left hundreds of people jobless in Argentina. RR Donnelley, headquartered in Chicago, IL has declared bankruptcy and closed its factory doors leaving over 400 families without work. The closure has been deemed illegal. Workers have set up roadblocks on Panamericana Highway, not far from Lear protests that are still ongoing. Donnelley workers occupied the factory yesterday, August 12th and put it into production.

“The workers at Donnelley are calling for a general assembly at 7.30am at the gates of the factory, on the Pan-American Highway, Km 36.7. We have just learnt that the company has been closed down, and in a totally illegal manner because the bankruptcy petition it submitted has not been accepted by the courts. We will assess what measures to take in order to denounce this abuse of the workers. If necessary, we will blockade the Pan-American Highway. We will also take steps to protect the factory and its assets, to prevent the illegal disposal of its stock and machinery, and to defend the 400 jobs.”

“After making $218 million in 2013 at a world level, the company presented a financial insolvency application in order to sack the entire workforce. This application was rejected by the shop stewards’ committee, the trade union and the Ministry of Labour. The workers not only demonstrated that this company is not in crisis, but that it has also been carrying out shameless manoeuvres in order to empty the factory and divert production to other printing companies. Now it is engaging in a new manoeuvre by filing for a fraudulent bankruptcy in order to intimidate and threaten the workforce, with the aim of implementing its plan for mass lay-offs.”

“The workers denounce this closure as illegal and we are not going to allow it. We demand the immediate re-opening of the factory and make a call to other workers, social organisations and the local community to support our struggle for the defence of our jobs.”