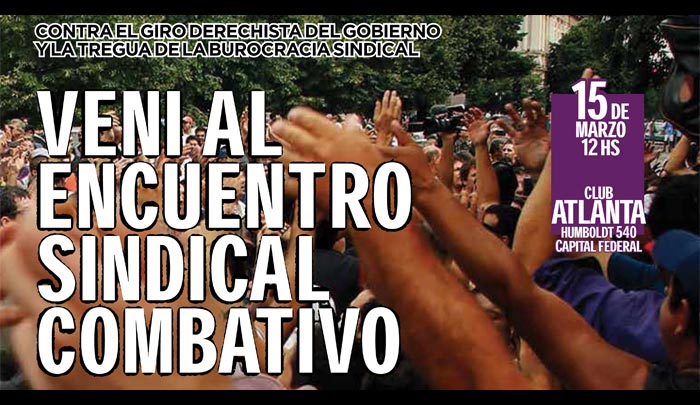 Argentine: Towards a National Conference of Fighting Unions.

MARCH 03 2014 The Kraft factory shop steward committee, led by Javier Hermosilla and Lorena Gentile, Raúl Godoy, ex deputy for Neuquén province and a Zanon worker, José Montes, trade union representative from Astillero Río Santiago, the Alicorp (ex Jabón Federal) shop steward committee, represented by Franco Villalba, Eduardo Ayala, leader of the graphic workers and from the group Agrupacion Bordó, Claudio Dellecarbonara, rank and file delegate from Buenos Aires Subways and a lead member of AGTSYP Union–all leaders within the PTS–together with Rubén ‘Pollo’ Sobrero, general secretary from the Haedo Railways Union, Carlos ‘Perro’ Santillán, general secretary from SEOM (Jujuy province), hundreds of shop steward committees and combative rank and file delegates from the metal, tyre, air transportation, telecommunication and paper industries and from the teachers’ unions that oppose the government, (SUTEBA, ATEN, ADEMYS and others), federal and state workers from ATE, the shop steward committee from Castro Rendón Hospital, Neuquén province, and other unions are calling to a National Meeting of Combative Unions that will be taking place on March 15th in the Atlanta indoor stadium. Representatives of current workers’ struggles, such as the metal workers from the Liliana Factory (Rosario city), workers from the Kromberg automotive parts factory (Pilar Industrial park), teachers from across the country, and state workers from Jujuy province will all be taking part, as will Ramón Cortés, one the Las Heras oil workers sentenced to life imprisonment.

Unions’ conference - ATLANTA Stadium –Saturday, March 15th. 12 p.m. We are calling for the unity of all the combative unions.

After a decade of the Kirchners in office, the realities facing the working class and the poor make clear that only ones who have benefited during this period are the bosses, the multinationals and large corporations, the landlords, the bankers and the corrupt politicians close to power. The working class, on the other hand, has suffered through the structural adjustment program carried out by the government with inflation and devaluation, a decrease in the purchasing power of our salaries, and outsourcing and labour liberalization, with suspensions and layoffs. In addition, the raising of interest rates has choked the families in debt and benefitted the bankers. This so called “government of the people” supported trade union bureaucrats who became bosses and now keep on ruling the trade unions. This is the case of Pedraza, who was the murder of Mariano Ferreyra (Partido Obrero militant who was killed on 2010 during a train workers’ protest) in order to stick up for his businesses with the bosses. The government criminalizes protests by persecuting thousands of activists. The worst case is that of the oil workers from Las Heras, who were sentenced to life imprisonment in a fraudulent trial. Workers’ organizations must fight together for our salary and for our jobs. They are two sides of the same coin, contrary to what the unions’ bureaucrats say, who urge us to accept wage cuts using the argument of the bosses that we could suffer layoffs or suspensions. The situation of the retired and those receiving government aid isn’t any better. While the Kirchner government pays the external debt and its interests rates, and decides make deals (??) with Repsol. The provincial governments give away our natural resources to the mining, oil and soy companies as the poor and the workers continue suffering austerity and hunger. As this situation is developing, workers’ struggles have increased, but they are being isolated because the union bureaucrats are doing nothing for them. On the contrary, they have meetings with the bosses’ politicians, and they are part of their political parties’ lists. Some sectors of the political and unions’ opposition proposed a consejo económico y social,whose aim is to put pressure on the workers’ struggles. By not developing a plan to continue the fight that started with the successful general strike of November 20, 2012, the CGT and CTA union federations are allowing the austerity measures to pass. It is time for the militant and anti-bureaucratic sectors emerging across the country to coordinate support to all the struggles going on, with the perspective of a national strike and a fight-back plan to benefit the entire working class. This appeal has the purpose to call all the unions, shop steward committees, trade unionists activists, and rank and file workers who are willing to unite in actions and coordinate, beyond the framework of the Unions and National Organizations they belong to.

We are calling all the workers to a National Conference of the Combative Trade Unionism to fight for thefollowing demands: