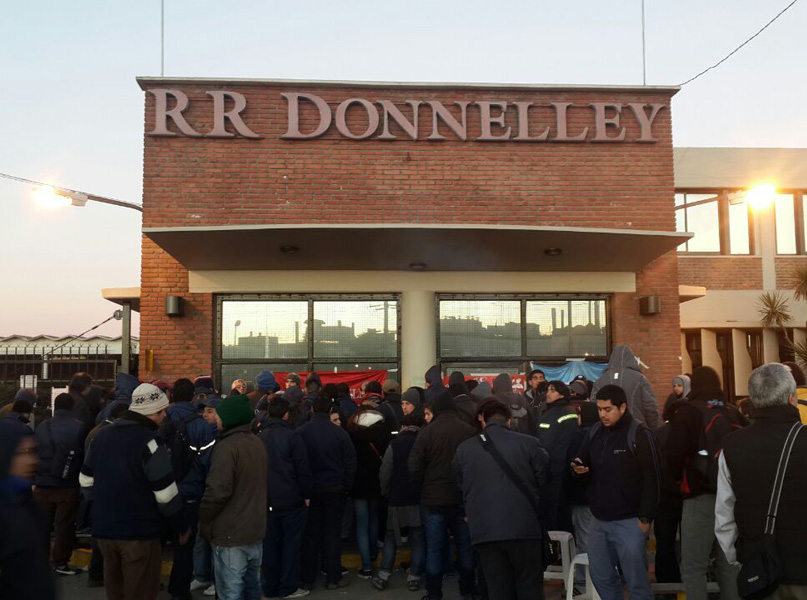 Press conference at the Plant at 11 a.m. (local time)

(Garín district, Buenos Aires, 12/8/14). Trade union delegate Jorge Medina said: “after closing its plant in the Garín district of Buenos Aires Province, Argentina, in a totally illegal fashion, leaving more than 400 families on the street, and that the Ministry of Labour confirmed that the company is breaching the ruling of the court that ordered both sides to have (compulsory) arbitration to resolve the labour dispute, the shop stewards’ committee and workers at R.R. Donnelley have resolved in an assembly to occupy the factory and begin production, in order to defend the 400 jobs. The workers denounce this closure as illegal and we are not going to be intimidated. We demand the immediate re-opening of the plant under the same working conditions, number of workers and salaries. If the company alleges that it is in bankruptcy we will begin production.

Another trade union delegate, René Córdoba, added: “We are not going to allow this factor to claim that it is in bankruptcy and to close down after making $218 million in 2013 at a world level – and even greater profits this year. Several trade unions all over the world have already denounced that this company closes factories overnight as a tactic to intimidate workers. We will also take steps to protect the factory and its assets, to prevent the illegal disposal of its stock and machinery, and to defend the 400 jobs. Over the last weeks we have been giving our support to workers at Lear – an American multinational company which is also seeking to leave dozens of families on the street. In addition, Lear is ignoring the elected trade union representatives.”

Trade union delegate, Martin Killin said: “The workers at Donnelley are calling for a Press Conference at 11a.m. (local time) at the plant. We make a call to other workers, social organisations and the local community to support our struggle for the defence of our jobs. We make a call to other workers in the printing sector to carry on the resolution voted in the Plenary Meeting of the Printing Federation of Buenos Aires province to refuse to print Donnelley’s products. We also insist on our proposal to call strike action in the sector. ”