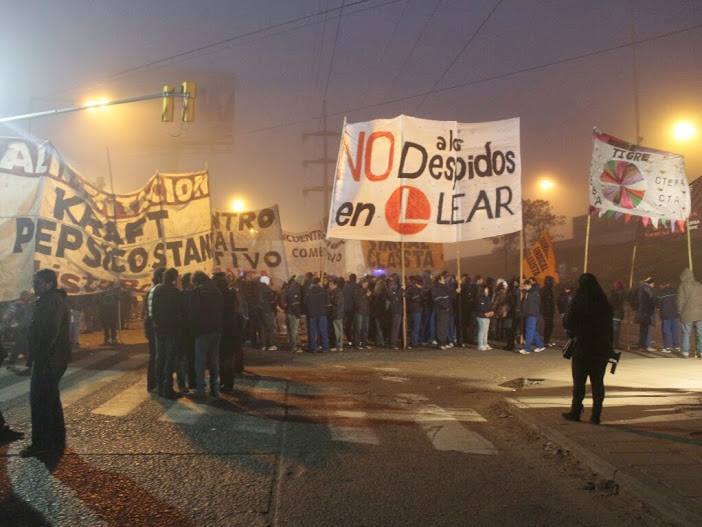 Argentina: On Tuesday July 8th, a national day of struggle in solidarity with Lear workers and against layoffs

Rubén Matu , shop steward at Lear announced “This Tuesday, beginning at 5:00 a.m., we will launch a national day of struggle to demand the reinstatement of all laid off workers at Lear. We will also be fighting against the layoffs that are occuring throughout the country. This is happening in Lear, in Emfer, where the workers suffered police repression, and other factories such as Donelley and Valeo, where the employers are carrying out massive layoffs.

At 5:00 a.m., a rally will take place at the gates of the Lear plant in Pacheco. At the same time, road blockades will be taking place in Buenos Aires province, Cordoba, Mendoza, Neuquén, Rosario and Tucumán. Road blockades and mobilizations will be led by workers and organizations standing in solidarity with our struggle”.

Matu added “with this day of struggle, we want our fight to be known across the country. More than one hundred workers have been furloughed without pay and another hundred workers have been laid off, even though Ford (who buys Lear products) has not seen any drop in their production. It is scandalous that Ford and the Lear Corporation will import products from abroad that Lear now produces in Argentina, while they leave our families in the streets. What they are doing should be called fraud.” “The Company is acting illegally. They will not let our elected shop stewards inside the factory, violating our rights. Meanwhile, the Labour Ministry is doing nothing. The SMATA leaders are also refusing to act and are complicit in the layoffs by maintaining their silence.

For these reasons we have organized this national day of struggle for the reinstatement of all the laid off workers and for an end to the illegal furloughs and the attacks against the workers’ representatives.”