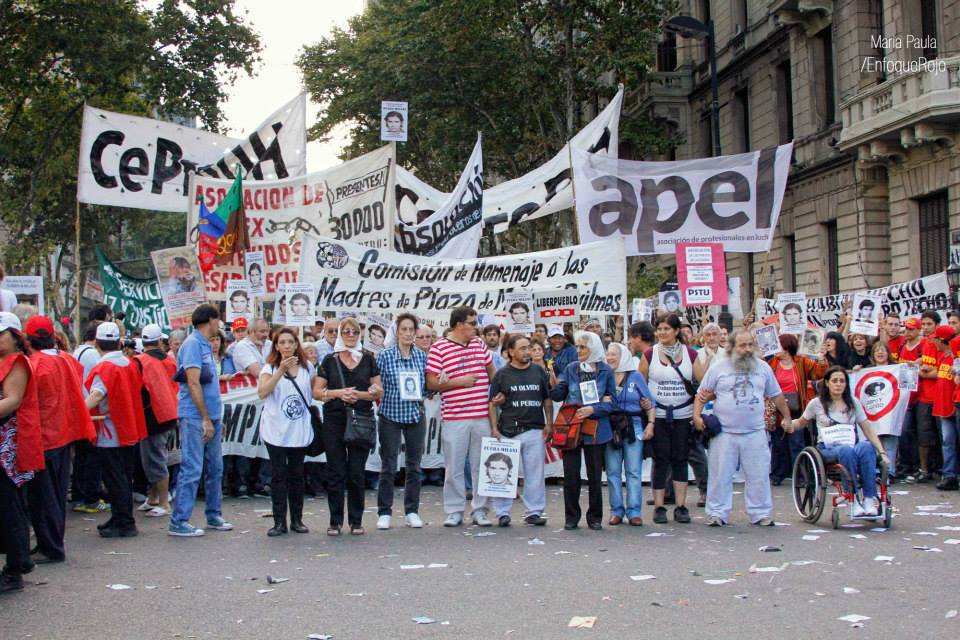 The plazas and streets belong to the fighters and the left

Buenos Aires, Córdoba, Mendoza, Neuquén, Jujuy, Mar del Plata, Bahía Blanca, Rosario, Tucumán and other cities across the country were the setting on March 24 for massive mobilizations of human rights, trade union, student, cultural and left-wing organizations that marked the 38th anniversary of the military coup. To the historic slogans of "trial and punishment of all the guilty," "open all the archives of the dictatorship" and "30,000 comrades detained and disappeared, ¡presentes!" were added other slogans such as “acquit the convicted from Las Heras", "Against austerity, the criminalization of protest and repression," and "Milani Out!"

The march organized by “Encuentro Memoria, Verdad y Justicia” (EMVyJ – Meeting for Memory, Truth and Justice) to the Plaza de Mayo was significantly larger than the one held only hours before by the government of President Christina Kirchner and its related groups. So much so that the official media could not ignore the massive independent march, much less publish pictures of the plaza supposedly “packed” with pro-Kirchner forces.

Marching at the head of the enormous rally were Ramón Cortés, convicted oil worker from Las Heras, Franco Catrihuala and Claudia Panfundi, relatives of other convicted oil workers, well-known representatives from human rights groups such as Nora Cortiñas, Elia Espen and Mirta Baravalle from the Madres de Plaza de Mayo, Enrique Fuckman from the Association of the Formerly Detained and Disappeared, the lawyer who denounced the government espionage of ‘Project X’ Myriam Bregman, the grandchild recovered by the Grandmothers of Plaza de Mayo Victoria Moyano, Patricia Walsh and victims of ‘trigger happy’ police such as comrade Carla Lacorte. Many from a large number of militant, anti-bureaucratic workers groups were there as well as representatives from left-wing organizations such as national deputies Nicolás del Caño and Christian Castillo (PTS/FIT), Subte delegate Claudio Dellecarbonara, Néstor Pitrola and Alejandro Bodart, among others.

In the Plaza a lengthy document which denounced the Government’s policies on human rights, economic austerity, impunity and repression was read out. The document’s highlight was the denunciation of the verdict that has sentenced the Las Heras oil workers “for a crime they did not commit” (a verdict that was defended by Christina Kirchner in the Legislative Assembly), as well as the demand for the removal of the Army chief César Milani.

At the end of the demonstration, the PTS held a rally on the Avenida de Mayo where oil worker Ramón Cortés and Nathalia González from the teachers’ union SUTEBA Matanza (United Education Workers’ Union of Buenos Aires) spoke.

The PTS in the FIT mobilized its members on March 24 in the major cities in Argentina. In the Federal Capital our party made up one of the largest and most spectacular contingents to take part in the Encuentro Memoria, Verdad y Justicia. Hundreds of placards with the slogan “Cristina lies, the oil workers are innocent” adorned the contingent that enthusiastically entered the Plaza de Mayo to hear the reading of the consensus document.

The PTS contingent was lead by more than 400 teachers from the militant teachers’ groups of the Corriente 9 de Abril (April 9th Current) and La Marrón (The Brown List) of SUTEBA, who denounced President Christina and Governor of Buenos Aires province Daniel Scioli. The day before the demonstration, Chief Minister Jorge Capitanich had attacked the education workers for not accepting Judge Terrier’s order to end their strike. This is the same magistrate who was a member of the Bonaerense (Buenos Aires police force) during the dictatorship.

The teachers’ unions of SUTEBA (where the far-left Lista Multicolor coalition now controls several branches) and Ademys (Middle and Upper School Teachers’ Association) took part in the EMVyJ march. This was in part the result of the political campaigns that La Marrón has promoted in the unions, particularly through various union Human Rights Secretary positions that La Marrón has won. The decision to take part in the EMVyJ demonstration runs counter to the decision of the bureaucracy of CTA leader Hugo Yasky, SUTEBA leader Roberto Baradel and UTE (Education Workers’ Union) leader Eduardo López. Even after adding their names to the petition for the acquittal of the Las Heras oil workers, these bureaucrats decided (without any mass meeting or plenary vote) to march with the same government that appointed Cesar Milani, protects the judges of the dictatorship and lies about the legal case of the oil workers.

Ramón Cortés: "This struggle must continue until we are all acquitted"

“Our struggle began to be known when people first heard that we were sentenced to life imprisonment without proof and without any foundation, simply to silence us from the moment we went out to fight against the income tax hike and subcontracting. This struggle must continue until we are all acquitted. And we demand the freedom of the five comrades that were detained twenty days ago in Las Heras, who are also oil workers, and freedom for all charged and persecuted comrades”.

“Personally I condemn the attack on the teachers. I am a father that says that if the teachers do not earn good money the children are never going to make the most of their studies. On this March 24, of Memory, Truth and Justice, I also condemn the genocidal Cesar Milani who today is in charge of the Army and the Anti-Terrorist law. They are now applying these laws in Las Heras, where each time that you go out to protest they put you in jail . . . We are hoping that justice will prevail. If they go so far as to resolve that we prisoners are going to lose interest than I, even while imprisoned, will continue fighting for the freedom of all those prisoners. I also bring greetings from the other oil worker comrades from Las Heras, who cannot be here. We do not want any more political prisoners. We need to come out fighting. Fuerza en la lucha (strength in the struggle) and thank you for joining us”.