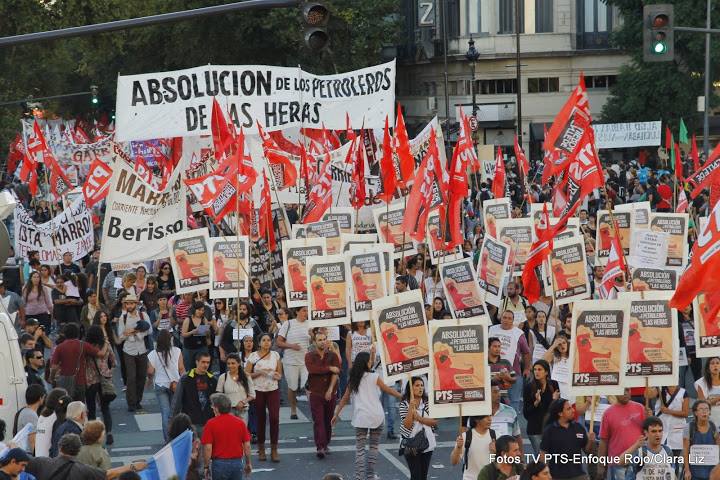 March 24th The PTS was part of the massive march against the the policies of the government and for the acquittal of the Las Heras oil refinery workers.

“Cristina lies, the oil workers are innocent: acquit the convicted from Las Heras," "Against austerity, the criminalization of protest and repression," and "Milani Out!" were among the slogans of the massive march organized by “Encuentro, Memoria, Verdad y Justicia” (Memory, Truth and Justice) which took place on the 38th anniversary of the military coup. These slogans ran alongside the traditional ones demanding "Trial and punishment of all the guilty," "Open all the archives of the dictatorship" and "30,000 comrades detained and disappeared, ¡presentes!" The attendance at this march was significantly larger and more important than the one held hours earlier by groups in support of President Cristina Kirchner. Marching at the head of the rally were convicted Las Heras oil workers as well as well-known personalities from independent human rights organizations, left-wing parties and militant, anti-bureaucratic workers groups. These included national deputies Nicolás del Caño and Christian Castillo (PTS / FIT), the lawyer who denounced the government espionage of ‘Project X’ Myriam Bregman, the Subte delegate Claudio Dellecarbonara, victims of ‘trigger happy’ police such as Carla Lacorte, the grandchild recovered by the Grandmothers of Plaza de Mayo Victoria Moyano, along with mothers of the Plaza de Mayo, such as Nora Cortinas, Elia Espen and Mirta Baravalle, and other leaders of the left.

One of the largest and most colourful columns was that of the PTS, which was headed by hundreds of teachers who condemned the national government, Buenos Aires Governor Daniel Scioli, and the ruling of a judge who "tried to curtail the workers’ right to strike". Hundreds of banners and placards with the slogan "Cristina lies: the oil workers are innocent," referring to the conviction of the Las Heras oil refinery workers, could be seen throughout the rally.

Towards the end of the rally, a lengthy document which denounced the Government’s policy on human rights, economic austerity, impunity and repression was read out. A key moment of the rally was the denunciation of President Cristina Fernandez’s speech to the Legislative Assembly where she defended the life sentences handed out to the Las Heras workers. The PTS / FIT deputy Nicolás del Caño denounced the President’s stance: “These workers were sentenced at the behest of the oil companies, in a trial without any real evidence, a trial plagued with torture and mistreatment, whose sole purpose was the intimidation of the militant workers of northern Santa Cruz.”

For his part, the national deputy and PTS leader Christian Castillo reported that "in recent times we have seen how judges still act as if they were in a dictatorship. First, there is the scandalous sentence handed out to the Las Heras oil refinery workers. Second is the incredible ruling, tailor-made by Scioli to try and break the teachers’ strike, made by a judge who was part of the “Bonaerense” (Buenos Aires Police) and has just reinstated the police officers responsible for the disappearance of teenager Luciano Arruga."