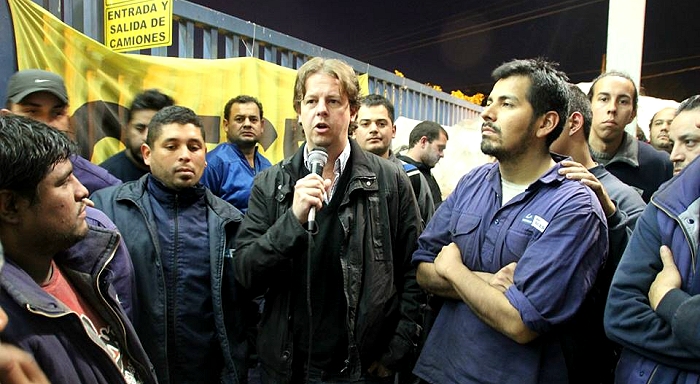 Left and Workers’ Front provincial MP Christian Castillo today rejected the ‘outrageous’ statement made by the Minister of Production, Debora Georgi, whom he said “had gone too far in her servility towards the bosses and the trade union bureaucracy by rejecting the arbitration process announced at the Gestamp plant by the Minister of Labour of Buenos Aires Province”. “Arbitration would allow the 69 workers who have been laid off to return to work,” he said.

“Georgi’s statement shows that she is a functionary of the big companies and of a trade union bureaucracy responsible for the assassination of Mariano Ferreyra. It is particularly disgraceful for her to say that she regrets that the conflict did not end up with the sacking of workers and with their families on the street,” declared Castillo, who is a leading member of the PTS.

“It is a complete lie that during the conflict the workers resorted to any kind of violence. On the contrary, during the occupation in the factory the workers were subjected to psychological pressure and were only allowed limited amounts of food, drink and blankets. As human rights organisations have already pointed out, the factory was militarised. “

“Is the Minister of Production trying to create similar situations to those that led to the assassination of Mariano Ferreyra?” Castillo said in conclusion.