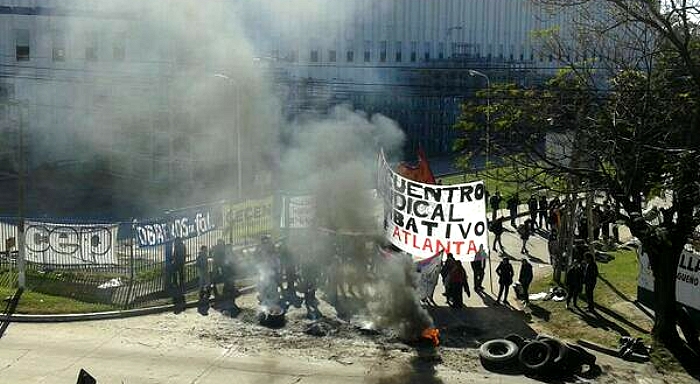 On the morning of Tuesday 27 May, during a day of action against 69 layoffs at Gestamp automotive industry in Escobar district in Buenos Aires province, a group of 9 dismissed workers entered the factory in a pacific way to demand their reinstatement. Members of shop steward committees, trade unions and rank and file activists organised a meeting of solidary Outside the auto parts factory - owned by Gestamp Automocion of Spain. The action had been voted in the Meeting of Fighting Trade Unions that had taken place on May 24. . The workers who went to the factory to giver their solidarity also helped to ensure the blockades the gates of Gestamp plant. Some workers had stopped production and as a response the bosses decided to give workers the day off. The provincial police force stayed in the Panamericana Highway while there was a large police operation both inside and outside the factory. With this backdrop the Lear Corporation have suspended several workers in the automotive industry.

Gestamp supplies with automotive parts to Volkswagen and Ford companies; they have earned large fortunes in the last years. The dismissed workers have pitched tents (as a way of protest) in front of the gates of the factory some weeks ago, and they have received so far the solidarity from different human rights organizations. They will stay inside the factory until their demands are met. FIT national deputy, Nicolas del Caño, who has donated money for their strike fund, went the factory to express his solidarity. The workers issued a press release to challenge a communiqué by the bosses slandering the workers and justifying the dismissals, a claim also backed by the bureaucratic union SMATA. The workers have noted that the dismissals took place when the workers’ denounce the plan of the management to suspend and dismiss workers as selective and discriminatory.

Solidarity with Gestamp workers! Everybody in!