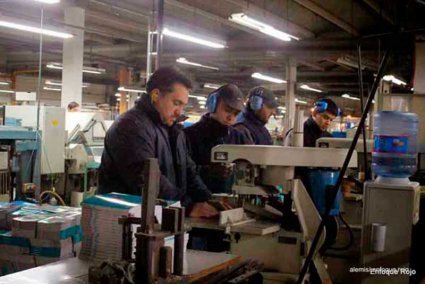 Donnelley: expropriation without compensation and nationalization under workers’ control

After the meeting of striking workers that we held Saturday August at the entrance of 16th, at the entrance of Donnelley plant, along with the Internal Commission of LEAR, we came out strengthened. When we left the factory with our flags and drums, thousands greeted us by chanting, "Here they are, those are the workers without a boss!", as we used to call out to the workers of Zanon (Zanon is a ceramic factory under workres’ control in Neuquen province) every time we went to support them. "Now you can hear it, now you can hear it, Lear, Donnelley, the same struggle"; "Unity of workers ". For years, we have been fighting for class unity to face these battles. Sunday was a sunny day, and we felt empowered by sharing the day with our families and the entire community of the neighborhoods close to the factory in a Solidarity Festival with bands and street musicians of the area. Seeing our children supporting us and in good spirits, it gives us strength.

After a weekend with great displays of class solidarity at the factory gate, we started our second week of worker management. We printed the magazines Para Ti Decoración, Para Ti Deco, Billiken, and Vanidades, among other publications of Atlántida publishing house. After several hours of hard work at the factory, we went home. The next day, despite being sleep deprived and tired, we returned to the factory with enthusiasm and full of energy, in a way we could have never imagined before. We greet each other every day with a big hug and we start to solve each of the problems left by the owners in order to produce with an immense camaraderie that is developing between us.

This week we received with open arms many colleagues who were undecided and frightened by the threats of our employer and of the human resource administrators – they had not approached us before. Today they are with us, as a comrade of the cafeteria said, "My place is with you all". Our determination and commitment is growing day by day. We maintain our relationships with clients. We organize the cafeteria and the infirmary thanks to our colleague Alcira. The women’s commission is in constant activity, collecting funds for the struggle and spreading the word about it at the factory gates, at universities and in neighborhoods. Whenever there is a problem they are there to help us move forward with high morale. They are always present at the factory gate. 24 hours. There are comrades who stay there, camping out. They stay the night with their children in tents outside the factory. Because their place is here, with us, in the fight. Thanks to the women solidarity is growing between neighbors, friends, students and workers from other factories that have provided us with food and money for the battle fund (fondo de lucha *spanish).

We hold a general assembly every day. We were already doing this before, under the dictatorship of the bosses. Now we meet to discuss how to organize production and every day we also talk about political solutions to holding on to the jobs and livelihoods of our families. For us this is a question of life or death. Because we know that for many, losing this job means never finding another one. The street is difficult. Many of us are already older, or we have worked for many years and we have occupational illnesses. Even president Cristina Kirchner says that the bankruptcy claim is fraudulent. For this reason we reject it and will not accept having the trustee, chosen by the judge, manage the business and its revenue. During an assembly we unanimously decided that our only way to keep our jobs is expropriation without compensation and nationalization under workers’ control. And we are moving forward establishing a plan for the battle that has as its foundation the fight to advance workers’ management, coordination with all sectors involved in the struggle on expropriation, winning the support of all of society, and the requirement that the union and all central unions, conduct a strike for the entire workers’ guild.

The government is trying to deny this perspective. Minister Tomada said Donnelley could not be nationalized because it is not a service company. This is false, because they nationalized Ciccone graphic firm. The government and the union want us to be a cooperative. But we, the workers, know this is not a solution, but rather it is a trap. The cooperative will cause us to exploit ourselves, and we cannot compete in the capitalist market, with multinational monopolies that have millions to invest in high-tech machinery, and who through FAIGA will unite to bring us down, because by demonstrating that we do not need owners to produce, we are a political threat to capitalists. In addition, many goods are imported. This can lead us to failure and we would have to sell the plant, as will happen with Brukman.

Selling to an entrepreneur is not the solution. The businessman K Szpolski, owner of several mass media companies, announced that he would buy Donnelley. In order to do this he will need to lay people off and change working conditions. We do not trust these entrepreneurs who buy bankrupt companies to end up stripping them of everything, as happened with Parana Metal or Massuh Paper Mill.

As Donnelley’s workers we know that this company is profitable and yields huge profits. Donnelley is a large printing firm. One of the most important in the country. The state must nationalize it, but it must be under management of the workers. We’ve already shown that we can manage the factory. We want to keep all jobs and use the earnings to have it serve the community, by printing textbooks, books, and academic journals that would be accessible to all sectors, especially to the most humble people who currently have no access to culture.

At the congress, along with the Left and the Workers’ Front (FIT), we presented a bill for expropriation without compensation and the nationalization under workers’ control of Donnelley, which already has the support of several deputies of different blocks such as el Frente para la Victoria (FPV), el Gen, Unión Popular, and we will continue collecting signatures. We know that we have to achieve expropriation and nationalization, by organizing a strong national campaign and by taking the fight to the streets.